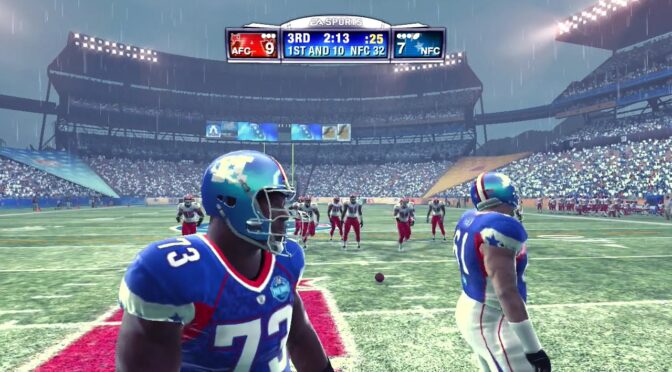 In perhaps the strangest development to come out of the strangest time of our generation, with actual real-life sports temporarily going the way of Blockbuster Video and Pauly Shore’s acting career, the betting world has turned to wagering on video games. And in case you’re saying to yourself: “dude, esports betting was around long before the Coronavirus” you may want to sit down for this because I’m not talking about betting on humans playing videogames. No, what I’m referring to is a simulation of a head-to-head matchup between two computer opponents competing in games such as Madden NFL20 and MLB – THE SHOW 20.

That’s right, you can now bet real money on a computer-simulated NFL tournament while watching the entire thing unfold on livestream alongside thousands of equally bored social-distancers. And if this is news to you and you’re currently having your mind blown, your head is really going to spin when I tell you this next thing. After spending the better part of the day yesterday watching multiple matches streamed live on twitch, some weird sick part of me actually prefers it to the real thing!

I know…I couldn’t believe it either.

But what can I say, with no commercials (oh my god the joy!), very little down-time in the action, and no inexplicable coaching decisions making my blood boil, something about the experience was strangely satisfying? And after winning my first two bets (Broncos over the must-fade Browns and Chiefs over the ghost of Philip Rivers’ past), I can say that I am officially hooked. And while I can’t pretend I have any sort of edge in simulation betting, it sure beat spending the day watching another subpar Netflix video, and that’s worth the price of admission in itself during these trying times. Though, if there ever a time to heed the age-old gambling wisdom “don’t bet what you can’t afford to lose”, this would most definitely be it.

With that said, today’s matchups include simulations of the AFC (-2.5) vs NFC Pro Bowl as well as two semi-final games featuring the KC Chiefs as 7.5 favorites over the Denver Broncos and Minnesota Vikings being 6 point dogs to Drew Brees and the New Orleans Saints. And while I like the two favorites in games where their opposition should have a tough time keeping up with their scoring prowess, a money line parlay paying about $76 for every $100 wagered seems like a fairly enticing bet as well. Because hey, while this pandemic can take away our freedom and sanity, I’ll be damned if I’m going to let it take away my ability to win or lose money on things I can’t control.

Stay safe out there and I’ll see you on the other side (of Twitch, where all games are streamed).

To get in on the action click on the sportsbook from inside your poker client and “sports sims” section. Then follow the action live on the “PrimeTimeAction” Twitch account.