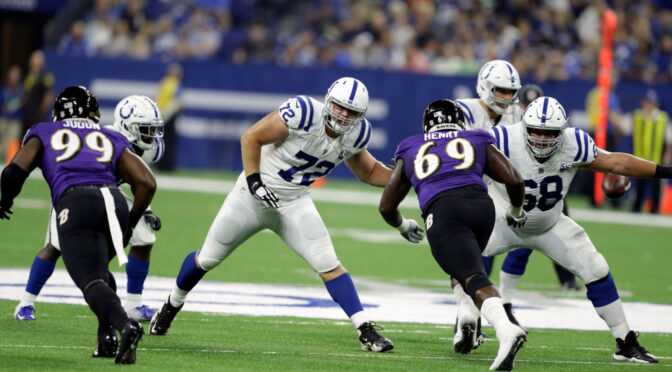 Regular readers of this column be warned, you might be in a for a bit of a shock this week. That’s because after 8 straight weeks of claiming the Indianapolis Colts are one of the most underrated teams relative to the market, this week I’m sitting squarely on the other side of the fence. That’s right, halfway through the NFL season, I am finally ready to oppose the Colts for the very first time by backing the Baltimore Ravens moneyline.

No, nothing’s changed on the field, the Colts still have one of top two offensive lines in the game, their defense remains a top 3 unit in a number of key metrics including yards per game and yards per play, and their turnover margin sits comfortably in the top 5. What has changed are two of the “metrics” my sports-betting and day-trading background has taught me to weigh more heavily than nearly any other: value-investing and public-sentiment.

Because while the Colts come into this game suddenly garnering market-wide social-media support after blowing out the Lions in a game that bookmakers had pegged as being much closer than it turned out to be, their opponents are coming off two of the most public losses of the NFL season against league-leaders Kansas City and Pittsburgh. Fortunately for Baltimore fans, as much as I believe in the Colts, they’re nowhere near the echelon of the Chiefs, and are likely still a fair distance away from the Steelers as well. For one, they rank just 10th in points per game compared to 2nd and 5th for KC and Pittsburgh respectively (and 8th for the Ravens), even while playing a significantly easier schedule than all 3 teams. To me this indicates that if the Baltimore defense that ranks 2nd in opponent points per play (again, even after playing both the Chiefs and Steelers) can give Lamar Jackson a few extra possessions, be it through turnovers or punts, the Colts may struggle to put enough points on the scoreboard to keep things close, particularly with WR1 T.Y. Hilton potentially set to miss the game with the groin injury that forced him out of Sunday’s win. After all, while Rivers was able to help the Colts put up 41 points while playing against a Lions secondary that ranks as the 10th worst in opponent yards per pass attempt, I suspect he’ll find moving the ball through the air much tougher against a Ravens unit that ranks second in the league in the same category as well as 4th in sacks per game.

So although it does pain me slightly to oppose the Colts after all the kindness they’ve shown my bankroll so far this season, the ability to simultaneously buy low on last season’s best regular-season team while selling high on a team with potential but in my estimation is not quite there yet is too good to pass up at these prices.

ADDENDUM: Since the writing of this article Baltimore CB Marlon Humphrey has tested positive for COVID-19, leading to seven teammates being placed on the reserve/COVID-19 list as ‘high-risk’ contact. Although all seven still have the potential to clear protocol in time for the game against the Colts, if any should end up being forced out, I’d like this bet a whole lot less and may even consider teasing the Colts up past the key number of +7 instead.