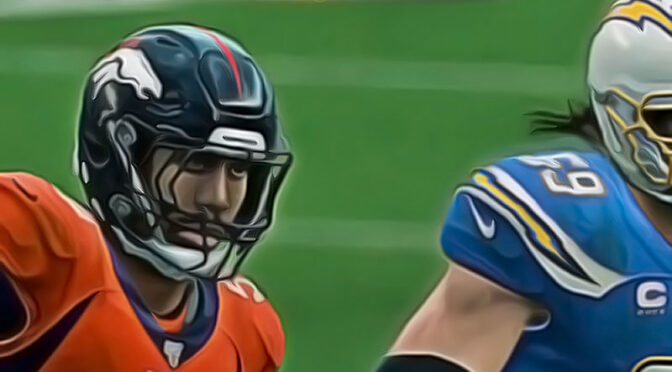 With another full NFL 2K20 SIMS schedule on tap for today, my attention was immediately drawn to a matchup between two teams that have been featured regularly over the past week: the LA Chargers and Denver Broncos.

In LAC’s 4 SIMS games, they’ve managed to split a couple of games against a powerful Patriots defense, took care of business against the Tennessee Titans and put up 23 points against the Chiefs before getting Mahomed down the stretch.

The thing with this virtual version of the Chargers is that they were actually projected to do quite well last season before getting stuck in some glitch-in-the-matrix type Groundhog’s Day simulation where they would fall behind early, make a heroic 4th quarter comeback, only to fall short on a last-second Rivers INT.

But on paper, which seems to be the only way we can gauge a Madden simulation, the Chargers actually have fantastic depth and match up well against most teams in the league.

Meanwhile the Broncos have been a SIMS seesaw so far, getting demolished by both the Chiefs and Saints while squeaking by Cleveland, Oakland, and Detroit. And while the Chargers don’t exactly fit into either ends of that polarized spectrum, I’d argue that (once again, on paper), they fall closer to the upper end than the lower. And with Denver leaning on a rookie quarterback against a solid defensive unit (say it with me: on paper), it seems to me that the “edge” (whatever that means when discussing a make believe sporting event), has to rest with the Chargers in this one.

With that said, history has taught me the dangers of laying points with a Rivers-led team – be they imaginary or not – making me prefer the Chargers moneyline, either straight up or as part of a two-team parlay. Because while LA is due to get their wins, they rarely make it easy on their fans or backers.

That’s it for today, stay safe out there and always remember not to be more than you can afford to lose.