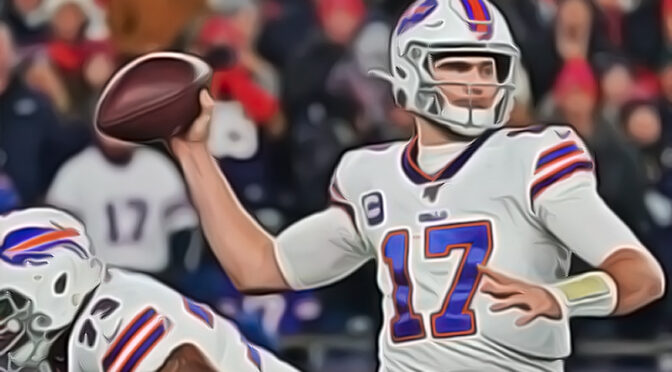 Yesterday I spoke about one team I expect to exceed expectations and today I want to switch gears and look at a team everyone is expecting big things out of that I think could under-perform again for a very specific reason, which I’ll look at momentarily: The Buffalo Bills. Currently the Bills’ season win total sits at over/under 9 wins, with the over costing -125 and the under offering coin-flip pricing at -100. But before we look at the very important reason the Bills will once again be at risk of disappointing over bettors, let’s look at the things they’ve done right so far.

Two of the Bills’ biggest needs coming into this off-season were getting a big-play receiver to pair with quarterback Josh Allen and adding depth at the cornerback position. Buffalo seemingly did well with both tasks, trading for maligned Vikings WR Stefon Diggs and snagging both Josh Norman and EJ Gaines to fortify an already powerful defensive unit. The Bills also had a decent, albeit unspectacular draft, getting solid value on A.J. Epenesa who slipped far too far down the draft board, as well as RB Zach Moss who should provide added depth (and an insurance policy) behind Devin Singletary. It did, however, not go unnoticed that the Bills elected to draft a quarterback in the 5th round, leading to speculation of just how big of a believer the organization is in current QB Josh Allen.

Speaking of which, shall we turn now to that big question mark hanging over Buffalo’s collective heads?

Of the 32 starting quarterbacks in 2019, Bills’ QB Josh Allen ranked as the single least accurate passer in the NFL, putting up a pathetic 58.8% completion percentage. Allen also ranked 26th in yards gained per attempt, 30th in yards gained per game, and 24th in QB rating – barely nudging out heavyweights such as Sam Darnold, Mitchell Trubisky, Mason Rudolph, Baker Mayfield, and Andy Dalton. All in all Allen finished the season dead last in accuracy inside the pocket, as well as near the bottom on throws to the middle, in clean pockets, and to tight windows. And while that should – in theory – improve now that he has a true outside threat in Stefon Diggs, if Allen should struggle putting the ball in his hands early, how long will it be before we can expect to see another implosion from the former Vikings ticking time-bomb?

Because no matter how good the defense is, or how much outside support the Bills can give JA, in this day and age QB play can and does make or break franchises – or as Bills head coach Sean McDermott recently said “how the quarterback goes, is how the team goes.” And while I do see a bright future for Allen down the road, after a strange off-season and likely even stranger new NFL normal thanks to ever-evolving Pandemic situation, I have a hard time believing this is the year he makes the leap from a bottom-of-the-barrel QB to one that can hang with the elites. Which is why, while everyone else rides the Stefon Diggs and Josh Norman hype, I’ll be looking to fade the public once again and take a shot at the Bills under 9 wins season total. HBU?