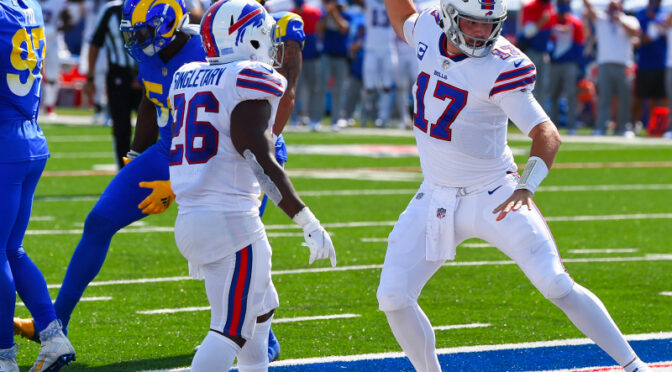 Although my general betting strategy when it comes to the NFL is to back teams I feel are being undervalued by the public, that is most definitely not the case in this one, with the 3-0 Buffalo Bills being near the top of most people’s ‘good teams’ list. However, while their ranking is rightfully high coming into Week 4, I was surprised to see their betting line opening at just -1.5 (now -3) after anticipating a a number as high as -5 or even -6. This makes me feel as though the Raiders are being heavily overvalued, which makes sense after the world watched them beating an (allegedly) Super Bowl contending New Orleans team on Monday Night Football just two weeks ago.

However, looking at Las Vegas’ game against New England last week – one they lost by 16 – feels like a much more accurate representation of what I expect to see in a matchup with a Bills team built in a somewhat similar fashion. Don’t get me wrong, Buffalo’s defense has not looked like the unit that stifled their competition last season – already giving up 28 points to the Dolphins and 32 to the Rams – but the players and system are all still in place, making me believe they’ll eventually put it all back together again and revert to the mean defensively-speaking. The good news for the Bills is that, unlike last season, they now appear to have an offensive unit that can provide their D some serious air-cover during their struggles, putting 93 points on the board in just 3 weeks while gaining the 2nd most yards per pass attempt in the league over that time, something that would have once seemed unthinkable considering Josh Allen’s well-documented accuracy struggles throwing it down the field. And with the Raiders tied for 2nd fewest sacks per game, Allen should have plenty of time to sit inside the pocket and pick the Las Vegas secondary apart play by play. Additionally, with the Raiders giving up 250 yards and 6.6 YPC on the ground last week, if Bills RB Devin Singletary can put up even half those numbers, that should open up more than enough space for Allen to continue his epic early-season heater and torch Las Vegas through the air as well.

As for the Raiders, their plan of attack seems obvious: attack the Bills via the rush where Buffalo has given up the 12th worst opponent-yards-per-rush-attempt – using their strongest offensive weapon in Josh Jacobs. However, if their defense continues to give up more than 30 points per game, Jacobs will need to put up a historic day just to keep things close, something I struggle to see happening considering the Raiders O-line is dealing with some serious injuries including Richie Incognito (IR) and RT Trent Brown continuing to heal a calf injury that will likely keep him out for at least another week.

All in all, there simply aren’t many places on the football field I see the Raiders as having a significant edge over the Bills, and with Allen and Co rolling on all cylinders offensively, I’ll be putting my faith in the Buffalo defense making the necessary adjustments and slowing down Las Vegas much like New England did last week.