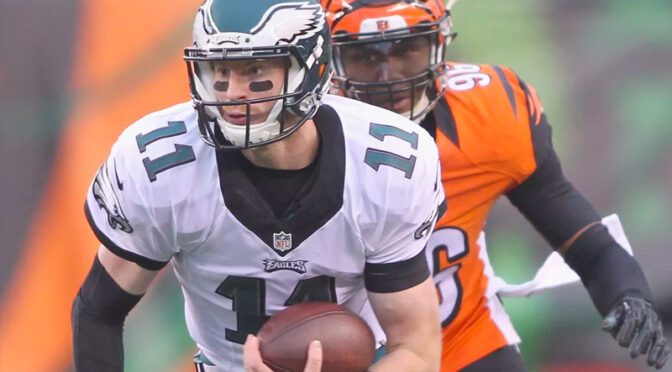 In last week’s breakdowns I focused entirely on spots where public perception was likely to be over-reactive to the action a week prior, and if not for a garbage-time TD by Cincinnati leading to a backdoor cover against the Browns in a game that was nowhere near as close as the final score indicated, we would have gone undefeated. But as a former poker professional, if there’s one thing I’ve learned over the years is not to let a bad beat derail you from a profitable strategy. So with that in mind, I’ll be looking to go right back to the well this week with another game primed for short-term overreactions: the Philadelphia Eagles vs the Cincinnati Bengals.

First off, don’t get me wrong, the Eagles have looked baaaaaddd so far losing to a team with no name and a good but not great Rams team. However, in Week 1 they didn’t have their lead-back in Miles Sanders or DT Javon Hargrave while giving up 8 sacks to a top 10 (if not 5) defensive line. In week 2 however, the Eagles began righting the ship, with Sanders putting up 131 yards with a TD and Hargrave beginning to reacclimating to the defense while only playing 36% of snaps. The offensive line also had a much better day as is evident by Sanders’ big day and the fact they gave up zero sacks to a defensive squad led by Aaron Donald. Of course, Carson’s two INTs didn’t help matters, but even still the Eagles had a chance to take the lead after falling back by 18 had Wentz thrown a slightly more accurate pass in the endzone or second-year WR J.J. Arcega-Whiteside made a bit of a better move off the break.

Now in week 3, the Eagles have a chance to redeem themselves, playing against a Cincinnati Bengals team who – in my opinion – remains much higher in recreational bettors’ minds than they should. Not only did folk-hero Joe Burrow only put up 115 passing yards before the final drive of Week 1, the Bengals needed a nearly perfect game (50% 3rd down conversion, 5/5 4th down conversion) just to avoid getting completely blow out by a Cleveland team that is likely worse than this Eagles team. I expect things to get tougher for Burrow this week facing a Philadelphia defense that was ranked 10 spots higher than the Browns ahead of Week 1. With Hargrave and Cox leading the way against Cincinnati’s weak offensive line (they ranked 31st by PFF, ahead of only the Miami Dolphins), I’d expect Burrow to be running for his life all day long, a less-than-ideal situation for a rookie QB still learning to read NFL defenses. And if the Eagles own O-line can continue giving Wentz and Co the type of support they did last week, he and Sanders should be able to carve up a Bengals defense that allowed the Browns’ RBs to gain more than 200 yards (and 3 TDs) on the ground and Baker Mayfield to put up 220 and 2 TDs on only 23 attempts.

All in all, I expect the Eagles to outperform their expectations in Week 3 and am happy to try to ‘buy the bottom’ on Philadelphia while simultaneously ‘selling the top’ on Burrow and the Bengals, both as a spread bet and as part of a two-team teaser.