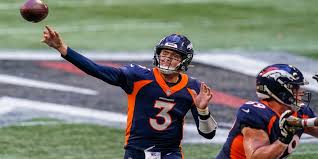 Wrapping up this week’s power-dataset plays, the Denver Broncos head to Las Vegas to face off against a Raiders team that’s been all over the map this season en route to a 5-3 record that includes huge wins against the Chiefs and Saints.

With an offense that has managed to put up a respectable 11th place ranking in yards per play, the Raiders’ fortunes have largely been tied to their defense which has struggled mightily while ranking just 27th in opponent yards per play, 24th in opponent third down percentage, and 19-22nd (4-way tie) in opponent red-zone percentage – giving up a touchdown on a whopping 66% of eligible drives. And although the Broncos have been far from an offensive juggernaut, they have started putting the pieces together in recent weeks, averaging 29 points per game over their last 2 games. In fact, the two offenses rank nearly identical in yards per rush attempt (4.4 for LV vs 4.3 for Denver).

Where things break down for Denver is in the passing game, where the Raiders rank 9th in yards per pass attempt vs the Broncos’ 27th. However, the gap has been closing over the past 3 games with both offenses ranking within 0.4 yards of one another. Additionally, with Denver’s secondary ranking 9th in opponent yards per pass attempt vs Las Vegas’ 24th, it appears as though the Broncos should be able to minimize the Raiders’ strong-suit while giving Drew Lock plenty of opportunities to continue building chemistry with 15th overall pick Jerry Jeudy – who many analysts are already calling one of the best route-runners in the NFL. Potentially getting two cornerbacks back this week back this week in AJ Bouye and Bryce Callahan should help the Broncos’ defensive efforts as well.

So although it’s probably the least comfortable bet included in the dataset outlined above, I do see some merit in selling high on the Raiders while crossing two key numbers in 7 and 10 via a two-team six-point teaser.