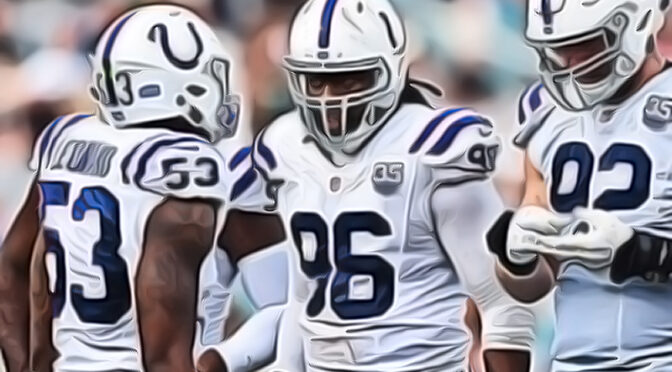 Yesterday I wrote about fading the Houston Texans and today I’d like to look at a season-long win total bet that has great hedge potential: the Indianapolis Colts o9.5 wins (+120 odds).

Of course, we can’t begin a discussion about the Colts’ 2020 chances without talking about the biggest move of their off-season, signing future Hall Of Fame quarterback Philip Rivers. Last season Rivers took a lot of flack from fanbases around the league after getting stuck in a game-script simulation glitch in which the Chargers would fall behind big early, make an unlikely comeback behind Rivers’ heroics, only to have him turn the ball over in the waning moments of the game. However, these Colts are built quite differently from that Chargers team, having made the offensive line a priority last off-season before the unexpected retirement of franchise QB Andrew Luck. And while Luck’s replacement Jacoby Brissett made a valiant effort and potentially could have led them to a post-season berth were it not for an injury that derailed a streak of 5 wins in 6 weeks, the analytics prove he’s no Philip Rivers. In fact, Rivers held a significant edge last season in true completion percentage, play-action completion percentage, red-zone completion percentage, and most importantly, in both pressured and clean-pocket completion percentages. That’s why, in my mind, putting a quarterback as accurate and cool under pressure as Rivers behind an offensive line built to protect should be a scary sight for Colts opponents.

Additionally, the Colts had themselves a solid off-season, making a big signing in DeForest Buckner – who has had 19 sacks over the past 2 years – as well as using their first two picks on offensive players in WR Michael Pittman & RB Jonathan Taylor – which should tell you what their focus will be this upcoming season (scoring lots and lots of points).

But perhaps the biggest factor in betting the Colts Over is that they’ll be coming into the season with one of the NFL’s easiest schedules with games against the Jets, Bengals, Raiders, Lions, Jaguars (twice!) and two more against both the Titans and Texans. Assuming they can at least split the pair against the latter two, that means they’ll need to find just two more wins against the likes of the Vikings, Bears, Browns, Packers, Steelers and Ravens to send Over bettors home happy. Not only that but Indianapolis’ schedule is completely back loaded, with just one of their first seven games being against a team that made the playoffs a year ago (at home vs Minnesota in week 2). This sets up a fantastic dynamic for Over bettors, allowing them to ride the team to a hot start early and then somewhat hedging the win-total bet via a Tennessee and/or Houston division-title bet once their price has been driven down by a Colts-happy market. Because while there still are some scenarios where bettors could lose both bets (for example, Colts winning a weak division with just 9 Ws), the ten-win marker has historically been a good indicator for a division winner (over the past four seasons only the 2019 Eagles and 2016 Texans won their division with 9 or fewer wins).

Finally, from a pricing perspective, at +120 odds Over bettors only need to be right approximately 45% of the time to break-even on the bet, so as long as we expect that to be an accurate likelihood over a significant sample-size, the bet is a mathematically sound one. Meanwhile, with Under bettors required to pay -140 or worse to get in the game, they’ll need a greater than 58% success rate to achieve the same break-even threshold. So if you think that likelihood is the more reasonable one, well…good luck to you.