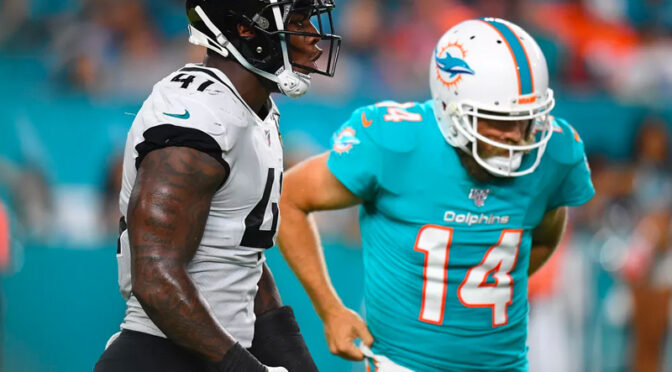 Let me start off this Thursday Night Football betting breakdown between the Miami Dolphins and Jacksonville Jaguars by saying that the edge seems fairly thin in this one and as such any bet taken is as much about giving yourself some semblance of a reason to watch such a horrifically scheduled game than it is about making money; an entertainment tax if you will. With that said, as far as sitting down to watch two terrible teams battle it out on the field, this one does have some storyline-merit to it with the wily veteran Ryan Fitmagic taking on last season’s hype du jour Gardner Minshew. In fact, if I could, I’d be much happier betting on some sort of Pro Bowl 1v1 skills competition between these two than actually watching the game, but alas, I can not, so on we go.

After winning a game in Week 1 against the Colts that they probably only win a handful of times out of 100 (if that) based on the box-score, Jacksonville managed to put up a strong offensive game against the Titans but got absolutely wrecked through the air for the second consecutive week, leading to the 4th worst opponent yards per pass attempt at a whopping 8.4 yards. And while the Dolphins only rank as the 22nd best team in YPA, they started off the season playing two of the best defenses in the league in New England and Buffalo, no doubt skewing those numbers to some degree.

Equally as important, Jaguars C Brandon Linder – who PFF has given the 4th highest grade for a center since 2014 – has been declared out for this one with a knee injury. Without a comparable replacement on the roster, Linder’s absence could have a hugely negative impact on both the running game and Minshew’s ability to stand in the pocket. And while I think Jacksonville will get their fair share of points regardless against Miami’s own atrocious defense, I have a hard time seeing how they’re 3-points better than the team who was only down a field-gate late into the 4th quarter against both the Patriots and Bills.

Finally, the early part of the season has historically been a very profitable time to back “bad teams” getting the all-important 2.5-3.5 points, with them having covered the spread 58% of the time for 13% ROI since 2005 including 11-5 on TNF and 20-9 last season.

So while it’s, as I said, more of an entertainment bet than a long-term profit one for me, I do still see enough of a sliver of edge to feel like I might just manage to outperform a coin-flip over a decent sample-size. And when you’re talking about the alternative of watching the Jags vs Dolphins betless, that seems like more than enough for me. Ergo, Miami +3. Godspeed.