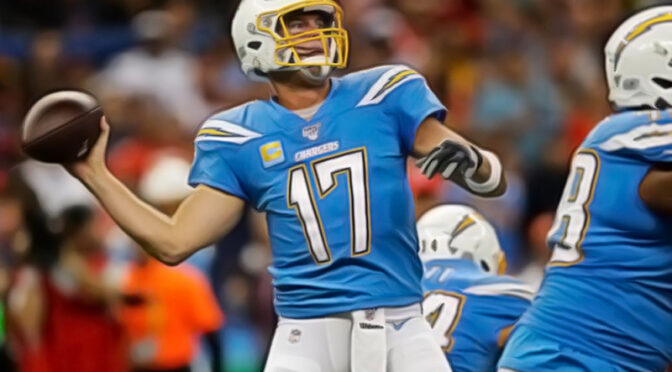 Yesterday I began covering some of my “2nd tier bets” – starting with the Indianapolis Colts winning the AFC South – and today we’re moving on to the AFC West to look at a team I think is good bet to exceed their season win total: the LA Chargers.

Currently bookmakers have the Chargers as a +110 dog to go 9-7 or better, meaning they’re expecting LA to clear 8 wins about 48% of the time, a significant improvement over their disappointing 5-9 record this past season. Speaking of 2019, roster construction-wise, the Chargers were already in a fairly good position having gone through last season with a lineup that was markedly better than their eventual results. And after officially moving on from the Philip Rivers era and drafting Oregon QB Justin Herbert with the sixth overall pick to (theoretically) back up Tyrod Taylor in 2020, the Chargers made big splashes in free agency – addressing some of their most pressing needs by signing CB Chris Harris Jr, OG Trai Turner, OT Bryan Bulaga, and DT Linval Joseph – each among the top of the class at their position and representing big upgrades over last year’s squad. Additionally, LAC traded back into the first round to grab linebacker Kenneth Murray who could potentially make an immediate impact if he lives up to their expectations.

So while there is some danger of the Chargers chalking up the 2020 season to a Justin Herbert development year if they should struggle early, they do get the luxury of having the 9th easiest strength of schedule in the NFL, with their opponents putting up a below .500 record of 126-130 last season, making the Over 8 Wins Total seem like a solid, albeit high-variance, bet to cover.