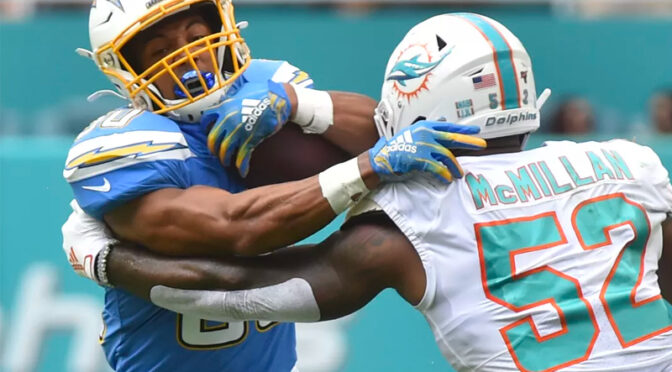 With the Miami Dolphins hype reaching levels not seen since their last playoff appearance in 2016, the conversation has shifted drastically over the past month and particularily this past week after Tua Tagovailoa led them to a second consecutive win, this time over the favored Arizona Cardinals. Meanwhile the LA Chargers continued to find new and creative ways to lose games, with their apparent final-second TD waved off after a booth review (perhaps the problem wasn’t Philip Rivers after all?). This dynamic – a much-hyped team facing one that’s coming off back-to-back losses – is perfectly set up for the buy-low/sell-high strategy that’s been so profitable for us all season long. But backing a losing team is not a +EV decision in and of itself, so let’s take a look at what the numbers say.

Miami’s recent success has undoubtedly taken place thanks to the resurgence of its defensive unit, which has helped the Dolphins achieve the league’s 4th highest turnover margin under the guidance of head coach Brian Flores and defensive coordinator Josh Boyer. However, as nearly every turnover-dependant team has learned over the years, turnovers are a notoriously fickle statistic that relies on luck just as much as skill, if not even more so (remember Chicago’s league-leading takeaway ranking in 2018 that fell all the way to 21st?) When looking at more easily replicable statistics such as opponent yards per rush attempt (in which Miami ranks 29th), yards per pass attempt (18th), and opponent red-zone scoring percentage (23th), the Dolphins’ defensive prowess perhaps begins to seem less menacing.

And although Tua no doubt did his part in last week’s win, Miami’s offense still leaves things to be desired, putting up the league’s single worst yards per rush attempt while ranking 17th in yards per pass attempt (with much of the success coming under Fitzpatrick), 14th in QB sack percentage, and 26th in third-down conversion percentage.

So although the Chargers defense has most definitely not played up to expectations so far this season, I do believe these teams are much closer to a pick’em than the current -3 line Miami is favored by and as such, I’m happy to fade the hype once again by backing the dataset discussed above while crossing both key numbers of 3 and 7.