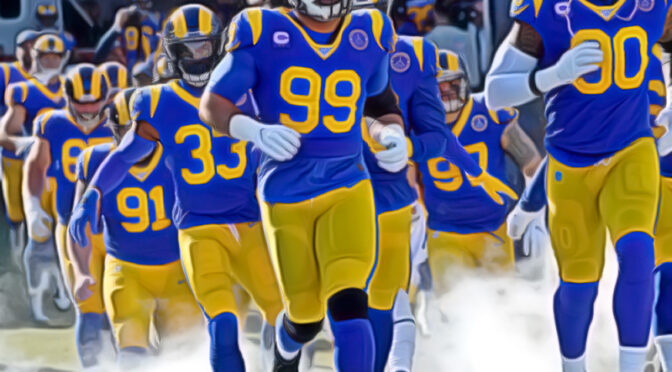 Yesterday I wrote about betting against the Raiders, and today I’d like to look at yet another under bet – though one I feel extremely on the fence about – the LA Rams under 8.5 win (-135 odds).

This one is tough because when the Rams are playing up to their potential, they have the talent – both in players and on the coaching staff – to be a force to be reckoned with, however a slew of bad contracts, departed players, and the unlucky misfortune of playing in an NFC West division that include the Super Bowl 49ers, constant powerhouse Seahawks, and much improved and sneakily dangerous Cardinals, that makes playing the Over relatively unappealing.

On the roster side, LA lost a huge impact player in Dante Fowler Jr. after he set a career-high with 11.5 sacks in 2019. And while they hope former Chicago Bears LB Leonard Floyd can pick up the slack, the two are not exactly comparable in skill-sets. Of course, Todd Gurley is also gone – having been released after a rough season in 2019 – leaving LA without a bonafide impact player in the backfield, even with the pickup of Cam Akers in the 2nd round of the NFL Draft.

Speaking of the draft, you have to be a little optimistic to like what the Rams did in this one, with LA using their 2nd pick to draft a slot WR that could have reps eaten up by Kupp and Woods (who both play their fair share of snaps at the same position), and using their 3rd pick to draft the fantastic but injury-plagued LB Terrell Lewis who missed 10 games as a sophomore due to an upper arm injury and then tore his ACL in 2018. Because while all three players could very well contribute (with Lewis offering the highest ceiling should he remain injury free), the Rams might have taken a few too many gambles for a team in such desperate need of stability.

Most pressingly though, the Rams need the offensive line that took a big step back in 2019 to dominate in 2020 after keeping the group mostly intact. If they can do that and manage to both buy Goff time in the pocket – something that was a big issue last season – as well as finally give Cam Akers some run support after he spent his final college season running for his life behind an atrocious offensive line in Florida State, the Rams will at least give themselves a shot to compete for that over 8.5 wins total. However, with LA slated to play the 7th toughest schedule based on projected win totals, and a number of huge question marks in play on both sides of the ball, this one feels at the very least like a bet to fade, if not one to bet against outright.