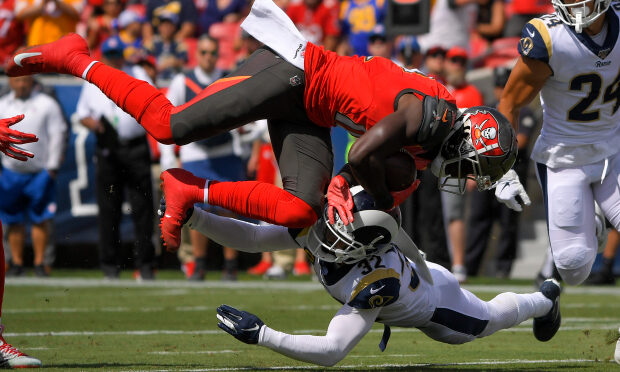 I’m not going to lie, the final play of Week 11 is a tough one. For Sunday, I see a couple of teaser plays that I like but don’t love (Vikings -1 vs the Cowboys being in the lead, with Tennessee +11 and Philadelphia +9 a distant second and third), while the rest of the schedule is lacking any obvious value as far as I can tell. In fact, the only thing I see left on the schedule that presents any at all – and it’s a relatively thin amount of it – is in the Monday Night Football matchup between Tom Brady’s Tampa Bay Buccaneers and Jarred Goff’s Los Angeles Rams, so let’s take a deeper look at that game now.

Although there’s a lot of statistical comparisons we can look at between these two teams, in my mind this matchup is really going to come down to one key area: QB pressure. More specifically, I think the key questions in this one are which QB will face more pressure, and which will be better suited to deal with it? That’s because with both these teams ranking in the top 5 of sack-percentage, this could be a game that is decided on making quick decisions and outperforming the opposing offensive-line. Unfortunately for Goff – who has a long and well-documented history of struggling on the road when facing pressure – he’ll be facing off against one of – in not the – greatest to ever do it who is no stranger to needing to bust the blitz. And for those who are (rightfully) saying to themselves ‘past results don’t guarantee future results’, as it turns out, the present seems to favor Brady as well.

Since the beginning of the season, Tom Brady ranks 4th in total yards when facing pressure, falling just 150 yards back of first place Josh Allen, while Goff ranks all the way down in 10th, and although that’s a bit of a misleading statistic considering they don’t get pressured at the same rate, the key for me is the two QBs’ sack-rate, with Brady only taking 1 more sack even with Goff having a significant edge in scrambling ability and having faced 16 fewer pressure attempts. Instinctively, this seems makes sense to me, with Brady being the obviously smarter and more polished game-manager who thereby possesses a better understanding of when and how to get rid of the football. This appears to be confirmed by the fact Brady has once again only thrown only 1 more INT than Goff, even while leading the league in pass-attempts compared to Goff’s 11th place ranking.

Additionally, with TB12 having far and away the better weapons at his disposal in the likes of Evans, Godwin, Gronkowski and Antonio Brown, even if Aaron Donald and Co can win the battle of the trenches, I suspect the combination of Brady’s abilities and Tampa Bay’s massive talent-advantage at the receiving position presents just enough edge to tip the scales in their favor, though if I can’t catch it at -3 by game-time (or tease down from 6+ if it should somehow get there), I’ll likely make this one of the handful of times per season that I’m willing to pay for a favorite’s moneyline.