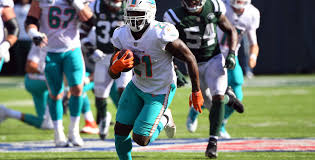 As far as setting up a future bet is concerned, things could not have gone any better last week with the Miami Dolphins somehow managing to lose a game (in ugly fashion) to a 3-6 Denver Broncos team, and the NY Jets busting the spread (thank you teaser-bet!) against an LA Chargers squad that almost let yet another lead slip away. Fortunately for those of us looking to take advantage of market over-reaction, this combination provides us with an opportunity to back a Dolphins squad that the entire market was insanely bullish on just one week earlier at a near-pick’em when used as part of a two-team teaser (though the -6.5 spread seems like a fine option as well).

That’s because, in case anyone has forgotten, when these two teams met just 5 weeks ago, the Dolphins absolutely demolished New York, shutting them out to the tune of a final score of 24-0 in which old man Flacco went 21/44 with 186 yards, zero TDs and 1 INT. So while Dolphins rookie QB Tua Tagovailoa suffered the first benching of his young career last week, this seems like a classic ‘get right’ spot for him and his team-mates playing what could very well be only the NFL’s 6th winless team since 1944.

So although the Dolphins admittedly looked awful last week, this seems like one of those spots where we avoid looking a gift horse in the mouth and simply shrug and bet.