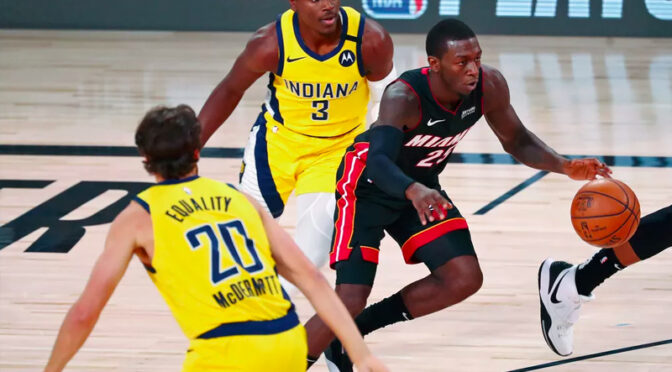 With the first round of the NBA playoffs having crossed it’s halfway mark, two Eastern teams (Boston & Toronto) have already secured their spot in round two, with another in the Miami Heat trying to do the same today.

The combination of outside shooting, perimeter defense, and an incredible young Center holding down the middle, Miami has completely overwhelmed the Pacers in a way few expected, though it seems a little unlikely that would have been the case if Indiana’s Sabonis were present and healthy. Still, injuries are part of the game when it comes to playoff basketball and nobody is shedding tears for teams that are unable to overcome it. And with Damontas slated to miss at least one more game (and likely a number more than that) after finally entering the bubble, it will all be for nought if the Pacers can’t find a way to steal one from the Heat and extend the series.

But on the heels of getting swept by the Celtics last post-season, the Pacers will have a terribly tough time avoiding the same fate against the same Miami team club-leader Jimmy Butler was chastised for choosing this past off-season. In fact, the signings of Butler along with Andre Iguodala and Jae Crowder have paid immediate dividends for a young Heat team that already possessed infinite raw talent in the likes of Adebayo, Herro, and Robinson and just needed some veteran leadership and playoff grit to help mould the future superstars of the franchise.

With that said, even after three consecutive wins, the Heat – who opened as 8-point favourites – saw their betting line immediately move to -7, with some books briefly moving all the way down to -5 before bouncing back, likely indicating some early sharp money on the underdogs. So while I do think the Heat have the edge in this game, and more so in this series, I’d prefer turning to my favourite NBA betting play in this one with a two-team teaser, effectively turning the game into a pick’em by combining it with another team like the Bucks or Lakers.