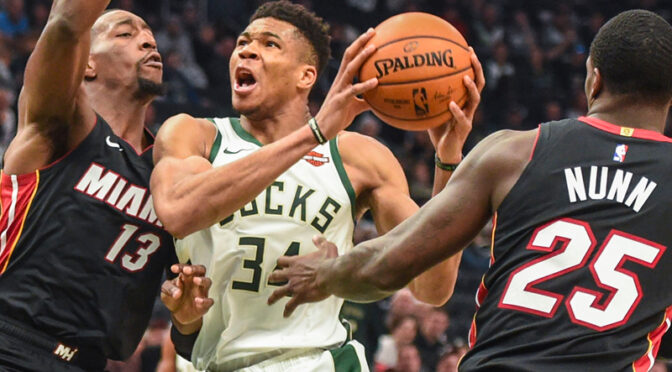 Of any team in the Eastern Conference, the Miami Heat far and away pose the most significant threat to the Milwaukee Bucks’ championship aspirations, a statement that would have been laughed out of the room a year ago when they pulled off a blockbuster trade to acquire former Sixers star Jimmy Butler. But as he’s done for seemingly decades, Heat endboss Pat Riley built a perfectly complimentary roster around Butler and is now bearing the fruits of his vision after taking a 1-0 lead on the undisputed kings of the East. But what makes Miami such a terrible matchups for the Bucks and will they be able to replicate their success over the course of a 7-game series?

To answer that we first have to consider Milwaukee’s defensive strategy, which can be summed up with one key statistic: opponent three-pointers taken per game. Not only did the Bucks lead the league in this category last season (meaning that they gave up more three-point attempts than any other team in the league), but they doubled-down this year and reigned supreme once again allowing an additional 3 attempts per game. For Milwaukee, the roadmap is clear: clog the middle at any cost using a combination of big-bodies like Giannis, Williams, and the Lopez brothers, and force opponents to beat them from the outside. Unfortunately for Bucks fans, this seems like an ill-advised strategy against a Heat team that barely missed out on clinching the top spot for three-point percentage this year, ending the season half a percentage point behind Utah at 38%.

Beyond three-point shooting, Miami also boasts a versatile defense anchored by Jimmy Butler and now Andre Iguodala, a wildly intelligent point-guard in Goran Dragic, and one of league’s premiere anti-Antetokounmpo weapons down the middle in Bam Adebayo. With all that going for them, it should be no surprise that the Heat were able to pull off the Game 1 upset and have started getting some real attention from casual sports-bettors across the NBA betosphere.

So now that we know why Miami pose such a danger to Milwaukee, the question becomes can they exact their edge over the course of a 7-game series. The short answer is yes, they can. They have the players, the coaching, and the leadership to make it happen. But in my opinion, whether they will or won’t will come down to two key factors: will they continue making 3s at the rate they have been and whether Bucks coach Mike Budenholzer can make the necessary adjustments to prevent them from lighting up his team from the outside.

For my money, although I won’t touch the series-price at this point, I believe over a 1-game sample the odds favor the reigning, defending champs of the East. As with all teams, the law of averages dictate that sooner or later the Heat are bound to have an off-shooting night in which they don’t shoot up to their percentages (they needed a 39% success rate to beat the Bucks last game, a slight uptick from their season average). When that happens, I believe the Heat will struggle to put up enough points on a Milwaukee defense that ranked as the single best defense in the league when it comes to opponent two-point percentage beating runner-up Toronto by a whopping 4 percentage-points. Additionally with last season’s coach of the year at the helm, the expectation is that the Bucks will make the necessary defensive adjustments by blitzing outside shooters more often than they’ve done so far this season, which should lead to tougher looks for Miami’s shooters much like they did with Duncan Robinson in Game 1, forcing the reliable outside threat into a 1-4 shooting day.

So although it’s about as uncomfortable of a bet as exists when it comes to backing the Milwaukee Bucks, my value-based and contrarian approach to sports-betting simply can’t help but fade the Heat at the top of their market.

Don’t let me down, Mike.