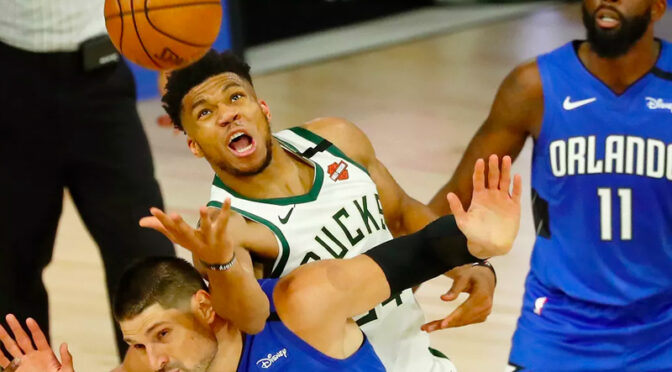 With the longest and strangest regular season in NBA history having finally come to a close, the NBA playoffs are now in full swing with the 2nd half of Game 2s scheduled for today. This post-season has already lived up to the madness that is 2020 with both number one seeds – the Milwaukee Bucks and Los Angeles Lakers – having already lost the first game of their respective series. And while the Blazers win is perhaps not as surprising considering they’re more or less at full strength and have been in playoff mode for weeks now, the same can not be said for the Orlando Magic who had no business beating the championship-hopeful Bucks while missing nearly half their team.

Fortunately for the Bucks, they’ll potentially have another crack at the short-handed Magic team with Aaron Gordon still listed as questionable at time of writing. But more importantly, than who they’re facing, Milwaukee will have an opportunity to play up to their season-long percentages after a terrible shooting night in Game 1 when they shot just 32% from behind the arc and 65% from the charity stripe, both below their season averages. Additionally, Orlando should be hard-pressed to replicate one of the best shooting nights they’ve had all season having exceeded their 27th-ranked shooting percentage by a whopping 6% (which, for reference sake, would have seen them rank 1st in the league by a mile) as well as exploding for a 94% free-throw percentage after putting up just 77% in the regular season.

I expect Mike Budenholzer, one of the best coaches in the league, to come up with an improved gameplan for minimizing Nikola Vucevic’s impact after allowing him to decimate the Bucks’ defense to the tune of 15 of 24 shooting for 35 points, which should put a ton more pressure on Orlando’s outside shooters – an area they have not excelled at all season long. Furthermore, it seems unlikely that Khris Middleton and Brook Lopez could be as ineffective as they were in the previous game with the two combining to go just 6 of 21 for 21 points. In a long season games like these will happen from time to time and while it was unfortunate for the Bucks to start the playoffs with this type of performance, the law of averages dictate that over a long enough timeline, Milwaukee’s shooting percentages should rally while Orlando’s should decrease.

With that in mind, I’ll be continuing to ride the Bucks through the first round while keeping hope alive that variance works itself out sooner rather than later.