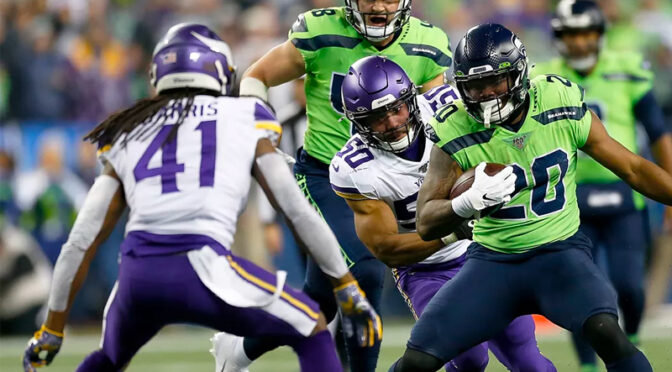 With a number of disappointing prime-time games broadcast nationally over the past couple of weeks, Sunday night of Week 5 should end the suffering with the high-flying Seahawks hosting a Minnesota team who Vikings’ fans will tell you hold a ton of unrealized potential. Most excitingly for football viewers who like big action and lots of scores, this matchup will showcase two of the bottom 5 secondaries in the NFL based on opponent yards per attempt, which should set the stage for non-stop back-and-forth aerial attacks.

With that said, while the Seahawks have embraced the new wave of pass-first offenses and (FINALLY) set Russell Wilson loose, the Vikings have not yet come on board, rushing on first down more than any other team in the league. And although a 1-3 record is never due to just one short-coming, we’ve seen what’s happened to NBA teams who haven’t adopted the 3s-first mentality, and unless things change in a hurry for the Vikings, they’re likely to follow suit.

This week in particular, facing a passing attack operating at historic levels, if Minnesota continues to force the ball to Dalvin Cook for the sake of “balance”, it’s hard to imagine how their defense will be able to get enough stops to keep them in the game, particularly with a wide-receiving core that is built almost entirely around one man (though Jefferson is no doubt doing a great job of changing that). This will be particularly true if Seattle cornerback Quinton Dunbar returns to the field this week, which he seems to be trending towards. And although the Seahawks pass rush has been awful so far this season, the Vikings might just be what the doctor ordered, having given up the 3rd highest QB sack percentage through 4 weeks, allowing Cousins to hit the turf on a whopping 9.09% of eligible opportunities.

So while there still are paths to victory for the Vikings (ie protecting Cousins while setting him free from his run-game handcuffs), the combination of Seattle’s league leading offense (based on YPA) and Minnesota’s league-trailing defense is just too polarizing for me to do anything but bet the Seahawks in this one, especially as part of two-team teasers and doubly so if the line moves to -6.5 allowing us to turn it into a pick’em via the 6-point teaser. Additionally, I’ll be praying for the Vikings to score first on Sunday night so I can add another unit on Seattle at a better price.