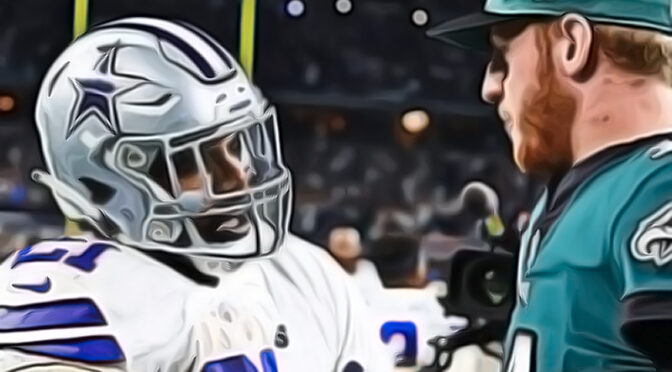 Yesterday I spoke about the Chicago Bears setting up to surprise people and today I want to go the other way and look at a relatively popular bet that still appears to offer some decent value: the Dallas Cowboys division-winner bet at -120.

First off, perhaps the biggest thing is that the Cowboys play in the NFC East, by far one of the weakest divisions in the league due its inclusion of both the Washington Redskins and New York Giants, neither of whom have a realistic shot at capturing the division (sorry, not sorry). That makes this division title bet a two horse race between the Dallas Cowboys and the reigning division champs Philadelphia Eagles. However, as much as I enjoyed the Eagles victory last season having placed a bet on them midway through the season knowing they had one of the easiest schedules over the last couple of months of the season, the win did feel a little bit like it should have come with an asterisk next to it after the Eagles benefited from some world-class ineptitude by the Dallas Cowboys in closing out what should have been an easy road to the playoffs for them. And while I may not have a crystal ball, I find it hard to believe that will be the case again this year with Jason Garrett gone and Mike McCarthy now leading the way.

Not only is McCarthy a wildly better head-coach that Garrett – and one who should command a whole lot more respect and effort out of the Cowboys’ locker room – but Dallas has had one of the better off-seasons in the NFL, going out and making huge defensive upgrades to the roster in the form of Bears safety Ha Ha Clinton-Dix (who played for McCarthy in Green Bay), former Pro Bowl DT Gerald McCoy, and DT Dontari Poe. Dallas also fortified the backup quarterback position by adding veteran Andy Dalton, a signing that will not go unnoticed should Dak Prescott be forced to miss time at any point. Additionally, Dallas had arguably one of the best drafts in the league, getting a ton of value with WR Ceedee Lamb, CB Trevon Diggs, and DL Neville Gallimore in the first 82 picks and even more so in the later rounds with C Tyler Biadasz and DE Bradlee Anae. Meanwhile, their only true opponents in the division the Philadelphia Eagles have to be graded as having a worst off-season, even with the signings of CB Darius Slay and DT Javon Hargrave.

All in all, Dallas – the team that was the best in their division everywhere but on the scoreboard last season, have seen significant improvements over the past couple of months, both in on-field talent and at the management level, and will have the third easiest schedule in the NFL behind only Baltimore and Pittsburgh, with their opponents putting up a combined record of just 117-138-1 in 2019, making them one of the only popular public bets that I’ll be riding with as well.