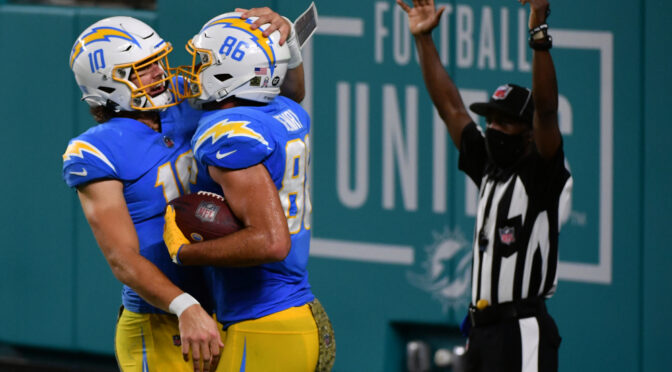 So far this week we’ve already seen two strong buy-backs on the Chargers, once at -8 and once at -7.5, with the line now resting at -9. It seems clear to me that the early-week sharps like Los Angeles at about the touchdown mark, which gives Chargers bettors two options: stay alert throughout the week and look to buy the next opportunity at those levels, or utilize my favourite bet – the two-team six-point teaser – that allows us to both cross a key number of 7 and get all the way down to its counterpart at -3.

But following line-movement is not a profitable strategy in and of itself, so let’s dig deeper into this matchup.

Although it seems a bit silly considering who we’re talking about, there is some validity to the idea of ‘selling high’ on the NY Jets right now after two of their last three games turned into unexpected thrillers (at least score-wise) against the Patriots and Bills, both of whom failed to cover the spread. Meanwhile, in my mind there’s not a single better ‘buy low’ candidate than the LA Chargers, who have dropped 3 straight against the likes of the Dolphins, Raiders, and Broncos (yes, those Broncos). Because while their record is suffering and their fans are tilting, the Chargers’ statistics seems to indicate they shouldn’t quite be doing as poorly as they have.

In fact, the Chargers defense ranks as the 4th best unit in terms of opponent time of possession, 8th in opponent redzone scoring percentage, and 10th in opponent yards per pass. Where things break down for LA defensively is in the run game, with their unit ranking 26th in opponent yards per rush. Fortunately, this week they’ll be facing off against a team that ranks 20th in yards per rush and 27th in total rushing yards per game while also ranking dead last (by a long mile) in yards per pass attempt. And with Sam Darnold out again, I see yet another ‘sell high’ angle opposing Old Man Flacco coming off his best game in years, as I expect him to revert back to the mean after putting up a QB rating of 12.2, 64.3, and 16.3 in his first 3 starts before jumping all the way up 128.7 against New England.

So while it’s likely optimal to wait for the betting-line to get back to the sweet-spot if you’re looking at betting the Chargers ATS, I’m happy to bring the price down to -3 while pairing it with another team covered in this week’s columns.