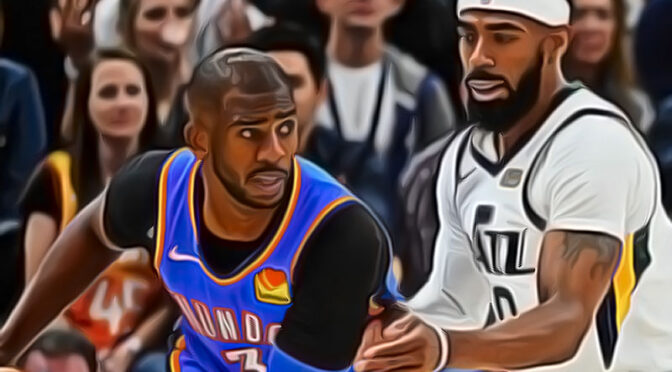 When betting SIMS games so far, I’ve found some decent success looking at teams that either under or over preformed preseason expectations “irl” before the pandemic locked us all in our homes and making my bets based on those expectations rather than the regular season results. When you think about it, this makes obvious sense as the game developers weren’t privy to team chemistry or outlier performances when building the game.

And while it most definitely doesn’t make it a “lock” or sure thing, conceptually speaking, nowhere is this idea more applicable than in today’s matchup between the Utah Jazz – who were widely considered to be a Western Conference title contender after making some key off-season acquisitions but ended up struggling to put it together in the first half of the season – and the upstart OKC Thunder who nobody outside Oklahoma expected to even sniff a playoff race after trading away two of the best players in the league but put themselves in contention thanks to the strong play of Chris Paul and SGA.

So although the current SIMS betting line of Utah -7.5 might make some sense based on the final few months of the pre-COVID season, 2K game developers likely would have had the Jazz as significantly larger favourites in this one, a theory that’s supported by the fact that their two SIMS matchups so far have seen Utah beat title contender Denver by 18 as well as these very same OKC Thunder by a whopping 30 points.

Of course, in sports the past is nowhere near a perfect predictor of future success – especially when discussing an imaginary game – but with a lack of a better process for analysis, I’ll be sticking with this one for the time being and adjusting as needed as our SIMS sample-size grows.