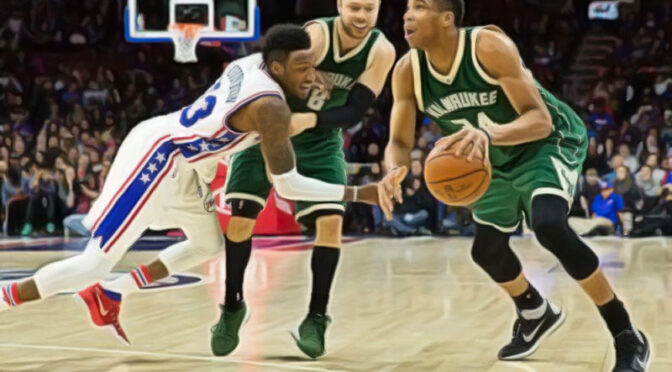 Last week I discussed the sports-betting concept of chasing value on the underdog when expecting an overwhelming majority of the action to pour in on the favorite, a strategy that led us to a great SIMS win fading the popular Kansas City Chiefs against the Carolina Panthers. Today a similar situation presents itself, but this time taking place on the virtual hardwood with the destructive force that is the NBA2K Milwaukee Bucks taking on the so far less-than-reliable Philadelphia 76ers.

If you’ve been following this NBA SIMS season, you’ve likely witnessed reigning MVP Giannis Alphabet and the Bucks demolishing team after team, routinely covering spreads in the mid-to-high twenties. The combination of Milwaukee’s front-court size, outside shooting, and Giannis’ 97 rating (which has him tied with Harden and LBJ for the league lead), has helped the Bucks overwhelm their competition and handsomely reward their SIMS backers. Meanwhile, the road for 76ers bettors has been a little rockier, with the team sandwiching some huge wins between lackluster efforts (at least 2K got that part true-to-life!).

So while it wouldn’t at all be surprising to see the Bucks win this one by 30 – in which case I’d likely still bet the Sixers again next time because value is value – backing a legit championship contender getting double-digits in a game where the public will be heavily invested in the other side is the type of risk I’ve learned to not only stomach, but actually relish.