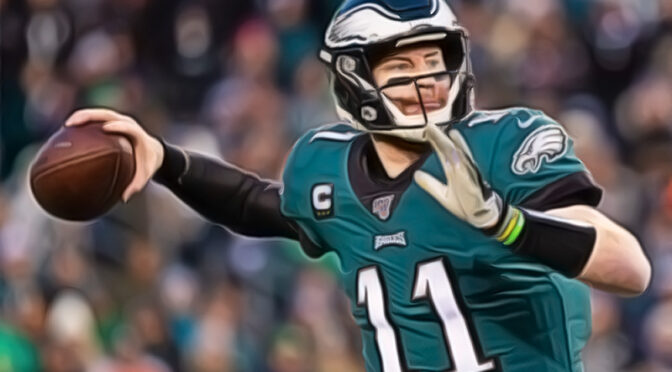 Today I’d like to outline why I believe the Philadelphia season-win total of 9.5 offers decent (but perhaps not great) value in favor of the under. Firstly, let me admit that it’s tough to bet against a team in the NFC East thanks to the luxury of getting to play four games against the Washington Redskins and New York Giants, an argument I used to support betting on the Cowboys yesterday. However, the Eagles are in a much different position than a team like Dallas, having gone into this off-season with significant needs in the wide-receiver, linebacker, and safety positions. And while they did address those issues somewhat in the draft, counting on rookie players like Jalen Reagor, Davion Taylor, and K’Von Wallace to make an immediate, win-adding impact – especially while losing a player like Malcolm Jenkins on the defensive side of the ball – seems like a bit of a reach.

And when we take into account the bizarre drafting of Jalen Hurts in the second round, it seems to me that a much more likely scenario will be Philadelphia using this year as a development year while installing the speed-based attack that their off-season signings and coaching hires hint at, particularly if Carson Wentz deals with further injury concerns. Not to mention that although the Eagles definitely have softer spots in their schedule, four of their final six games will be against contenders in Seattle, Green Bay, New Orleans, and Dallas, with another against an Arizona Cardinals team that should see further improvements with Kyler Murray now throwing to DeAndre Hopkins and some solid off-season additions on the defensive side of the ball as well.

All in all, my projections have the Eagles slated to be an 8 or 9 win team, making the under 9.5 at -103 odds seem like decent value, though I will say that the aforementioned coaching hires should offer Eagles fans some hope in the long term, the question is whether it translates to the standings in 2020 or 2021. And while this feels closer than some of the other bets I’ve covered on this blog, my money’s on the latter.