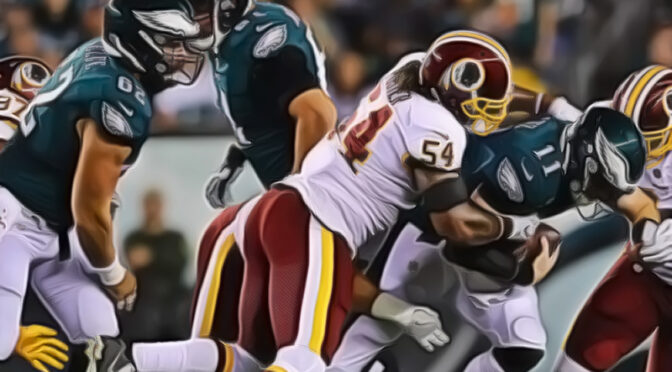 While it’s true that I have both the Philadelphia Eagles and the team currently known as the Washington Football Team (owner Dan Snyder really missed a golden acronym opportunity not switching the order of those final two words) pegged as ‘under’ teams when it comes to season-long win totals, readers of the blog will know these were two of my least confident calls this off-season; in fact, Washington was the only team-total I legitimately flipped a coin for because it was just that close for me. And now, as if those weren’t big enough struggles on their own, I’m now left with the unenviable task of choosing between them in a week  one matchup nobody outside those two cities is interested in seeing. The question, obviously, isn’t who the better team is, we all know that honor belongs to the Eagles. Rather, what we as sports bettors have to attempt to figure out is which side presents the bigger betting value when it comes to the spread, which currently sits at Philadelphia -6 indicating the Eagles are 9 point favorites when accounting for the standard -3 point hit for being the away team.

For Washington fans the positives are clear: Ron Rivera is a huge step up from the two-coach combo the Redskins rolled out last season, new offensive coordinator Scott Turner can do nothing but improve some of the horrific play-calling decisions that plagued Washington’s offense in 2019 (hint: more play-action!), and adding some TE talent in the (hopefully) healthy Richard Rodgers and Logan Thomas might provide Haskins with the security blanket he so desperately needs. Additionally, with all three of Washington’s top three wideouts being rookies last season, the hope is that 2020 will see a significant upgrade in their collection abilities. Drafting the versatile pass-catching RB/WR/KR Antonio Gibson could also end up being a big boost to Haskins in the passing-game if the rookie can replicate some of his college success out of the backfield.

As for the Eagles, over the past couple of seasons’ the team’s luck came down almost entirely to wide-receiver health, with Philadelphia coming up lame in that department in both 2018 and 2019. In fact, that Carson Wentz was able to have the type of season he did and somehow managed to will his team into the playoffs without his top 3 receivers for large parts of the season was nothing short of miraculous, no matter what the Twitter warriors will tell you. With the WR core now (allegedly) healthy, and a treasure chest worth of receivers picked up in free agency and the draft as a “this ain’t happening again” insurance policy, the Eagles are hopeful their receiving woes are finally behind them. However, with good news does come some bad as Pro Bowler and offensive-line anchor Brandon Brooks has already been lost for the year after tearing his Achilles this off-season. And while the Eagles made some huge gains on defense with the signings of Slay, Hargrave, and Robert-Coleman, the safety position is a huge concern and may become a favorite target for opposing QBs.
With all that said, the question remains: what do we do about this week one matchup?
Of course, whenever the edge in a betting matchup is unclear, the option to fade the game entirely should be a serious consideration; but for those who absolutely need to get their fix in, I’m going to have to buck the obvious bet on the favorites and side with the unnamed team, who should – if nothing else – be able to catch their first few opponents by surprise with some brand new offensive sets and strategies from the mind of Scott Turner. And when we factor in the fact that the betting line opened with the Football Team listed as 7.5 point dogs and quickly moved to the current line of just 6 points, it seems that the sharps may also be expecting Washington to outperform expectations coming out of the gate, at least as far as the spread in concerned. So while it’s not a game I’ll be laying multiple units on, I feel OK taking my first punt of the season on Riverboat Ron while potentially adding the No Names to a two-team teaser as well.
Yaniv Son is a long-time sports-bettor and former professional poker player turned poker coach and author at spinandgostrategy.com