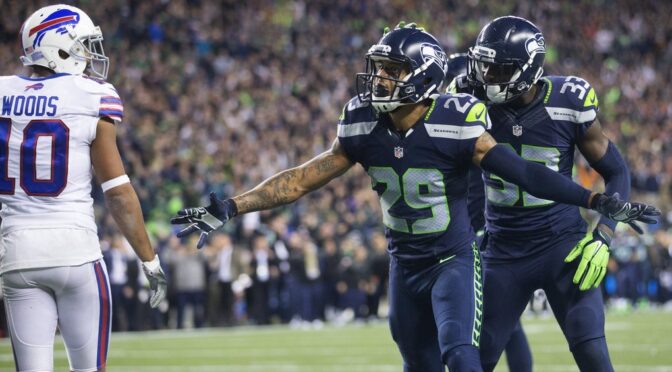 Continuing on with the strategy of selling-high/buying-low that’s been so fruitful for us this season, the game between the Seattle Seahawks and Buffalo Bills appears to be one of the better candidates on the board for Week 9 in part due to the fact that the Seahawks suffered a very public overtime defeat against the Cardinals last week while the Bills managed to put together their second consecutive victory against Bill Belichick and the New England Patriots. However, digging deeper into the boxscores from Week 8, it seems clear that Seattle’s game was one they should have won, outpacing Arizona in total yards, yards per play and time of possession, while Buffalo was fortunate to escape with a W – even against a highly depleted Patriots roster – thanks to a Cam Newton fumble at the 11 yard-line on the potential game-winning drive.

In fact, Buffalo as a whole has suffered incredible regression from last season, with their once proud defense that ranked as the 2nd best unit in opponent points per play in 2019, sitting at just 18th place so far this season, even after having played the aforementioned weakened Patriots, Dolphins, Raiders, and bottom-dweller Jets twice. This will likely be a problem against the single most powerful offense in the league under that same metric, with Seattle putting up a whopping 0.532 points per play (including 0.51 ppp on the road, the highest mark in the NFL as well).

Offensively, things don’t look much better for Buffalo, with memories of the 4-0 start fading into oblivion as early-season MVP candidate Josh Allen has reverted to his old ways putting up some of the worst numbers of any QB over the past 4 games when it comes to completion percentage on throws over 10 yards. And while Bills supporters might say that’ll be less of an issue against a Seattle secondary that ranks as the sixth worst in opponent yards per pass, it sure wasn’t against the Patriots, who rank as the second worst unit under that same statistic. So with Buffalo ranking just 23rd in opponent passer rating, I’ll happily take my chances on the better QB/WR combo while giving up less than a field-goal and will likely consider adding to my bet in-game if Seattle should fall behind early.