The poker world has a rich vocabulary, which is glorious for people “inside” the game, but maddening for laypersons listening to us: “So I binked my gutter on the river, checked, she bet half pot, I clicked it back, she ripped it, and obviously I snapped her off.”

Anyway, thanks in large part to legendary vlogger Ethan “Rampage” Yau, “punting” is now a standard part of the poker lexicon. It’s just what it sounds like – somebody is tossing money up in the air with no meaningful plan of getting it back – all you have to do is catch the ball chips.

“I jammed with top pair, top kicker, and obviously ran into a set. It was a total punt.”

Along with that, you can “catch punts”: “He was three mai-tais deep, and had just won a $10k sports bet. So we sat there for two hours and caught his punts.”

Which brings me to a 6-card PLO/8-or-better game I was playing on an online platform last night (hey, don’t knock it until you’ve tried it). I was playing one stakes level above my usual, just to see if the competition was tougher, and if so, how much.

As I’ve written frequently, split-pot games are a target-rich opportunity to make money at poker. The core principle of any split pot game is to win the entire pot, not half. Alternatively, it’s acceptable to have a mortal lock on half the pot, while multiple other players add to your equity while battling for the other half. If you have some equity in that other half, so much the better.

So there I am in my 6-card PLO/8 game, battling with the guys and gals at this new higher stakes game. And frankly, I wasn’t impressed – they weren’t making all the mistakes I wanted them to make. When there was a big all-in, both players had strong equity. There’d be a raise preflop, and everybody would fold, suggesting that folks had meaningful starting hand quality requirements. Hands that would look huge to a hold’em player were getting checked down on the river (as they should in a 6-card PLO game). I was down a few dollars, or up a few dollars, and feared that the big winner in the game was the rake. I was about to call it quits, when two new players joined us.  Interestingly, both bought in for only 75 big blinds. That’s rarely the sign of a crusher in these games. I sat up a little straighter in my chair.

And sure enough, both these creatures (one a robot, the other a frog) had not come to fold. They were in lots of pots, with some questionable values. One of them hit a miracle river card to scoop a big pot. Now I was engaged again.

You don’t always get a chance to catch punts, even when the punt team is on the field, but this time the cards cooperated. I found myself with a monster starting hand – three Broadway cards and four wheel cards. Wait, what? Tricked you: A♣Q♦J♦5♣3♠2♥. I potted it from the small blind. One of the new players, who had limped in, called the raise. I flopped the world – 9♣4♣7♥. So I had the nut flush draw, a gutshot to a cheap straight, and an uncounterfeitable nut-low draw. Pay attention to the nut low draw here: if any non-pairing low card came out, I had the nut low, and would be freerolling for the whole pot. I bet the full pot because the villain had started with 80 BBs, and I wanted them all in the middle, quickly. Sadly, Frog just called.

The turn was perfect: the T♣, giving me the nut flush, but completing a couple of straights (and any non-nut flush). I checked. I wasn’t afraid of many river cards, and I thought Frog might bet.

Which they did, for full pot.

I gleefully raised for all their chips, and they snap-called. I figured we’d be racing, one way or another. But a funny thing happened. On this platform, you can run all-ins multiple times. But the software didn’t offer us that option. Oh, huh – my opponent had zero equity. They had the king-high flush with no redraws and no low draw.

They didn’t rebuy, and I left when the blinds got to me – I’d learned my lesson.

There are hard and easy ways to make money at poker. You can bash your head against players who are making few mistakes, but such situations often benefit only the house. If you have any positive expectation, it’s small, and tied up in a storm of variance. Or, with good game, table, and opponent selection, you can stand on the ten-yard line, enjoying the bright autumn sunlight.

And wait for the punt. 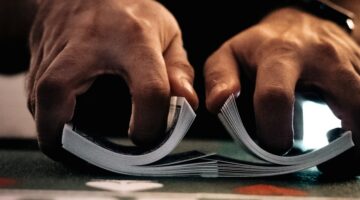 At the table with Happy 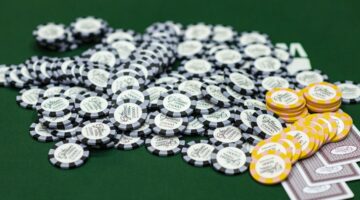 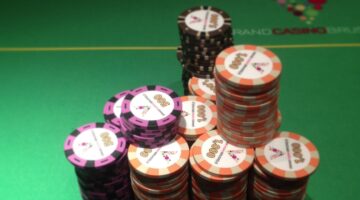 To shove a draw?