Threads on the TwoPlusTwo poker forums and Twitter accuse conspirators in a high-stakes home game of cheating by using a card-reading device disguised as a smartphone.

The thread starter by “jaycutlerpkr” lays out allegations of a high-stakes home game ran by Taylor Von Kriegenbergh, in which a player by the name of “Stu” used a card-reading device.

“Taylor Von Kriegenbergh (pictured in seat 9) ran two games where the cheating happened in the Benjamin in Boston in December 2019 before getting caught by a player in the game,” states “jaycutlerpkr” in the thread. “Several players lost six figures to the cheater (Stu, see in picture).”

“A popular way of cheating was used that was popularized in the 2016 Def Con, in which the cheater employs two phones that read the deck (placed in front of the stacked two phones and uncut before dealing) and an ear piece that tells the cheater which hand wins. This is a PSA for the poker community. Anyone interested can reach out for the picture that exposes the cheating.”

A few posts down, another user, “Ten5x”, posts the picture apparently referred to by “jaycutlerpkr” and shows a player in seat one with two smartphones stacked on top of each other, with a timestamp of Dec. 4, 2019. Another poster later links to a YouTube video from the Defcon 2016 technology convention about how such a device can read a deck of cards in a live poker game.

“jaycutlerpkr” wrote in a later post that Von Kriegenbergh admitted to running the game while knowing about the cheating.

“Taylor Von Kriegenbergh has admitted to cheating on a recording and the picture can be provided privately as it concerns the privacy of other players,” reads the post.

Jiang, a Boston poker player, and a three-time WSOP Circuit Ring winner, took to Twitter to further clarify the cheating allegations. Jiang stated in the Oct.15 Twitter post that he was cheated out of $90,000, with two other players losing more than $100,000 each in the corrupted cash game.

I was cheated out of 90k over two sessions at Taylor’s game. Two others were cheated for over 100k each. As far as I know no reparations were made and the game shut down. Thread. https://t.co/rQic767Meo.

“I was cheated out of 90k over two sessions at Taylor’s game,” Jiang states in the tweet. “Two others were cheated for over 100k each. As far as I know, no reparations were made and the game shut down. ”

The Twitter thread caught the attention of several other players, some of whom appeared to have knowledge of the game itself and/or the device used for the cheating. The thread also prompted a back-and-forth between Jiang and longtime poker player and commentator Tony Dunst. 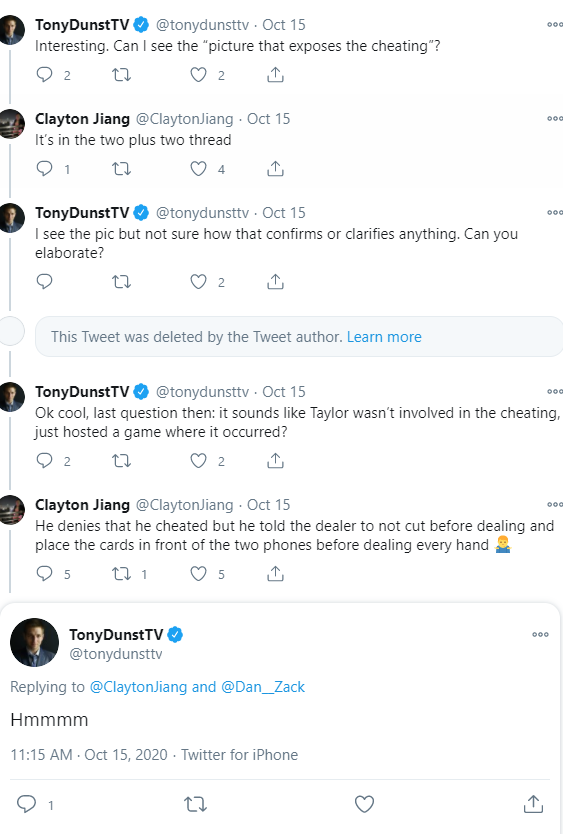 Dunst asks to see the photographic evidence of the cheating, to which Jiang refers back to the photo posted on TwoPlusTwo. Dunst then poses the question of whether Von Kriegenbergh himself cheated, or was only involved in running the game with knowledge of cheating.

“He denies that he cheated but he told the dealer to not cut before dealing and place the cards in front of the two phones before dealing every hand,” Jiang tweeted back in reply.

Poker.org will continue to update this situation as more details unfold.