Cryptocurrency Buying Trends in the U.S.

Cryptocurrency and especially Bitcoin are well-loved and used by poker players worldwide. But aside from online poker buy-ins, Bitcoin and other digital currencies are quietly making inroads into dozens of other niche economies.

As cryptocurrency’s popularity in the U.S. continues to grow, it’s not just an investment anymore. Increasingly, consumers see it as a viable payment method for clothes, food, and even lottery tickets. Daily transactions have grown rapidly to over 300,000 a day in 2020, with major businesses like Microsoft, KFC, and Twitch accepting Bitcoin.

Cryptocurrency is digitally created money. Made with encrypted blockchain technology, cryptocurrencies are virtually impossible to counterfeit. Bitcoin is the most well known, backing over a million financial transactions per year worldwide. A growing list of cities and businesses accept the new electronic money.

What Are People Buying With Cryptocurrency?

Cryptocurrencies like Bitcoin can be used to buy a wide (and growing) range of goods and services, including furniture, NBA tickets, restaurant meals, and jewelry. Increasingly, traders and investors see bitcoin as a sound investment. In 2020, the financial services industry accounted for over 26% of BitPay payments. Online transactions were a close second with 24% of the take, and other industries like prepaid cards, VPNs, hosting, computer games, and consumer electronics took small shares of the rest. 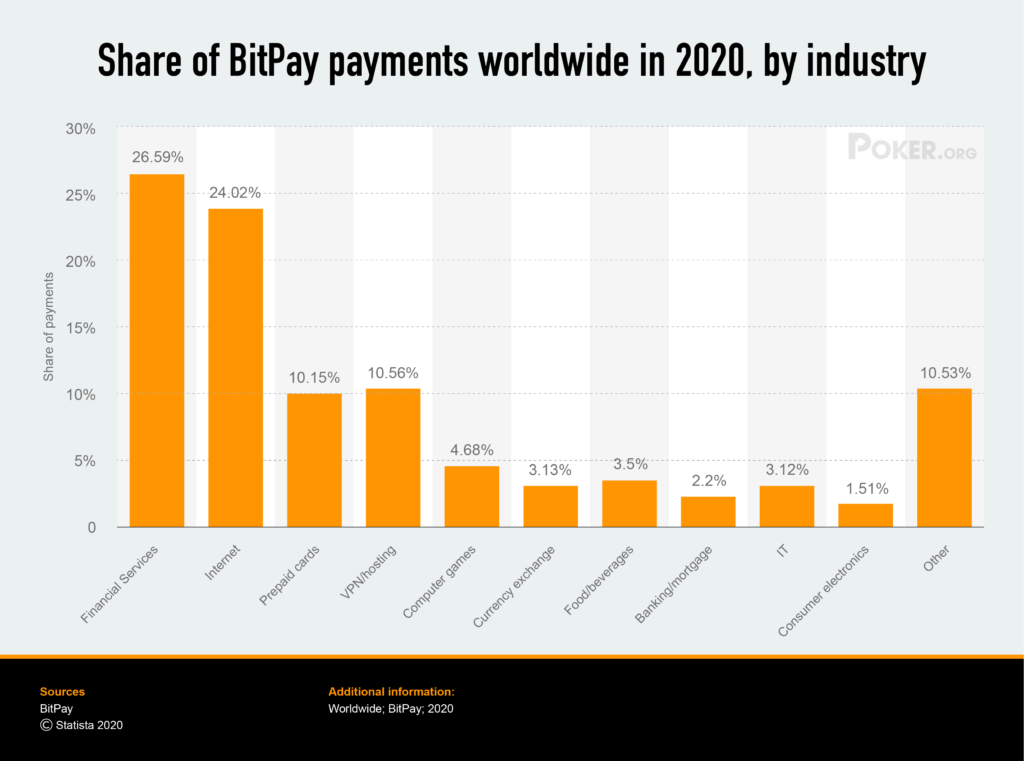 Since 2016, daily Bitcoin transactions have grown by 50%, from 200,000 in Q1 of 2016 to over 300,000 in Q2 of 2020. There are now more than 18 million bitcoins in circulation, with Facebook’s asset-backed stable cryptocurrency set to shake up the digital money arena in late 2020. As AI integrates with blockchain tech, cryptocurrencies will become ever-more secure. Meanwhile, Bitcoin and its cousins have caught the eye of the U.S. Federal Government, with the introduction of the Cryptocurrency Act of 2020, intended to smooth the progress of cryptocurrency as it enters our daily lives. 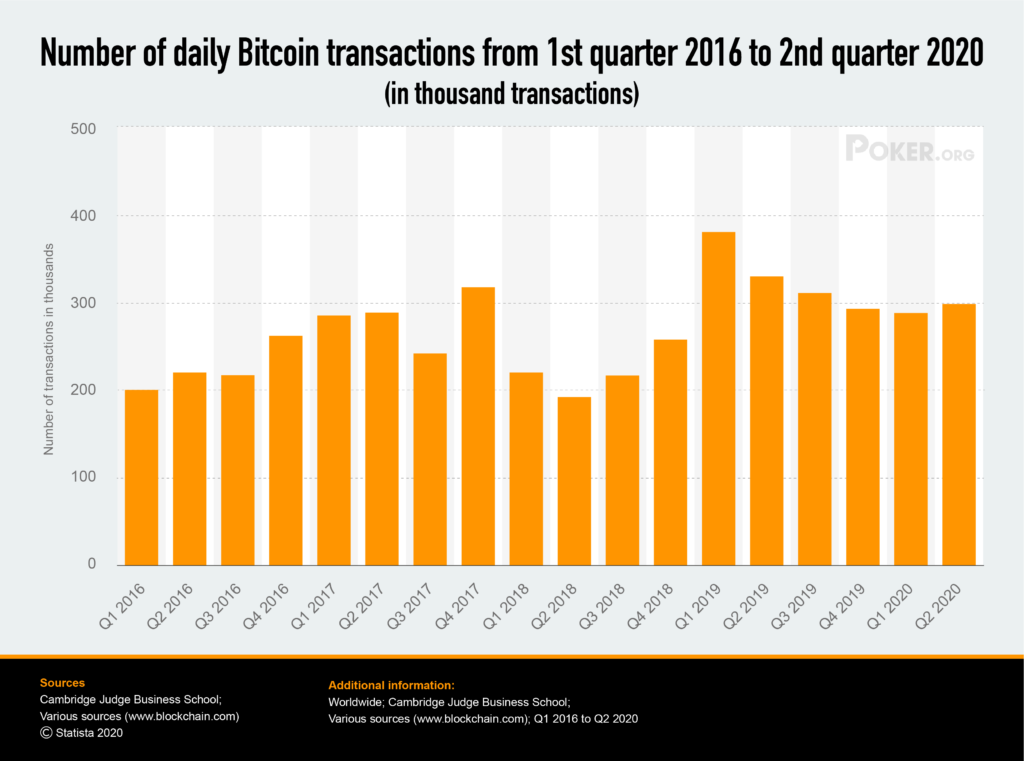 Though Bitcoin is the most well-known of cryptocurrencies, it’s not the most commonly-used. In fact, Ethereum saw more than twice the daily transactions in Q2 of 2020 than Bitcoin, with 866,440 transactions per day vs. Bitcoin’s 296,620. Other cryptocurrencies like Litecoin, DASH, and Monero trail by a distant margin. 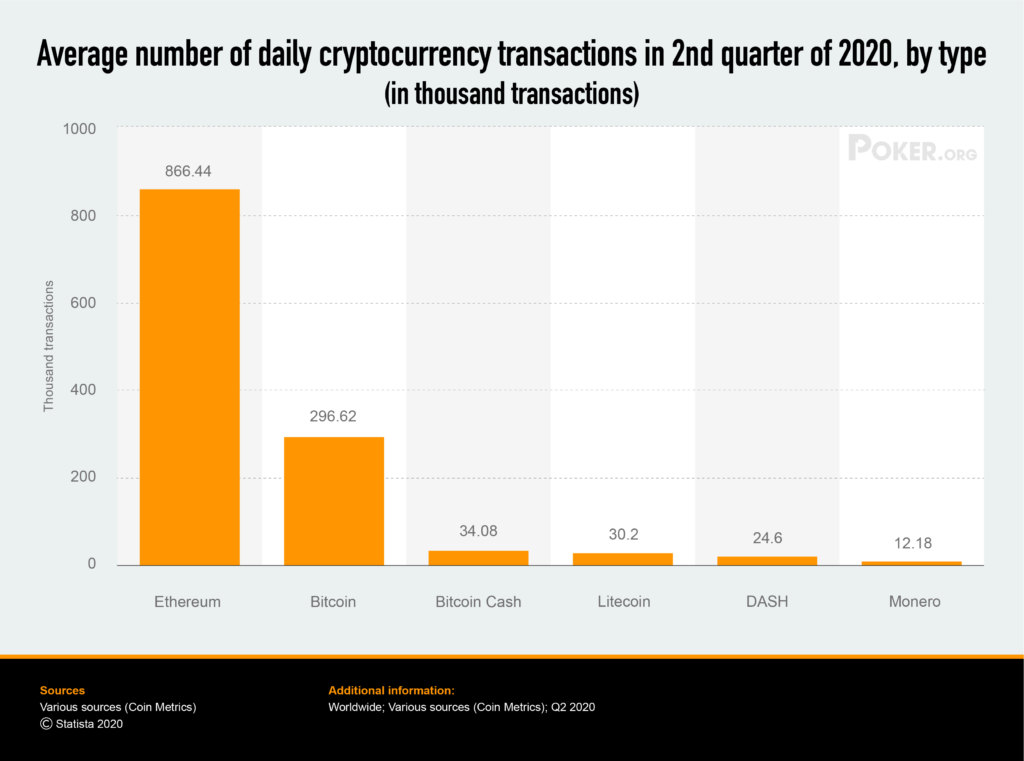 Where Can You Spend Cryptocurrency?

You may think cryptocurrency is strictly an investment. But you can actually spend it on an increasing grocery list of products and services. Some businesses have added Bitcoin acceptance in a clear bid to make a PR splash, but others use it as a good alternative to legal tender.

Microsoft accepts Bitcoin through their Xbox store. Overstock does too, and Starbucks has promised to take payments in the cryptocurrency soon when the Bakkt app goes live. Whole Foods, Gamestop, and Jamba Juice process Bitcoin payments through the Spedn app, and you can use it to buy IT hardware at NewEgg.

But shopper beware — spending cryptocurrencies like Bitcoin isn’t a smart move because of lost investment gains. For instance, Bitcoin’s price nearly tripled from March through June in 2019. Spending digital money on consumables right now is a bit like selling off a rare collectible to buy a pizza.

Some companies accept cryptocurrency because they sell associated products. For example, NewEgg carries an almost endless catalogue of Bitcoin mining hardware, and may have felt like they had to put their electronic money where their mouth is.

But worldwide payments processors such as PayPal, Visa, and Mastercard have announced a push for Bitcoin acceptance because cryptocurrency is more secure than any other form of legal tender. Mastercard has even launched a dedicated bitpay credit card. Square is another recent Bitcon-accepting convert.

Encrypted money is also fairly easy to accept. To start accepting cryptocurrencies, vendors just choose a payment processing provider and open a Bitcoin account. Then they tweak a few settings like native currency and how and when they’ll cash out. Mastercard’s bitpay even has a plug-and-play solution. AT&T, Burger King, and Twitch are just a few more of the top businesses accepting Bitcoin.

The heatmap below shows cryptocurrency accepting businesses across the U.S. Hotspots like San Francisco may owe their high activity to a concentration of crypto investors and a flood of crypto capital that drives the market. The top four crypto-accepting cities are all within the San Francisco Bay area. 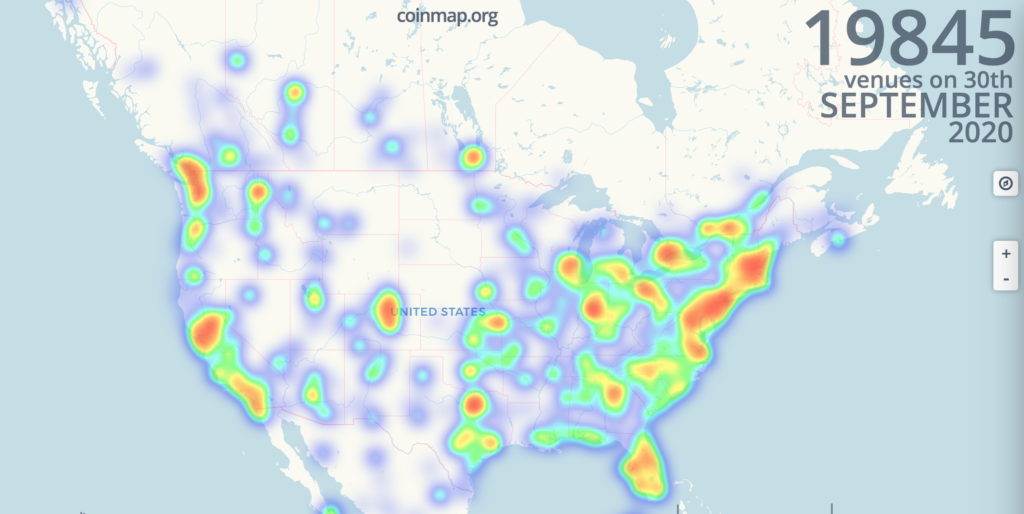 Top 20 Largest U.S. Cities and the Businesses That Accept Bitcoin

The short story on the top 20 largest cities with businesses that accept Bitcoin in the U.S. is that there aren’t 20. That’s according to a review of Yelp profiles of brick-and-mortar stores that advertise that they take Bitcoin. Adding data from national chains would bump these numbers up by several orders of magnitude.

The main types of physical small businesses in each state that accept Bitcoin as a means of payment are florists, restaurants, fashion retail, and game shops.

A growing list of businesses process Bitcoin payments, including Microsoft and Subway. Here’s a list of the top 10 businesses that accept cryptocurrency payments.

You can even buy a ticket to space with cryptocurrencies on Virgin Galactic. In fact, one of the Winklevoss twins (who famously sued Facebook founder Mark Zuckerberg in 2008) went to space with a Bitcoin-purchased ticket.

How Many Bitcoin ATMs Are in Your City?

Did you know you can buy Bitcoin cryptocurrency right at an ATM near you? Aside from buying the electronic money on sites like Americas Cardroom and Grand Poker, you can saunter down to the corner ATM and rack up a little digital investment. Some Bitcoin ATMs (but not all) also let you sell your existing Bitcoin for cash. One more way the ATMs work is by letting you put cash in and send it to a friend’s Bitcoin account or Bitcoin wallet.

There’s a surprisingly high number of Bitcoin ATMs in major cities around the U.S., including the New York area with over 500 machines, San Francisco with 172, and even far-flung Bangor, Maine with 2 Bitcoin machines.

A few surprises: New York City proper isn’t even in the top 20, and the cryptocurrency hub of San Francisco doesn’t make the top 10. By contrast, Atlanta, Georgia seems to be a hotbed of crypto-ATM placement, and the relatively small berg of Raleigh, North Carolina (population 469,000) puts the Big Apple to shame with 113 cryptocurrency ATMs.

Want to check for Bitcoin ATMs near you? See the full CoinATMRadar map.

Things You Didn’t Know You Can Buy With Bitcoin

If you’re in the market for a Lamborghini but you’re running short on cash, don’t worry. You can cover the $417,826 sticker price (with options) from your Bitcoin balance. (Only 72 Bitcoin.) And if you’re flying to Latvia any time soon, consider shelling out the cryptocurrency for your airBaltic flight.

Buy espresso, hemp oil soaps, and even Powerball tickets with the digital currency. You can even shell out for a Whopper with the magic money, and some cheese fries. That’s because not only does Burger King trade sandwiches for Bitcoin, but so does the famous Great Lost Bear in Portland, Maine.

And don’t worry if you eat too many cheeseburgers, because you can also get a Brazilian butt lift at the Big Apple’s bodySCULPT plastic surgery center. Does the damage run deeper than a few extra pounds? Never fear, because Crescent Tide Funeral services gives a 3% discount for Bitcoin payments.

You can also purchase guns, Rolex watches, clothes, and make donations to the U.S. Libertarian Party with Bitcoin. And of course you can buy in to poker games on sites around the world with cryptocurrency, since poker players are notorious early tech adopters.

Cryptocurrency remains a tempting investment for many, but will it move into the public domain as a viable everyday currency? Will you be buying lattes and cornflakes with it any time soon?

Yes, according to Damien Ducourty, Founder at blockchain training and development firm B9lab.

“Cryptocurrencies will become mainstream in at least two concrete ways,” Ducourty says. “However, the end user won’t need to know they’re using a cryptocurrency and it won’t matter that they don’t.” In the same way, few of us know how our computers or cars really work, yet we still use them.

“The first way we’ll use digital money like Bitcoin,” Ducourty says, “is as the background mechanism for transfers of value in everyday transactions.” Blockchain technology, in other words, will underpin the transactions we already make, creating an added but invisible layer of security.

The second way will work in place of current government-backed currencies like the U.S. dollar. “CDBC (central Bank Digital Currencies) have been floated almost since Satoshi wrote his white paper,” Ducourty adds. This is not a giant conceptual leap from the current system, but it may take central banks and governments some time to implement. “It takes a big budget investment that’s currently hard to justify.” Ducourty points out that it’s tougher to predict whether Bitcoin itself will see wider adoption as a payment method of choice for Jill and John Consumer.

“I do believe in the next 5 to 10 years everyday consumers will transact in cryptocurrency,” says Bright.

“Besides corporate Bitcoin investments, we’re seeing massive initiatives by companies like EY and Microsoft to build enterprise and consumer grade applications within the Ethereum blockchain ecosystem. Businesses are increasing their stakes in blockchain technology by building the on/off ramps for their clients and end users. It seems logical that as the technology becomes more developed and intuitive, it will reach a much higher level of adoption.”

In fact, cryptocurrency organizations like Reserve are already developing Venmo-style payment apps to bring crypto spending into the mainstream.

Cryptocurrency is an exciting technology that lets users process transactions with a high degree of security. Based on blockchain ledger tech, it resists counterfeiting by keeping records of transactions in multiple locations. Traditionally little more than an investment, cryptocurrencies like Bitcoin are swiftly catching on as everyday payment methods. As daily transactions continue to grow, we can expect to see digital money move ever more into the forefront of our lives. 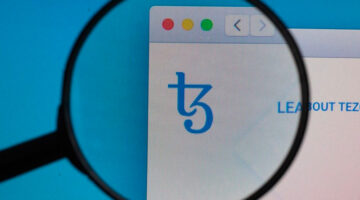