Series finale from the online festival crowns Main Event champion for a $636,478

The 2020 GGPoker Battle of Malta played to a finish Nov. 28, with the nine remaining players in the Main Event returning to determine a champion. Brazilian player ‘Eureka!!’ emerged victorious, taking home a $636,478 payday as the online festival came to a close.

‘Eureka!!’ took out runner-up finisher ‘HORN3T’ (2nd – $436,111) in the heads-up battle for the championship. The battle between the final two players lasted just over five minutes, with ‘Eureka!!’ going into that match with more than a four-to-one chip lead.

‘Eureka!!’ (72 big blinds) used that heads-up chip advantage over ‘HORN3T’ (17 big blinds) to dominate two-handed play. ‘HORN3T’ couldn’t manage to chip away at the lead, which grew hand by hand until the final pot of the tournament.

That hand began with ‘HORN3T’ pushing the remaining 11 big blind stack from the button preflop, and getting a call from ‘Eureka!!’. The A♣4♣ of ‘HORN3T’ was up against it going to the runout, as ‘Eureka!!’ turned over J♦J♥.

The final board gave no help to the short-stacked ‘HORN3T’ as 9♥J♣9♦6♣Q♠ hit the board. The flopped full house for ‘Eureka!!’ left ‘HORN3T’ nearly drawing dead, and the turn clinched the championship for ‘Eureka!!’. 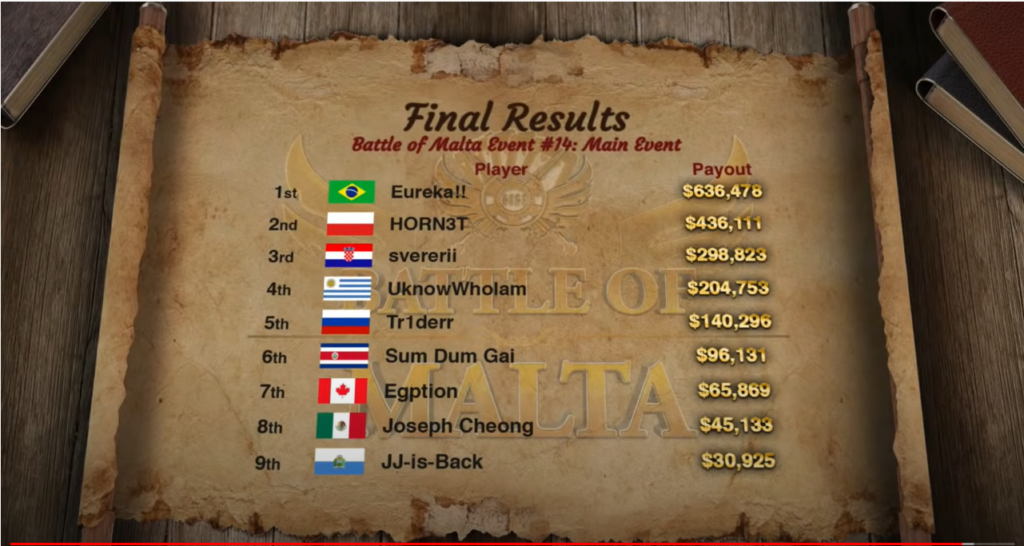 Each of the top five finishers in the Battle of Malta Main Event turned a $550 buy-in into a six-figure payday. Heads-up play was set up when ‘svereii’ (3rd – $298,823) bowed out in third place. The tournament run for ‘svereii’ ended when ‘Eureka!!’ open-shoved from the small blind with A♣8♥ , and got a call from ‘svereii’ with K♦Q♥. Neither player improved as the board ran out, sending ‘svereii’ to the exit.

Other top finishers included ‘UknowWhoIam’ (4th – $204,753). The real name of this player is unknown, but the Main Event final table appearance added to a growing legend around the tournament crusher. The $204,753 payday brings the career GGPoker earnings of ‘UknowWhoIam’ to $6,493,841.

The $550 Battle of Malta Main Event, which guaranteed $3 million, saw a massive field of 8,789 entries register. That attendance pushed the prize pool to $4,592,252, far surpassing the guarantee. The tournament played down to the final table on Nov. 22 and broke for six days before the final nine returned to play out the championship.

The 2020 Battle of Malta ran as an all-online event for the first time ever this year. COVID-19 considerations forced the live festival to postpone, prompting tournament organizers and GGPoker to run the event online.