We reported last month that Google Trends data indicated interest in online poker was on the rise. But new data from August shows searches for “online poker” were significantly down compared to July.

The global health pandemic forced the closure of most poker rooms around the world in March. As such, many poker players turned to the internet to get some action. During the month of July, the WSOP hosted an Online Bracelet Series on WSOP.com. Although it was only available in the US, it brought thousands of players to New Jersey and Nevada to compete online.

In July, Google search engine users expressed great interest in playing cards on the internet. Ever since Black Friday in April 2011, searches on Google for the phrase, “online poker,” have been down considerably. But two months ago, according to Google Trends, interest in online poker was nearly as high as it was during the latter days of the poker boom era. So, does that mean we’re heading for a second boom? Not so fast. 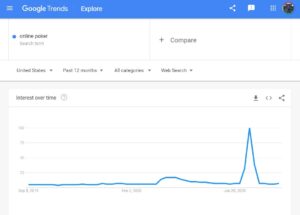 Website owners use Google Trends to determine how popular a niche is over time. The database doesn’t share details on specifically how many searches were made for a certain key-phrase. Instead, it reveals how popular that phrase or keyword is compared to previous months.

Take the search phrase, “online poker,” for example. Google received more searches for the phrase in June 2007 than any other month since 2004. What does this reveal? It shows that interest in online poker was at its highest during that time.

Online poker interest remained high through April 2011. And then Black Friday struck, forcing the top poker sites out of the US, leading to decreased popularity in the game. From May 2011 until January 2014, the graph indicates a steady decline before leveling out from February 2014 to March 2020.

After the coronavirus hit, interest shot back up as players, especially in the US, returned to online poker. But with the casinos around the world slowly beginning to reopen, interest in online poker was down significantly last month compared to July.

In July, Google received approximately 46% of the searches for “online poker” compared to its peak month of July 2007. That’s in line with where it was in the two years leading up to Black Friday. But last month, the key-phrase only generated 13% of searches compared to the peak month. That’s right about the same as it was in most months for about six years before COVID-19.

So, what does that tell us? The supposed online poker boom was over-hyped. The boom lasted just a few months because players were stuck at home with no local card room to visit. Now that the poker rooms are beginning to reopen all around the world, it’s back to normalcy for the online poker industry.