Television coverage of poker tournaments and cash games revolutionized the game. ESPN’s introduction of the hole card camera made poker a mainstream spectator sport for the first time in the early 2000s.

The COVID-19 pandemic has forced many scheduled live tournament festivals to move online. With that change, poker fans consumed poker through streaming coverage of online events far more in 2020 than any other year past.

Poker.org interviewed Kelly in the midst of the 2020 surge in streaming poker coverage, with Kelly weighing in on how the pandemic has affected the way the public sees the game.

Poker.org: How do you think online tournament coverage on Twitch/other streaming formats stacks up against live tournament TV coverage?

Justin Kelly: Online coverage is a very different animal when compared to live coverage. Generally speaking, when you’re watching live coverage, it is normally on a delay with hole cards up or edited down in post-production to cherry-pick big hands that unfold.

Most of the time when we’re broadcasting online tournament coverage it is normally not on a delay and the hole cards cannot be seen. Because of this, the commentary team generally gets to speculate on what hands or plays are being made, but unless it gets to showdown we are often left with a sense of wonder on players’ potential hand holdings.

When you’re not commentating on WPN events, do you watch streaming coverage of events like the GGPoker WSOP series?

If I’m not busy streaming a major event, you can almost always bet I’m busy watching it. It’s so great to see the poker community rally and cheer around the game they love on a Twitch stream. I saw examples of this consistently, almost nightly even, during the 2020 WSOP series on David Tuchman’s and Jeff Platt’s broadcasts. It was almost like a “virtual rail” at a live event with everyone cheering for the friends in the chat window.

WSOP, WPT, and other major live tours were forced to cancel some tournaments and reboot them as online events in 2020. How long do you think that trend will continue?

Unfortunately, there’s really no way to tell how long this will last. I believe the majority of getting back to a level of “live poker normalcy” is largely dependent on government restrictions and finding/implementing a COVID vaccine.

So far masks, shields, and limiting players per table in a live poker setting seem to be the new norm. As expected, not all players are on board with the changes, plus combined with the fear of traveling during COVID times makes for a pretty solid deterrent in large-field live poker tournaments.

🕷️🎯 The final table of our $5 Million GTD #VenomPKO is Wednesday, November 4th at 5pm ET. @Fattrain & @Michael_Loncar (hosts of the ACR Show) will be the commentators on our Twitch Stream. https://t.co/nnBWSRGq9T#VenomTournament #ACR #Poker #Venom #ProgressiveKnockout pic.twitter.com/mKiLNW4AYq

Do you think online poker as a streamed spectator game continues to be popular even after live poker tournaments come back? Specifically streaming coverage of major tournaments.

Absolutely! As much as we all love live poker, you can’t argue that online tournaments draw huge fields and prize pools that oftentimes are simply impossible in a live tournament setting due to size/space/manpower etc.

At the end of the day, more poker is better and there is room for both live and online. I believe we will see a healthy combination of online broadcasts as well as professionally produced coverage pretty consistently over the coming years.

How do you think streaming coverage of online poker tournaments will evolve in the next five years?

Since online poker will have a record of every hand played by every player throughout the entirety of the tournament, this opens the doors for all sorts of fun statistics that simply cannot be tracked in a live tournament. I would imagine cool things like chip stacks graphs, toughest beats, biggest comebacks etc. to be standard statistics that can be brought up on the screen to enhance the viewing experience. 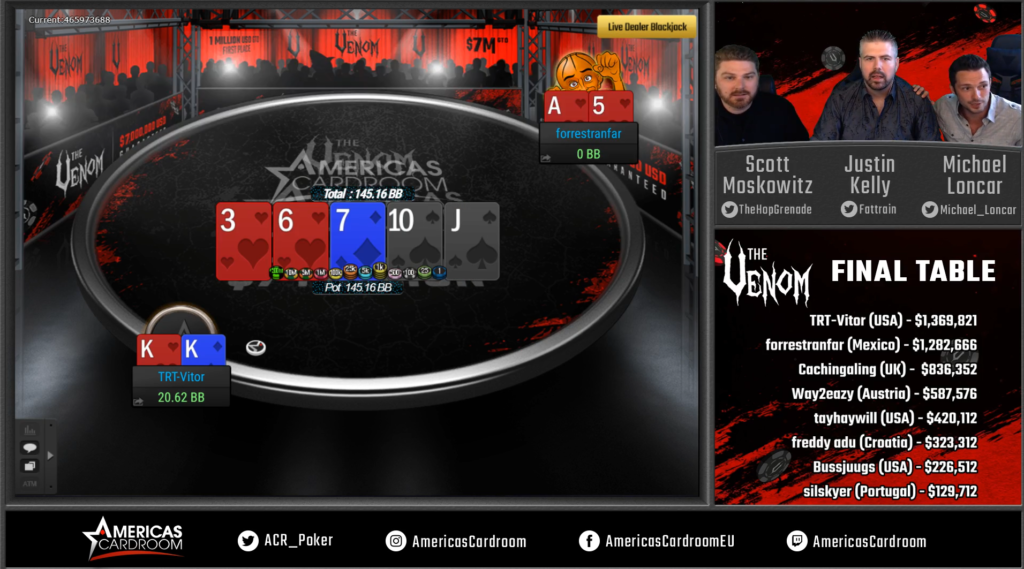 How will content created by Twitch streamers evolve in the next five years?

Online streaming in general seems to be evolving very quickly. Streamers are consistently developing new and innovative ways to engage with their audience via Chat, interactive games, and more.

For example, on the weekly show I host for America’s Cardroom I have worked with someone in developing a “BombPot” platform where it picks 8 random viewers, deals them all cards, and then runs out a board for a prize.

People absolutely love it! For me, watching broadcasts online are far more interactive for the viewer to participate and have open discussion vs. just watching something on ESPN and kicking back on the couch.