Belarusian high-stakes fixture comes away with a $1,062,730 payday

One of the biggest online high roller tournaments of the year came down to two of the top 13 players on the all-time live tournament money list.

Mikita Badziakouski and Jason Koon bypassed a potential heads-up match, however, as Badziakouski came away with the win per the terms of a deal. The two all-time poker greats came to the agreement as the final two players remaining in the World Poker Tour World Online Championships Event #10: $25,500 High Roller Championship.

Badziakouski and Koon face off frequently as familiar foes on the high-stakes tournament scene, but the $25,500 High Roller didn’t end in a duel between the two world-class players. Badziakouski took home $1,062,730 with the win, while Koon came away with $810,869.

Badziakouski enters the final table with the chip lead, exits with victory

The final table, streamed on the partypoker Twitch channel, began with Badziakouski in the chip lead with a 158 big blind stack. The seven-handed final table started as a deep-stacked affair all around however, as Barkov, Kolonias, and Koon all entered the day with upward of 100 big blinds.

Imsirovic, the shortest stack heading into the final day of the tournament, was the first to hit the virtual rail. Imsirovic got the losing end of an ace-king versus pocket jacks coin flip against Rezeai, ending his Event #12 run.

With so many big blinds in play to start the day, the final table predictably played out long, with seven hours of play needed to decide the champion. Barkov and Kolonias were the next two to go, followed by fourth-place finisher Demirjian. 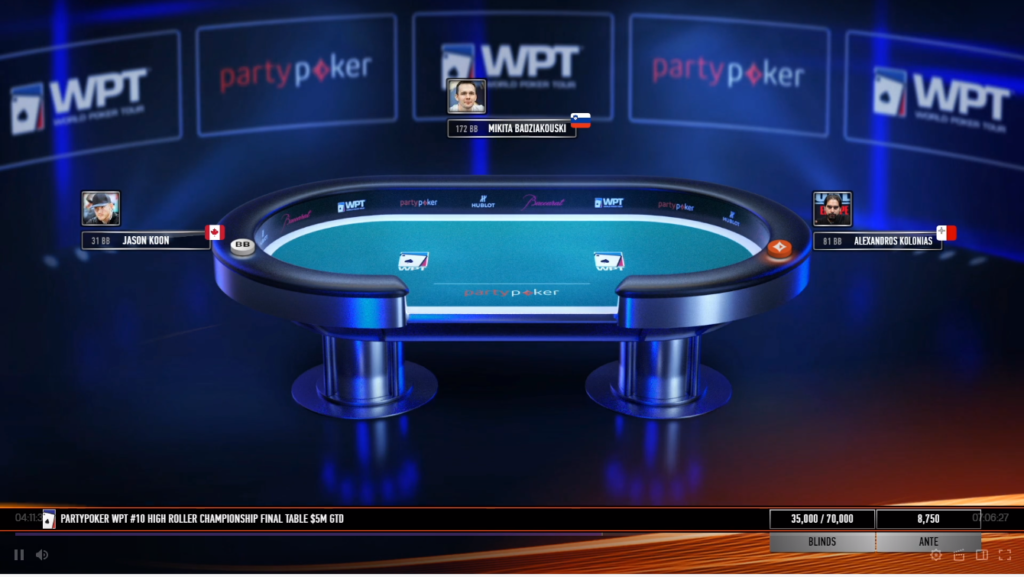 Badziakouski did the duty of eliminating Demirjian, leaving the Belarusian tournament crusher with more than 60 percent of the chips in play. Koon went into the final three as the short stack, with 31 big blinds.

Badziakouski stayed in the lead throughout three-handed play, while Koon and Kolonias battled it out trying to make a dent in Badziakouski’s advantage. Koon eventually won that battle, as Kolonias’ run ended at the hands of Badziakouski.

Koon and Badziakouski add to their legacies

Instead of playing out the heads-up match, however, Koon and Badziakouski agreed to a deal. Koon took home an added $31,000 to bring his runner-up payout up to $810,869.

The WPTWOC events don’t count toward live earnings in the Hendon Mob database, but taking a look at the live tournament resumes of both Koon and Badziakouski reveals two of poker’s most successful players.

Badziakouski sits at No. 13 on the all-time earnings list with nearly $28.5 million in lifetime cashes. Koon is No. 9 on the list, with more than $31 million in career earnings.