The Los Angeles Dodgers, one of the most talented teams in baseball history, won the 2020 World Series in a shortened season due to COVID-19. Although the champs were stacked with run producers, many of the best value players — those who produced at a level above their pay grade — played on other teams.

Poker.org compiled a list of the best value offensive players of the 2020 season. Our rankings are based on player salaries relative to runs created. So, hitters that gave their teams the most bang for the buck aren’t necessarily the best overall performers. In some cases, a great shortstop or outfielder gets short shrift in the data because of a weak batting average for the season. But this list will give you an idea of just how valuable a player is in terms of runs created relative to salary earned.

Due to the shortened season, the stats are a bit skewed this year, thanks to smaller sample sizes than normal. Our value stats — dollars per run created — are based on a simple equation: 2020 salary/runs created (RC). Only players with at least 100 plate appearances were considered. 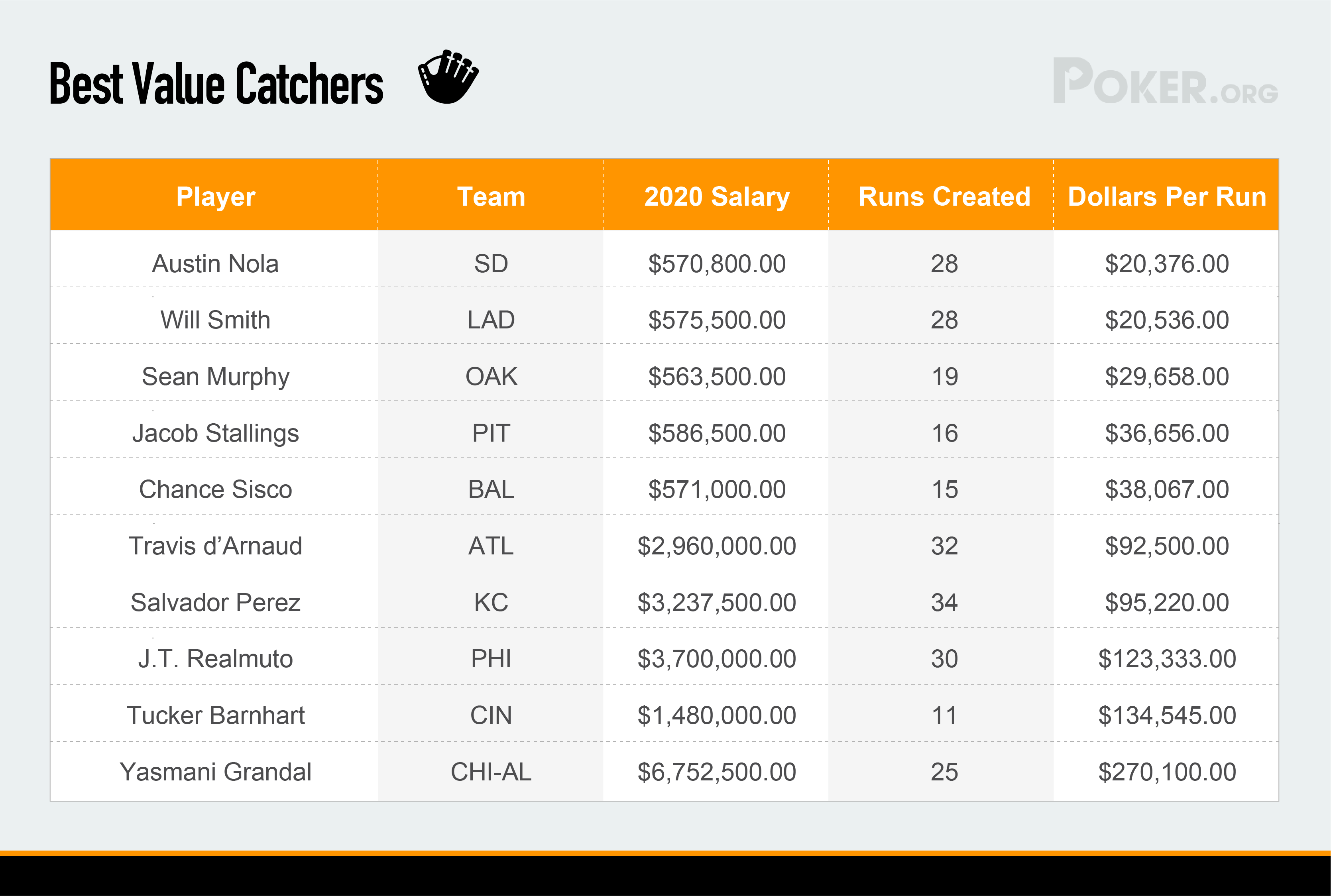 You’ll notice a pattern here. The best value players are those with low contracts. Players like Austin Nola are still in their initial big league contracts, which is why they’re paid far less than others on the list. The young Padres catcher was a key late-season acquisition from Seattle, shoring up a spot of need for playoff-bound San Diego. Although Nola gave his team the best bang for the buck, Salvador Perez, who batted .333 with 11 homers in 156 plate appearances for Kansas City, had the best overall production of any catcher.

Will Smith has been an absolute steal for the world champion Dodgers. Although he didn’t catch full-time (Austin Barnes also had 104 plate appearances), he gave Los Angeles eight homers and did so on a rookie contract. Smith was often overlooked in that lineup because of stars like Mookie Betts and Corey Seager. But he’s quietly produced 23 homers in just 333 career plate appearances, which is almost unheard of from a young catcher (25 years old). 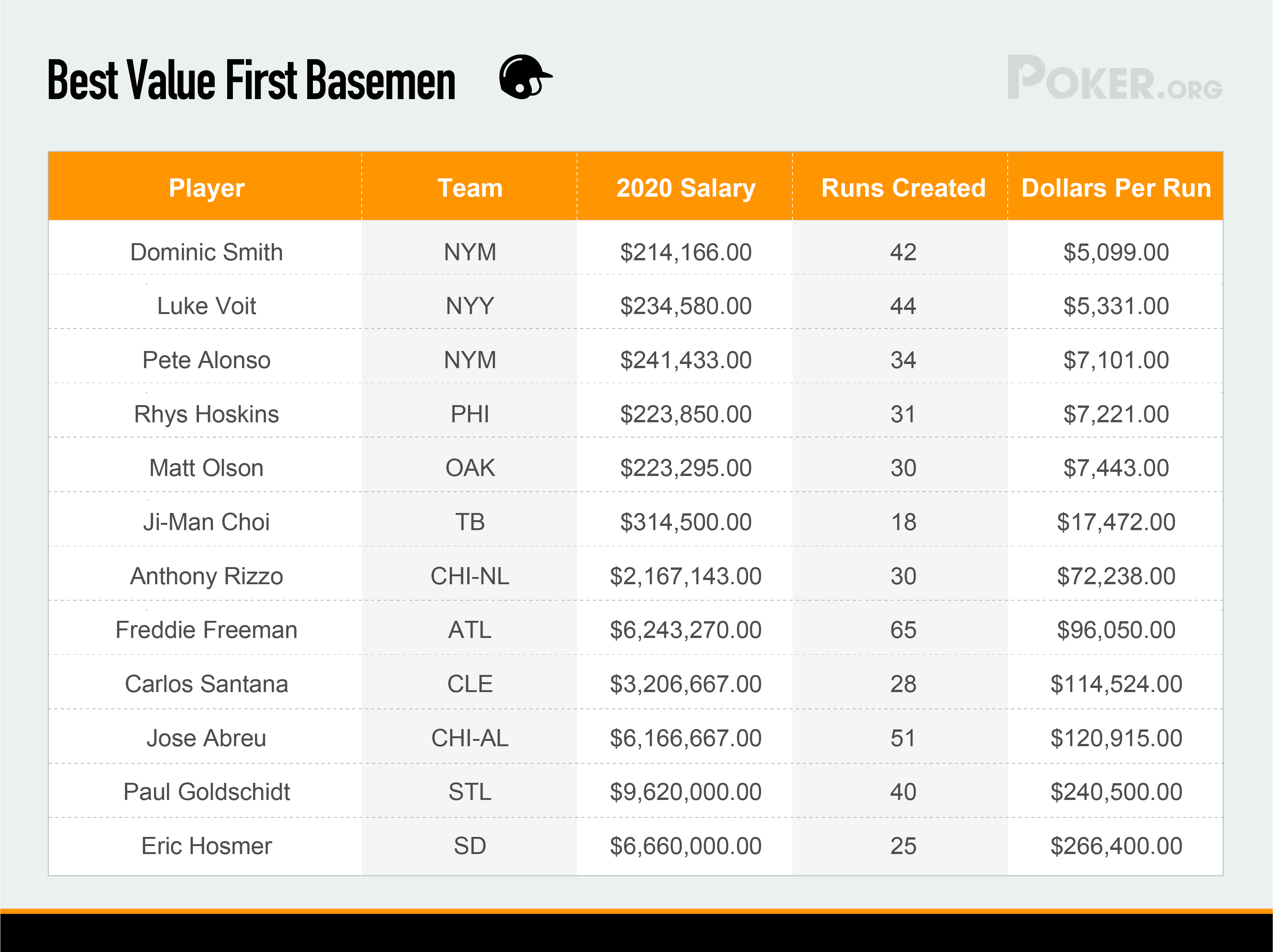 First base is one of the top run-producing positions in baseball. Atlanta Braves star Freddie Freeman was tied with Marcell Ozuna, with 65 runs created. That’s the most in all of baseball this past year. He had 73 hits, 13 homers, and a 1.102 OPS in just 60 games.

But it was Dominic Smith of the Mets who turned out the lowest salary per run created at this position. Smith, 25, had an impressive season in New York, slugging 10 dingers and batting .316 in 50 games. He’s one of baseball’s top rising stars. But he has yet to prove he can perform at a high-level over a full 162-game season. Although Smith also crushed it last year, he only played 89 games in 2019, many of which he came off the bench for. With that said, at near league-minimum salary, the Mets have gotten full value out of his initial contract.

The same can be said of 29-year-old Luke Voit, whom Yankees fans have been waiting to bust out for years. In three seasons entering 2020, he played just 227 games due to injuries. This past year, albeit in a shortened season, he finally stayed and gave the Bronx Bombers the production they’ve been waiting for, ever since acquiring him from St. Louis in 2018 (.948 OPS and a league-leading 22 home runs). 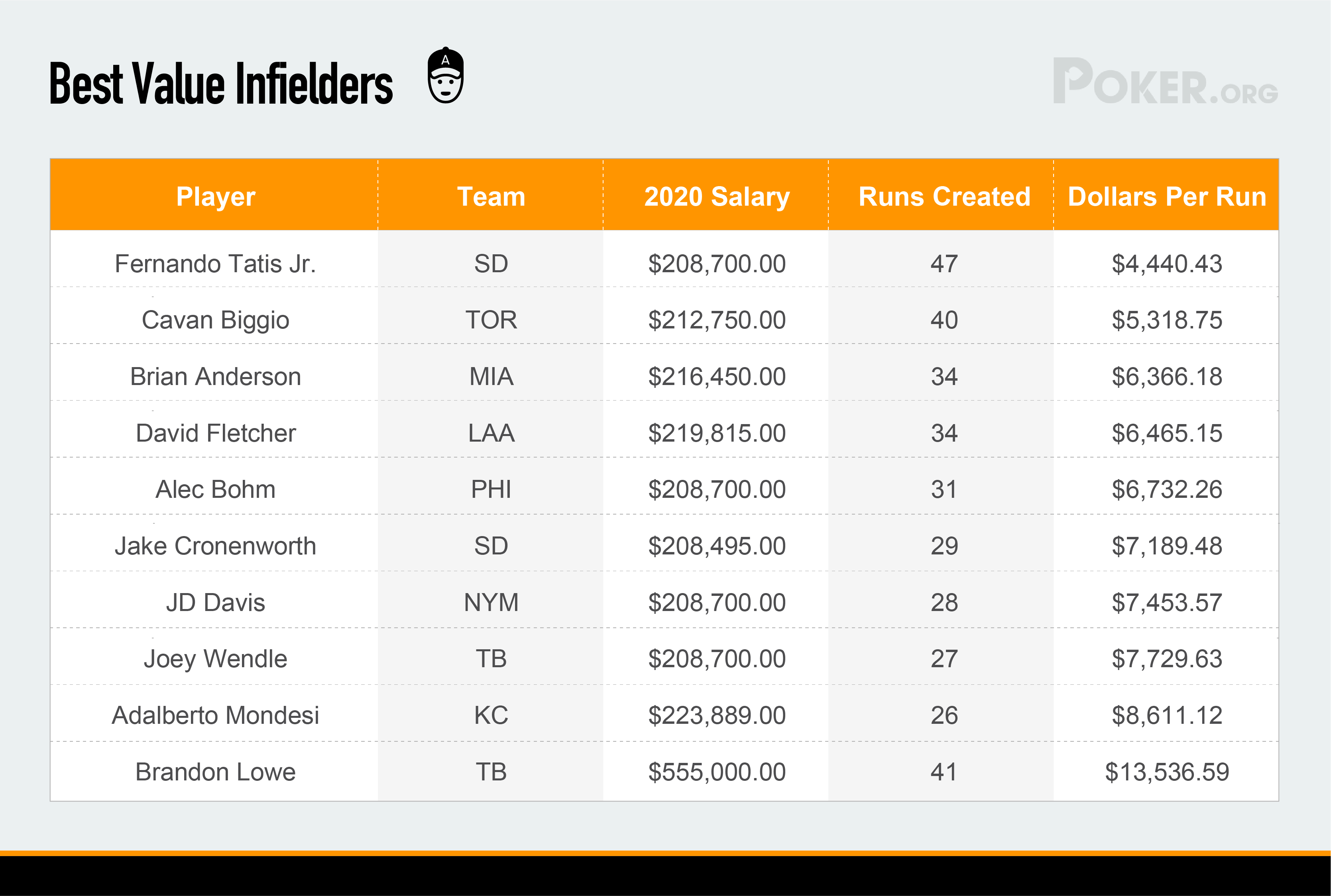 Fernando Tatis Jr., the son of former big leaguer Fernando Tatis, is one of the game’s brightest young stars and most electric performers. The 21-year-old slugger hit 30 extra-base hits (17 homers) in 59 games, and he did so on one of the lowest salaries in baseball. Cavan Biggio who, like Tatis, is the son of a former baseball star (Craig Biggio), had an outstanding second season in the bigs with a .375 on-base percentage and .807 OPS.

David Fletcher of the Los Angeles Angels was perhaps the most surprising infielder in the game. The undersized middle infielder hit .316 with 66 hits in 49 games, proving that you don’t have to hit home runs to provide value to a team. Sabermetricians and new-age scouts don’t love “Fletch” as he is more of an old-school type of player (minimal power and doesn’t hit solid line drives).

But all he does is produce and, most importantly, get on base in front of the middle of that talented Angeles lineup (Mike Trout, Anthony Rendon). Fletcher was considered a “meh” prospect when he came up in 2018 due to his lack of power. Who needs power when you’re producing runs in other ways, and doing so on a cheap contract, which the Angels need giving the huge contracts they’re paying to Trout, Rendon, and Albert Pujols. 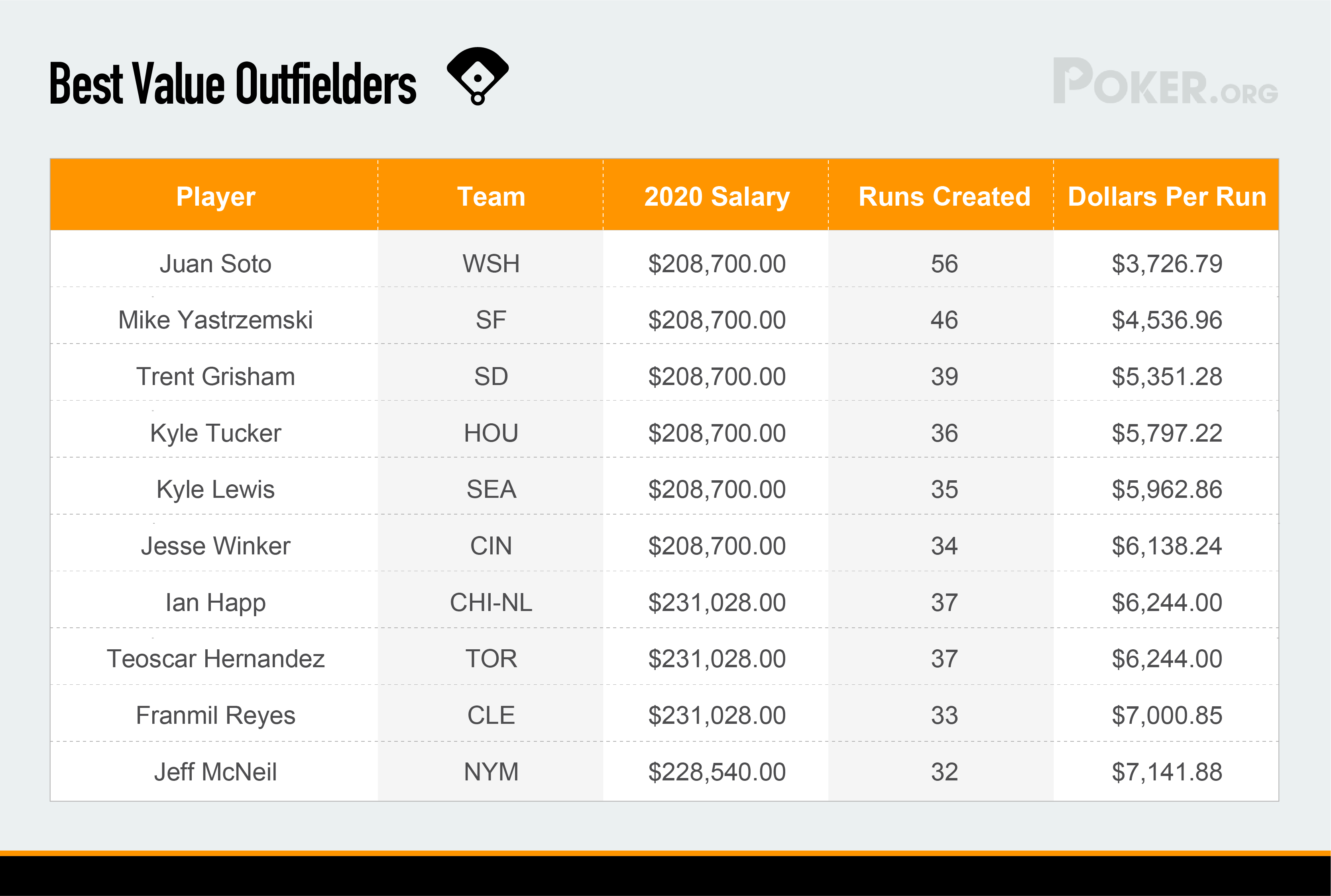 The main takeaway from these lists is that they show a small market team can win if they spend wisely, and if they effectively develop prospects. Larger market teams that can afford to pay $30 million-per-year contracts to superstars like Mike Trout don’t have to worry about getting the best bang for their buck.

But teams like Washington won a World Series title (2019) thanks in large part to Juan Soto, who just might be the best young star in baseball history. Soto, given his tiny contract and high run production, will enter the 2021 season at just age 23, and he’s already produced 69 homers, 328 hits, and a .972 OPS. He’s producing at an MVP level at a young age on a league-minimum contract. The Nats had better enjoy it while it lasts because when he’s arbitration-eligible in 2022, he’ll get paid, and then when he becomes a free agent in 2025, assuming he continues on this path, he’s looking at potentially a record-breaking deal.

Soto isn’t the only great young outfielder in the game producing well above their pay grade. Mike Yastrzemski, the nephew of baseball icon Carl Yastrzemski, followed up his surprisingly great 2019 rookie season with an even better performance in 2020 (10 homers, .968 OPS) for the San Francisco Giants.

Ian Happ was one of the few bright spots in the Cubs disappointing lineup this past year, and it came at a time when the outfielder desperately needed it. The once major prospect for the Cubs in 2017 struggled with consistency his first few years in the bigs, which kept him out of the lineup on many days. But he played in 57 of 60 games in 2020 and slugged 12 dingers with an .866 OPS. He’s arbitration-eligible this offseason and likely earned himself some extra money due to his strong performance this past year. 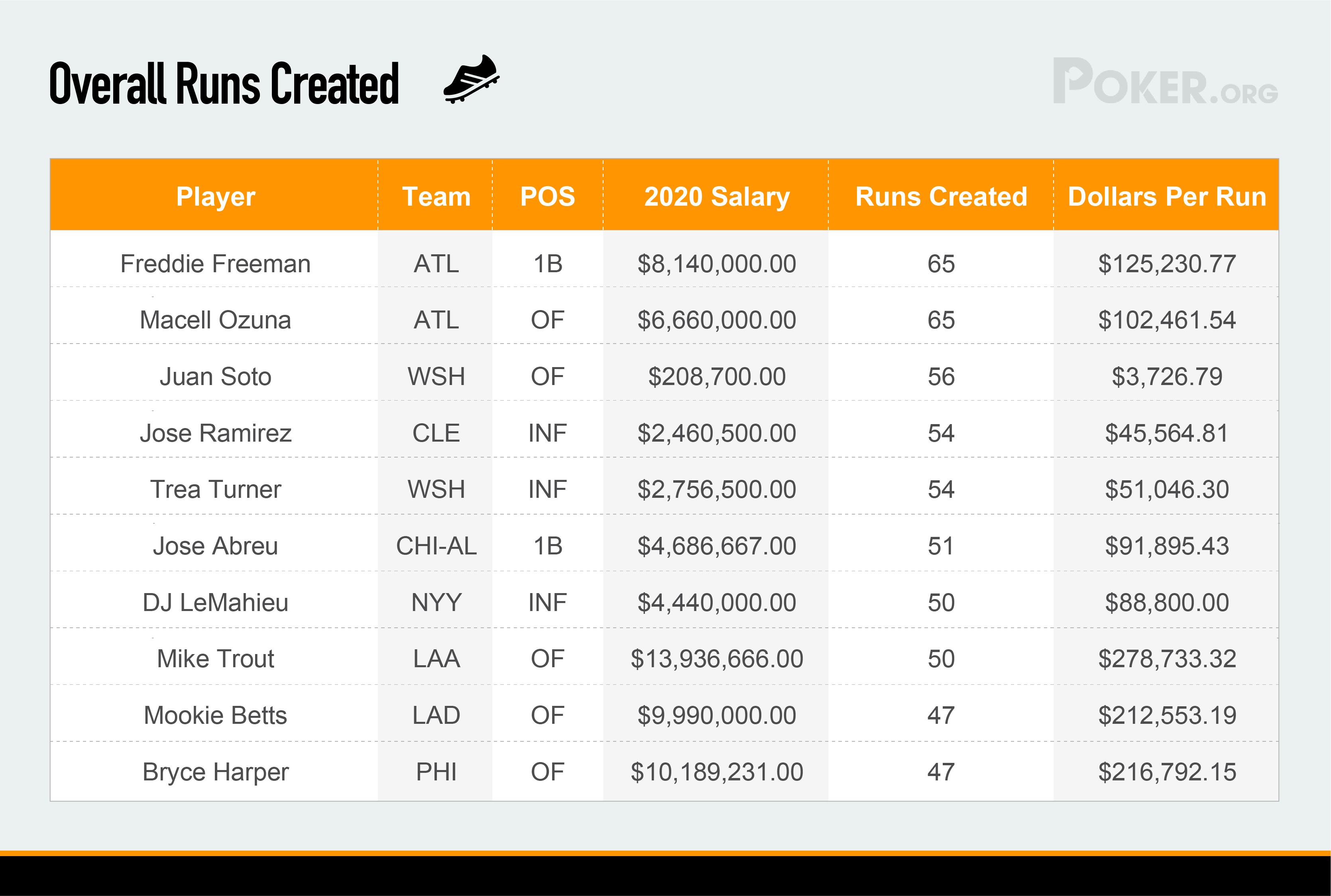 The above list is a chart of the best offensive players in the game, regardless of salary or bang for the buck. As you’ll notice, most of them play on teams in larger markets (i.e. New York, Los Angeles) because the wealthier teams are the ones who can afford to pay them those lofty salaries.

Small market franchises such as Kansas City and Pittsburgh can’t ever afford to keep around these types of players for long. So, the way they can build successful teams is by stocking up on players who make the “best value” lists above. Of course, it doesn’t help when a high-value player gets injured or suspended.

Deep pockets are a huge advantage in baseball, but they don’t guarantee success. Take the Angels for example. They’re paying Trout, Rendon, and Pujols a combined $85 million per year but haven’t made the playoffs since 2014. On the other hand, their cross-town rival, the Dodgers, make the playoffs annually with a massive payroll full of superstars like Mookie Betts.

Teams that have money to burn are a bit like a luckbox poker player. You still have to know how to play your cards properly, but having that luck on your side sure does help.

When pro teams improve, that’s better for bettors. See how the NFL’s most improved teams could interest gamblers.

‘The Good, The Bad, and the Hellmuth’ – Phil touts his new NFL tout shows

Is Phil Hellmuth as good at picking NFL season totals as he says he is?