PokerStars takes away the option to disable the Aurora graphics engine

PokerStars introduced a new graphics engine in spring 2019, but for the past 18 months, players on the world’s biggest online poker site could choose whether to opt-in to the new user interface or continue to use the classic PokerStars setup.

That option to opt-out is now gone however, and some players aren’t happy that they now have to play through the Aurora setup.

A group of players on the TwoPlusTwo forums voiced negative opinions about the Aurora graphics package in the “PokerStars Software Improvement Thread,” with a second thread titled “Aurora on PokerStars” also emerging Thursday. Several players contend that the Aurora graphics engine causes a number of issues with the PokerStars user experience.

Some of those issues, according to players posting in the TwoPlusTwo threads, include overall slow performance, lagging, freezing, inability to allow effective multi-tabling, and crashing.

User ‘hawaiisteve’ posted Wednesday that the PokerStars client still offered the option to opt-out of using the Aurora engine, but amended that with a subsequent post Thursday.

“Spoke too soon… logged out for lunch and logged back in… now I can only use aurora… worse yet first hand I played, tables faded white and it froze up!!!” wrote ‘hawaiisteve’ in the second post.

“Edit: tried 3 times. Each time table fades white and goes unresponsive after a few hands… I get a windows popup saying “Pokerstars Client not responding” and I have to close it,” continues the post. “Man this sucks. Been sticking it out thru all the crappy changes in the rewards and the piss poor customer service because the games are still soft and good but I think this is the last straw.. time to bail out”

Several other posts on TwoPlusTwo echo similar sentiments, as the majority of players voicing an opinion on the matter aren’t happy.

PokerStars 500NL Zoom regular and Upswing Poker coach Fried Meulders expressed his disappointment with the decision to disable the opt-out option for the Aurora engine.

For a lot of players it's not about whether Aurora is buggy or not.

It's about that you *had* a good UI that worked. I have been playing on Stars for 8+ years in Hyper Simple.

Even after a 90% cut in player rewards, players like me stuck with Stars. https://t.co/jgm25OkbqV

“For a lot of players, it’s not about whether Aurora is buggy or not. It’s about that you *had* a good UI that worked,” Meulders tweeted Friday. “I have been playing on Stars for 8+ years in Hyper Simple. Even after a 90% cut in player rewards, players like me stuck with Stars.”

Meulders goes on to write that the consistency of the pre-Aurora PokerStars platform was one of his main incentives to make the site his go-to option. 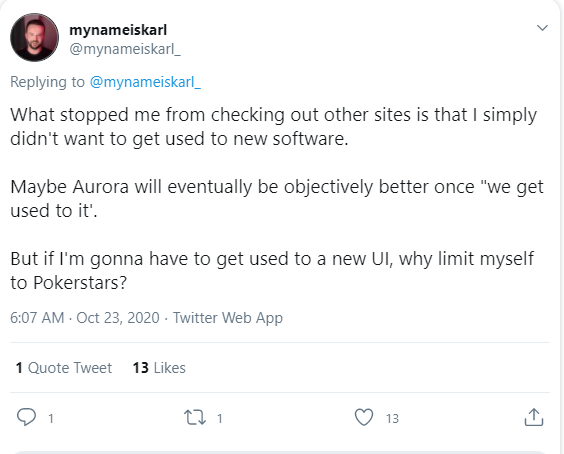 “What stopped me from checking out other sites is that I simply didn’t want to get used to new software,” Meulders wrote. “Maybe Aurora will eventually be objectively better once “we get used to it’. But if I’m gonna have to get used to a new UI, why limit myself to Pokerstars?”

PokerStars explained the decision to disable the Aurora opt-out feature in a three-part tweet posted Friday. Meulders’ comments were in response to that thread, in which the PokerStars Support Twitter handle explains the change.

This graphics engine opens up a whole new realm of possibilities for us and our community, but as poker players ourselves, we understand that it can take time to adjust. We take all feedback into consideration, and we can only promise better as it evolves. (2/3)

“Aurora is our default graphics engine and the option to turn it off has been removed,” states the first part of the tweet. “Rolling out our new graphics engine to our community has been a two-way process. We’ve been listening to all feedback, escalating issues, and fixing them on every iteration.”

“This graphics engine opens up a whole new realm of possibilities for us and our community, but as poker players ourselves, we understand that it can take time to adjust,” the thread continues. “We take all feedback into consideration, and we can only promise better as it evolves.”

“For now, if you’re experiencing issues please check that your graphics cards drivers are up to date. You might also want to try the Carbon table theme as this has been designed to consume less resources,” reads the third and final part of the tweet.