The U.S. is looking to increase federal spending for artificial intelligence jobs massively since AI is considered a vital industry for the future. The U.S. 2021 budget puts AI job spending at $1.49 billion. An independent think tank calls for an increase to $25B. But what are the best AI careers and where will the highest-salary careers emerge?

What Are AI Jobs? 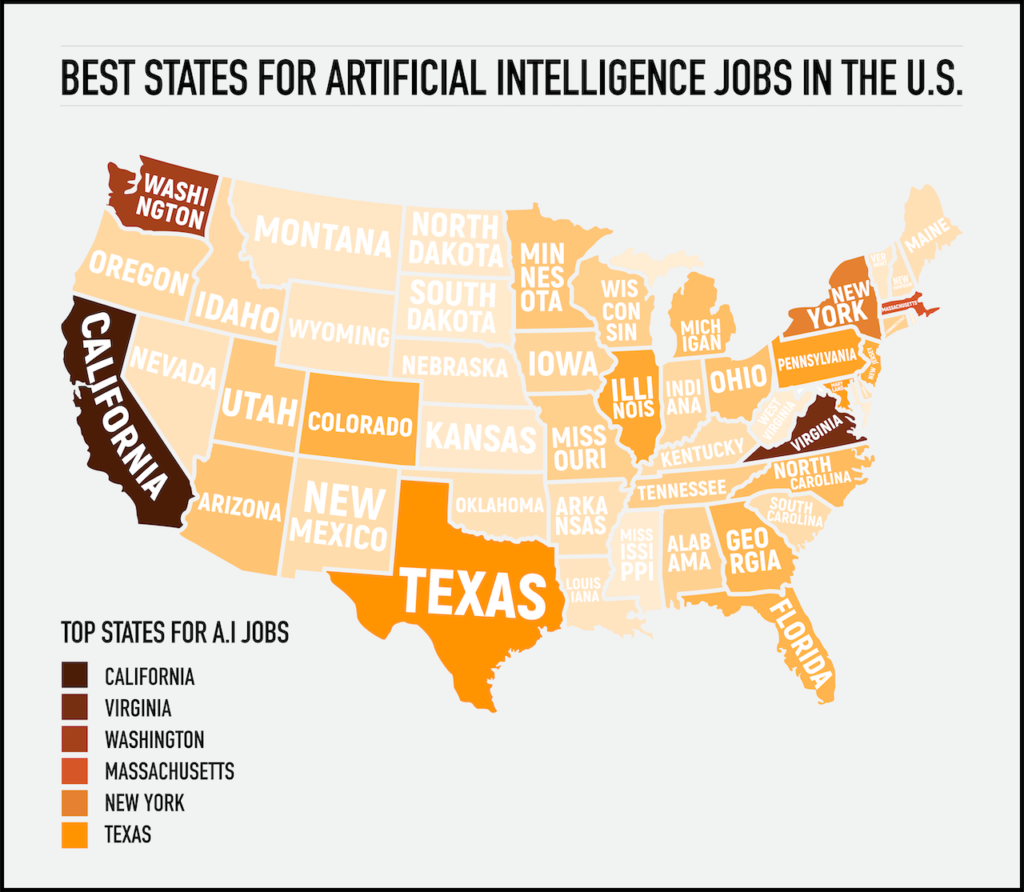 A 2020 Poker.org survey of Indeed.com data shows the most and highest-paying AI jobs will cluster in states with high-population cities like California, New York, and Texas. Big tech companies like Amazon, Google, Facebook, and Apple are filling AI developer jobs now, as are car companies like Ford and Tesla and the U.S. government.

Here are the top states for artificial intelligence jobs:

Why those states? Because they’re the U.S. states with a wide range of tech companies, robust educational programs for AI career preparation, and vigorous government investment in these new jobs. For instance, California is home to Apple, Intuit, Cisco Systems, and dozens of other tech giants.

According to a search for AI jobs on the top job search sites, the above are the top big companies hiring for AI jobs. But be warned that big companies draw the most job-search competition, while careers at small firms outnumber job openings at the big few and tend to stay under the job-search radar. 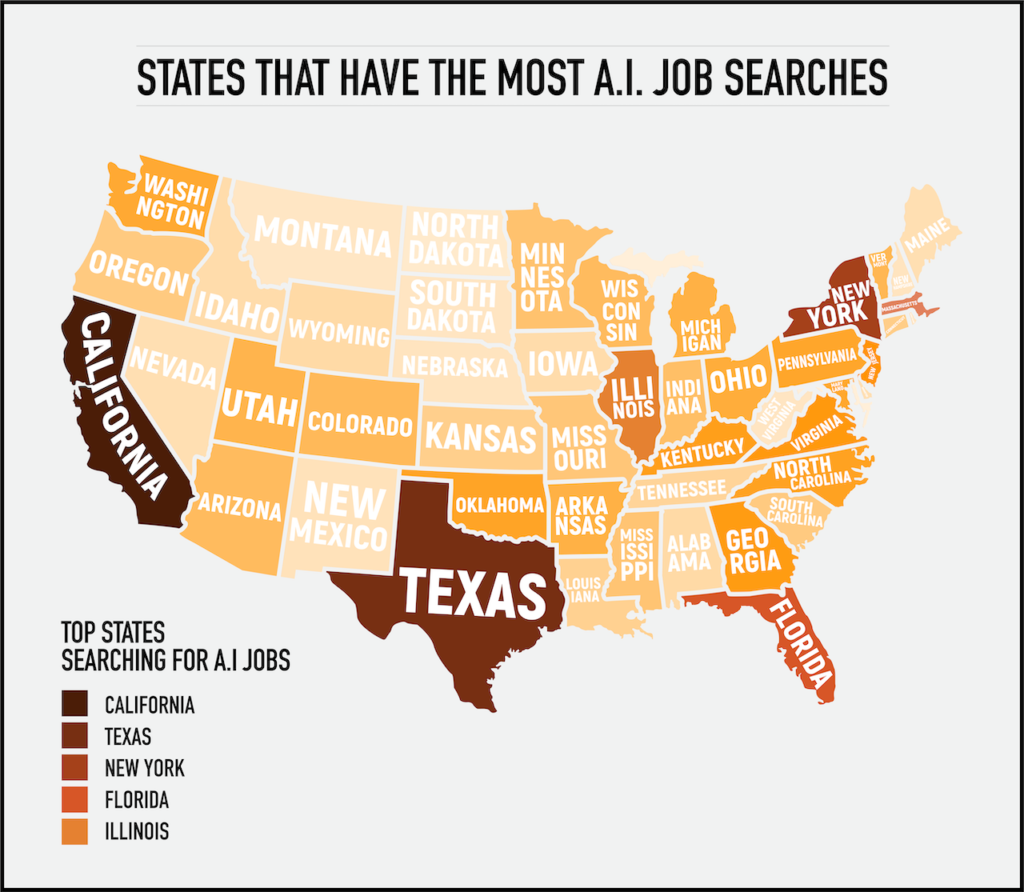 The shaded states in the map above get the most searches for AI jobs. That’s based on Google Trends data. Google Trends is an online tool that shows search popularity for different terms. We used it to analyze the states where people search the most often for the term, AI Jobs.

We also used keyword research tools to get a clear idea of how many times people in each state searched for that term. The upshot is a map that shows rising interest in AI careers by state.

Notice that California, Texas, and New York are in the list of states with the most AI scientist jobs and other AI positions and the most growing interest in those jobs. That makes sense, but what’s not as intuitive is why there’s so much interest in AI work in Florida and Illinois. Florida has only 180 AI job openings and Illinois has 256.

However, both states have wide offerings of strong computer science programs. And both state economies are firmly grounded in big business and tech, with firms like Boeing, Paylocity, Publix, and Carnival, to name a few.

A Closer Look at the Top States

The U.S. states with the most AI jobs tend to have robust tech, healthcare, or government sectors. They have a dense concentration of tech and engineering schools, and ample government funding to spend on artificial intelligence careers projects.

Important: The data below comes from Indeed.com, but doesn’t represent the sum total of all AI openings in these states. Additional positions may be listed on company websites, LinkedIn, Monster.com, or Google for Jobs, but not on Indeed. However, the job counts below give a good relative picture of how the state job markets compare.

California – the leader, with a twist

California leads the nation with nearly twice the number of AI jobs as any other state. The Golden state boasts 351 entry-level AI jobs and 148 remote (work-from-home) jobs. Not surprisingly, 577 people per month in California perform a Google search for AI career terms, making its residents the most interested in these jobs.

The state is the world’s fifth-largest economy, beating the United Kingdom by a narrow margin. Its economy is built on services, finance, insurance, real estate, trade, and manufacturing. Technology spans across many of those economic areas, with the most jobs in San Francisco, the Central Valley, and Southern California.

The problem? A population of almost 40 million and a much higher number of tech workers makes it harder to get hired into one of the state’s copious AI careers.

Virginia – easiest to find a job

Virginia’s breakdown of high-paying AI and machine learning jobs vs mid-range and entry-level carves a similar curve to California’s. With fewer overall jobs, there’s less opportunity to earn mid-six-figures in the AI field. However, with a much smaller population (8 million vs California’s 40 million) the odds of landing a high-end job on Indeed in AI are significantly higher.

In fact, per capita, the chances of getting hired for any AI programming jobs or other AI openings in Virginia nearly double those in California, despite the Golden State’s massive job count and job growth. Further, Virginia only sees about ¼ of California’s ample search traffic for the jobs, suggesting that the competition in the Old Dominion may be relatively slight.

Given its smaller population than Virginia, Washington State has a significantly lower count of AI jobs per capita. That may surprise some, given the Evergreen State’s high margin of 13% of its workforce holding jobs in tech. Businesses like Amazon, Microsoft, and T-Mobile call the state their home, which would seem to call for even more AI careers.

However, with only 101 monthly searches for those jobs, the prospects for tech-savvy job seekers in the state are excellent. And salary data in the state shows the pay for AI-related jobs like AI engineer jobs and AI research jobs is on par with other leading AI states. That makes Washington a key pick for job seekers.

Even more interesting is the dense concentration of these job openings in Seattle. With 70% of the new jobs packed into the Emerald City, the job search in the state won’t have to span the borders.

Massachusetts is home to 573 AI job openings, giving it a nearly identical profile to Washington State. It’s on-par population of just under 7 million and its 93 monthly searches suggest similar job search odds in the Bay State. The state remains committed to funding its blooming tech sector, with regular grants and proposed tax cuts for telecommuters.

The state’s tech-friendly attitude may be working, with big players like GE moving their global headquarters there to take advantage of the business-friendly climate and broad tech-talent pool. Far from a one-off, the move seems part of a trend, with Amazon, Fuze, Red Hat, VMware, and many others setting up shop in Boston too.

An anomaly, New York’s 19.4 million population makes it a weak spot on our list of states with the most AI jobs. By the numbers, the odds of landing artificial intelligence graduate jobs or senior AI positions in New York are 1 in 30,000. Meanwhile, Virginians get a 3x better chance than that at getting hired.

Backing up this data, New Yorkers search for AI work about twice as often as Virginians. Double the searches, less jobs, and a much higher population make the Empire State a slightly less attractive AI job market than it at first appears.

Texas comes in at a distant last place on this list of the top six states for artificial intelligence analyst jobs and other AI openings in the U.S. Not only does it lag behind the others in terms of real job openings, but when we look at the percentages, we find the Lone Star State’s population of 29 million knocks it further down the roster.

Texans are ⅓ as likely to find a job in AI as their New York counterparts, speaking strictly in per capita figures. With the state’s gargantuan search traffic for AI-related job terms of 337 per month, we can speculate that far more applicants are vying for far fewer jobs in Austin, Dallas, and other metro areas.

AI jobs like AI engineer, AI scientist, researcher, research analyst, AI developer, and AI programming specialist all make great candidates for remote work. Especially with the advent of the COVID-19 pandemic, remote work is an ever more acceptable option for U.S. firms both large and small.

Research by FlexJobs found a 159% increase in remote work in the past 12 years, with massive growth during the coronavirus lockdowns. Meanwhile, public interest in remote work continues to rise year-over-year, suggesting a public tide employers will have to cater to or be left behind.

Service and technical jobs in healthcare and manufacturing don’t lend themselves as well to remote work — though that is changing. By contrast, AI careers work increasingly-well in the post-COVID job market, as companies struggle to rework their business continuity plans to maintain revenue even during brick-and-mortar bans.

Remote pair programming and big data jobs can happen anywhere employees have a workstation and a set of noise-cancelling headphones. For these reasons, Even as remote AI jobs remain a small percentage of the overall job market, they’re almost certain to grow rapidly.

States with the Most Entry-Level AI Jobs

New York has 113 entry-level AI jobs on Indeed. That’s far behind California’s count of 351, but not far off the Massachusetts tally of 126. The Empire State barely beats out Virginia’s 110 jobs, but eclipses the otherwise robust Washington State showing of 84 entry-level artificial intelligence jobs.

States with the Fewest AI Jobs

The states above lack AI jobs for obvious reasons like weak tech economies and slim AI education programs. For instance, the biggest industry employers in Wyoming are agriculture, mining, utilities, construction, manufacturing, and wholesale trade — not heavy consumers of AI tech. The tech industry doesn’t make it into the top 20 in the Cowboy State (recently renamed the Equality State).

Plus, the top computer science school in Wyoming is the University of Wyoming, and it’s hard to find a runner up by searching Google. As great an institution as UW is, it doesn’t have an AI degree on offer. The mix of few tech companies and fewer tech schools at the university level paint a picture of a state not on the cutting edge of new AI employment.

The same story goes for the other six states on the list. Top industries are agriculture, mining, farming, transportation, tourism, oil, manufacturing, and seafood processing. A dearth of top-tier tech schools completes the circle, making these seven states more the fringes of AI than the hubs.

Reports of a mass exodus from cities could fuel AI job growth in states that corner the market on beauty and outdoor experiences. There are reports that city dwellers are looking for greener pastures during the COVID-19 pandemic. There’s some debate over whether these reports are true, but a survey of 2,478 U.S. adults by Fortune magazine in August found 8% of city dwellers are now more likely to ditch their concrete jungles.

If that summer sentiment holds up, we could see tens of millions of tech workers (and maybe even businesses) deserting the more populated areas and bringing their entry-level and senior AI jobs with them.

The insights in this article are drawn from data from Indeed.com and Google Trends. We analyzed Indeed job openings data in September 2020 for all 50 U.S. states. We also compiled online search data for AI jobs in all 50 states to get a picture of the job search competition in each area. We added to those insights by using keyword research tools to find approximate search numbers for the key terms in every state. Our research broke down the job searches into entry-level, mid-level, and senior-level AI positions, as well as salary level.

AI jobs are growing fast, with thousands of new AI careers popping up around the country, most notably in California, Virginia, New York, Washington, and Texas. Virginia is the sweet-spot surprise. Its 800+ AI engineer jobs, AI scientist jobs, artificial intelligence analyst jobs, and more fit into a relatively small state population of 8.5 million. That makes it the easiest state by far to find artificial intelligence jobs.

As this exciting new field continues to grow by leaps and bounds, we’ll see a net effect of 58 million more jobs in the next few years. As self-made billionaire Mark Cuban puts it, learn AI, invest in AI, or risk going the way of the dinosaur.

Google and Intel team up on new AI weather-prediction tool 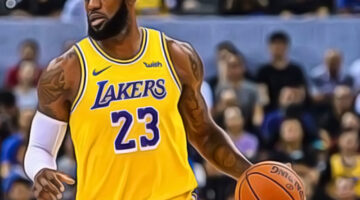 NBA using AI to engage with fans during coronavirus pandemic 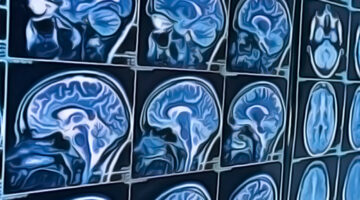