Event #19 of the 2021 WSOP is the $10,000 Seven Card Stud Championship tournament. This four-day event started on October 9 with 60-minute blind levels on Day 1 before switching to 90-minute blinds for the remaining three days.

Phil Hellmuth’s F-bomb-filled tirade dominated the event’s headlines and inspired bushels of social media debate during the tournament. But it was another player, Anthony Zinno, who dominated the totally stacked final table to win his third World Series of Poker bracelet, along with a first-place prize of $182,872.

Only 88 players played in this tournament in 2019, building a total prize pool of $827,200. Heads-up play came down to two members of the Poker Hall of Fame in six-time WSOP bracelet winner Daniel Negreanu and five-time bracelet winner John Hennigan. Hennigan ran hot in heads-up play to earn the win and the tournament’s top payout of $245,451. 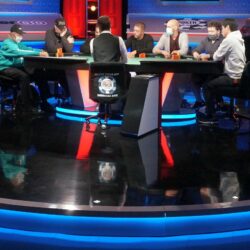 Anthony Zinno gets revenge on Phil Hellmuth for his blowup