Day one whittled the field from 3,247 down to 479. A small portion would be coming back to disappointment on Day 2 as only 404 players were to make the money. Despite the shifted time zone, the player base remained resolutely international with as many American and European players showing up as those from Asia.

Day 2 saw plenty of players fall in the early rounds.

Daniel Negreanu, Erik Seidel, and Kristen Bicknell all started the day with chips in front of them and were shown the door before the day was out.

Luckbox Parker Talbot also started the day with about twice the average stack (640,079).

Half a day given over to the digital felt passed and none of these pros had a chip left. Nor did anyone else but Assuncao Garla.

The final nine showed little sign of the moved time zone, with two players from India and one from China. The rest of the table was a grab bag: Brazil, Greece, Latvia, Lithuania, Spain, and the US.

2019 WSOP Main Event runner up Dario Sammartino had another close miss when he bombed out in 10th as the FT bubble boy.

Alan “TheCockroach” Schein, a tourney regular, quickly became the player to watch at the final table as he pulled off some unconventional play. Time and time again he hacked away at his opponent’s stacks. He came to the final table with the second biggest chip stack. But he was well behind Assuncao Garla’s enormous chip lead.

The fancy play couldn’t win out though, and Schein took 4th.

Assuncao Garla is a regular on the Brazilian poker scene. In 2014, he came 34th at the WSOP Main Event for $230,487. Most of his wins outside of that have been relatively small fry – mostly, three or four figures.

The final 9 finishers were as follows: 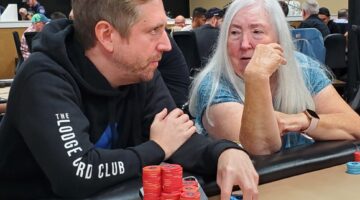