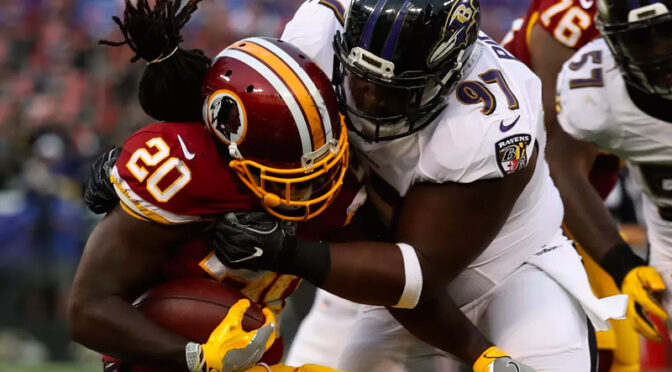 Sometimes in sports-betting you find spots where one team has such a dominating edge over the other that doing anything but clicking the bet button seems like over-thinking, or as I like to call it the ‘shrug and bet.’ In my opinion, such is the case in Week 4 with the Super Bowl favourites Baltimore Ravens travelling a stone’s throw away to take on the still unnamed Washington Football Team. In fact, if there was ever a time to ‘buy low’ on one of the most expensive teams in football (betting-wise), it’s after a lopsided loss on national television.

First off, as far as narrative-street is concerned, I can’t imagine that the embarrassment the Ravens franchise is feeling right now could do anything but fuel the desire to make its next showing the best of the season. And that should be worrying to their opponents considering they’ve already beaten the Texans by 17 and the Browns by 32, both markedly better teams that this current Washington one. Not only is Lamar Jackson’s mobility the perfect counter-weapon to Washington’s solitary strength on the football field – its defensive line – but the Ravens defense who was ranked as the best in the league ahead of facing its kryptonite – should feast against a Washington offense that ranks 31st in yards per play and 28th in QB sacks allowed. With only one true offensive threat in Terry McLaurin and a rushing game that’s averaged just 100 yards per game (25th) vs Baltimore’s 166 (5th), it’s hard to imagine where the points are going to come from for the Football Team.

And with the Ravens weakness of playing from behind not seeming like it should be a factor in this one, the game-plan for the Baltimore offense looks to be relatively simple: use a lot of quick throws to the TEs and RBs (Washington has already given up 245 yards and 4 TDs through the air to those positions in just 3 games) while putting Jackson in a position to use his incredible scrambling abilities to evade the rush and exploit the middle of the defense with his legs. If they can do that, as they have against nearly every team they’ve faced over the past couple of seasons, this one should have a very good shot at coasting past the BAL -13 betting line and an even better one at making teaser-bettors happy needing to cover just a 1 TD spread.

Ignore the noise, shrug and bet.