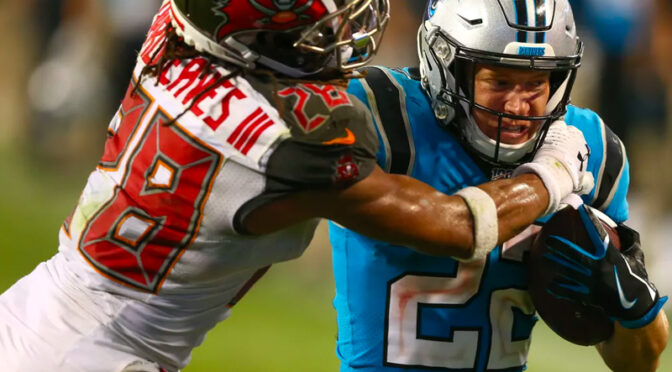 Continuing on with this week’s public overreaction column, today we feature the team recreational money was all over just one week ago and immediately began taking social-media heat after a lackluster performance against arguably the best team in the NFC. Fortunately for Buccaneers fans, Tom Legend Brady is no stranger to being left for dead after a poor outing or two. And of course, over the course of his career that hasn’t exactly worked out well for Brady haters, with Tom going an incredible 189-129-7 against the spread during his 20-year career.

This week Brady and the Bucs will look for a bounce-back game against a Carolina Panthers team that likely was made to look much stronger than they actually are while playing against a defensively exploitable Las Vegas Raiders team. Don’t get me wrong, I like the direction the Panthers are heading in as a franchise and have them as a candidate for exceeding their win total number this season, but this is not one of the weeks where I expect that progress to shine through.

For one, Carolina still has some glaring shortcomings in the secondary which I expect to get picked apart by perhaps the best defense-reading quarterback of all time who may just now have the most explosive weapons he’s had at any time during his career. No matter how you look at it, Carolina’s secondary is in for a long day with them not likely to have any answers for any one of Mike Evans, Chris Goodwin, or Rob Gronkowski, let alone all three. Furthermore, should the Panthers let Brady get off to a quick start as one would expect playing at home after getting some of the kinks out in Week 1, they’ll be hard-pressed to keep pace on the score-board with their biggest strength – RB stud CMC – being forced to going up against a defense that PFF ranked as the 9th best in the NFL and labeled as the dark horse for being the best in the league by season’s end.

All in all, I expect Brady and Co to make quick work of the inexperienced Carolina D (who PFF ranked dead last coming into the season) and force them to abandon their preferred game-plan early in an effort to play catch-up, something that feeds directly into the Buccaneers’ hands. As such, I’ll be playing the Bucs both as spread bets as well as within two-team teasers, and will load up in-game as well if they should somehow find themselves down early.