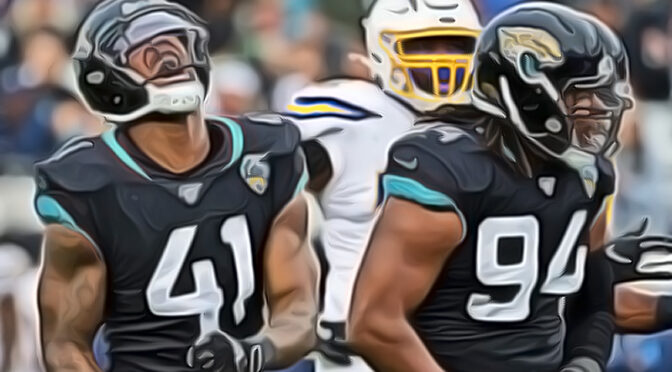 Yesterday I wrote about hoping aboard the Philip Rivers over/under ride in 2020 and today I’d like to swerve to the opposite direction and make a case for playing the Under when it comes to another member of the AFC South: the Jacksonville Jaguars u4.5 (-112 odds).

First off, it comes as no shock to anyone to say that the Jaguars are in rebuilding mode, having traded away QB Nick Foles just one year after signing him to an insane four-year, $91 million contract with more than $50 million guaranteed, the largest guaranteed contract in Jaguars history. From there Jacksonville also unloaded two of their top talents in DE Calais Campbell and CB AJ Bouye, the latter of which left them with a dangerously lacking secondary, one of their key shortcomings from last season. And while they did pick up a solid CB prospect in the draft with CJ Henderson, anchoring a secondary in a rookie year is an enormous expectation under the best of circumstances, but when considering the shortened COVID off-season, the task seemingly becomes an impossibility. Jaguars fans will also point to the signing of Joe Schobert as proof they can exceed expectations, but with a price-tag of nearly $54 million for a team with a near-infinite number of needs, this might be one signing that will look even worse in hindsight – particularly if Schobert gets exposed in coverage – as some analysts have projected him to do – which would leave the Jags’ already thin abilities in that department in for a world of hurt.

Additionally, with Jacksonville holding the league’s 10th toughest schedule, including 6 division games against the Colts, Titans, and Texans, they’ll need to sweep the likes of the Dolphins, Bengals, and Lions, while picking up additional games against teams like the Chargers, Bears, Steelers, Packers and Vikings to have a chance at clearing the Over. And while I enjoy myself as good of a dose of Minshew Magic as the next guy, betting the Over during (another) rebuild year, is not something that gets my sports-betting juices flowing; which is why I see the only options when it comes to the Jaguars’ season-win-total as either betting the Under or fading it entirely.