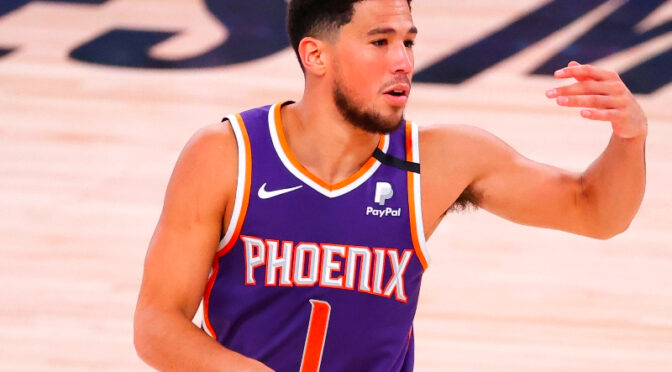 No team has been a bigger surprise during the NBA restart than the The Phoenix Suns, who have marched their way to a perfect 5-0 record while keeping their improbable chances of clinching the Western Conference’s final playoff spot alive. They’ve done so by showcasing the incredible talent of Devin Booker, who seems to have elevated his game since the the break with 3 30-point games already under his belt and seemingly an entire highlight-reel of heroics.

Today Booker and the Suns will take on an OKC team playing on the 2nd leg of a back to back who might be without both their starting and backup centers in Steven Adams and Nerlens Noel. In fact, with OKC having very little to play for until playoff time, there’s a possibility Billy Donovan will elect to rest a couple more starters in Chris Paul and Danilo Gallinari. And if either Adams or Noel are indeed ruled out and the Thunder are forced to give Mike Muscala heavy minutes, the Suns’ Deandre Ayton should be able to provide Booker all the help he needs.

With Phoenix’s two rising stars playing well, the Thunder likely rolling out their bench squad as starters, and the Suns hyper motivated to make the playoffs and try to shock the world, I’ll be looking for them to take full advantage of their short-handed opponent and keep the Bubble’s only unbeaten streak alive.

Missing starters will be the key once again in game number two with the Utah Jazz facing a Dallas Mavericks team that will be giving 5 players the day off including Luka Doncic, Kristaps Porzingis, and Dorian Finney-Smith as they look ahead to a back-to-back game against Portland tomorrow night. For the Jazz, Donovan Mitchell remains questionable as he was Saturday before scoring 35 points over 47 minutes in a thrilling OT loss to the Nuggets.

So assuming Mitchell is ready to play once again and no other late scratches develop from the Jazz, Utah will have a significant edge both in on-court talent and most likely endurance as well with the Mavs being down a third of their team. With that said, the line does seem a bit inflated thanks to the early roster news, potentially making this game appealing as part of a two-team teaser or live bet.