I need to preface this by saying I’ve long been a fan of Doug Polk’s YouTube channel, and even longer Daniel Negreanu. But the right thing to do is to call out those who cross the line of decency, even if you are a fan. In this case, the feuding poker pros are both more than deserving of being verbally ripped to shreds.

In case you’ve been living under a rock for the past, oh, five years, Negreanu and Polk don’t think too kindly of each other. They’re as pleasant towards each other as Donald Trump vs Hillary Clinton. The long-time dispute between the poker pros, in recent weeks, has gone from petty and childish to downright nasty. And in the next couple of months, the bitter rivals will finally settle their argument on the virtual felt in a high-stakes heads-up grudge match.

Polk hasn’t played poker regularly since 2018. He’s said multiple times over the past year that he gets anxiety from playing cards. The three-time WSOP bracelet winner became so disinterested in the game that he even retired his popular poker YouTube channel with over 290,000 subscribers earlier this year.

But apparently the cure for anxiety is a heads-up match against a despised foe. Who knew? Polk is coming out of retirement for the sole purpose of settling a score with someone he’s held a grudge against for years. And he’s already popped off on Negreanu with his first poker-related YouTube video in quite some time. Although Polk was his usual creative and funny self in the video, it was yet another example of just how unnecessarily petty this feud has become.

I can understand Negreanu’s disdain for Polk. Doug has relentlessly attacked him for years. But the GGPoker ambassador has crossed that fine line of decency in recent weeks.

Early in the WSOP.com Online Bracelet Series in July, Negreanu lashed out at the poker site during a live-stream. He cussed up a storm in response to getting disconnected from the app. Many poker fans on social media were critical of his behavior, but I thought it was kind of cool to see a celebrity of his status acting like a normal human being. I can’t even begin to estimate how many times I’ve cursed to high heavens after getting disconnected during an online poker game or when an opponent sucks out on the river. So, who am I to judge?

But there’s cursing and then there’s shaming the game of poker, which Negreanu has done multiple times in recent weeks. During another live-stream last month, a commenter named Tom Strada took a shot at Daniel’s wife, Amanda. This is how the Poker Hall of Famer responded:

Does that sound to you like the way a “poker ambassador” should speak, because it doesn’t to me. There isn’t an ambassador handbook available, but if there were, I’m fairly certain threatening to feed internet trolls their teeth anally would be considered a no-no.

Sadly, that wasn’t the end of Negreanu’s unprofessional behavior. ESPN poker commentator Norman Chad called out the GGPoker ambassador on Twitter for making violent threats against a live-stream commenter.

You followed that up by telling the guy you'd knock out his teeth and feed them to him anally.

How is it okay to physically threaten someone during your live stream?

You now say this was "tongue in cheek."

Then, rather than apologize for your behavior, you give a FU statement.

P.S. There has been no one in poker I have lavished more praise on than @RealKidPoker, on WSOP broadcasts, podcasts & sports talk radio. He’s done it right for so long.

This is not doing it right; I wish someone in his inner circle would say, “Bro, really? WTF?”

Negreanu took offense to those comments and, during his daily WSOP live-stream on August 5, went on yet another profanity-laced tirade, this time against Lon McEachern’s sidekick.

“F**k you, dude,” Negreanu said of Chad. “I’m thinking, this guy Norman Chad, I wanna say bad things to this guy. But that’s the thing, sometimes I write out tweets. I’ve written out like 17 to him that I’ve deleted. His obsession and his f*****g preachy nature, all he does is complain about other people preaching about what their beliefs are, and all non-stop he’s a preachy motherf****r. Preach, preach, preach, preach, preach from his perfect f*****g high-top place. Look, you don’t like it, I don’t give a f**k. I think I’ve made that clear. I don’t give a f**k what you think at all. You are not my mentor, my life guru. I do not follow your rules of living. You do you, you can say whatever the f**k you want to me. But I’m not going to listen to you, you dumbf**k. Enough. Move on to bigger and better things.”

Again, does this seem to you the way a so-called ambassador of the game should react to constructive criticism? To make matters worse, Negreanu also claimed that Chad told him that Jamie Kerstetter, who joined the ESPN WSOP broadcast in 2018, was a lousy commentator. This came after Kerstetter accused Negreanu of pulling some strings to have her removed from a commentator role for a recent live-streamed online poker event.

Chad vehemently denied to me the accusations and said, “I have never had an untoward word with Daniel Negreanu in person.” The long-time voice of the WSOP on ESPN, to my recollection, has never attacked Negreanu’s character during a broadcast either. In fact, he’s often praised the six-time bracelet winner’s character and playing abilities. So, for Negreanu to lash out like that against a respected member of the poker community — it’s uncalled for.

Negreanu has been way out of line recently. That doesn’t make him a horrible human being. He’s far from the monster some on poker Twitter make him out to be. But he owes the poker community an apology, and more specifically, Jamie Kerstetter, Norman Chad, and the commenter he threatened, personal apologies …. immediately.

Polk isn’t so innocent either

As poorly as Negreanu has behaved in the past month, Polk is also deserving of some criticism. The Upswing Poker founder has attacked Negreanu repeatedly in videos and on social media for years. And, in my opinion, that type of behavior is arguably just as uncalled for as threatening Twitter trolls and insulting a poker announcer.

Over the past five years, Polk has trashed Negreanu for suggesting he could beat the $25/$50 online stakes with minimal study, defending PokerStars for removing the SuperNova Elite rewards program, claiming that increased rake on PokerStars is better for the players, and for his character.

Polk, who is undoubtedly a master troll, took his Negreanu bashing to new heights in 2018. During the $300,000 buy-in Super High Roller Bowl that year, while seated next to his rival, he busted out a shirt that read, “More Rake is Better.” Everyone on poker Twitter got their laughs in over the shirt that was clearly mocking Negreanu’s defense of increased rake at PokerStars. But that was just the start of his infamous trolling effort of the six-time bracelet winner.

Days later, prior to the start of the 2018 World Series of Poker, Polk spent thousands of dollars on this billboard outside the Rio in Las Vegas, in plain sight for Negreanu to see every day that summer. 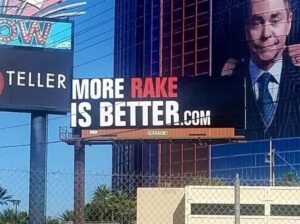 Much like Negreanu’s recent tirades, this action crossed the line of decency. And he’s continued his verbal assault on “Kid Poker” repeatedly over the past couple of years since. To me, that’s the behavior of someone who doesn’t have any room to question Negreanu’s character, or anyone’s for that matter.

This feud has carried on for so long only because Polk simply won’t let it go. Whether he’s using Negreanu for clicks or is really just that petty and won’t move on, I don’t know. Negreanu claims he has evidence that Polk is just using him to generate attention to his Upswing Poker site. Polk disputes that claim. I’m not sure which one to believe, and don’t particularly care because that’s totally irrelevant.

Hug it out, gentlemen

Polk and Negreanu will soon face off in a high-stakes heads-up battle at an undetermined poker site. It is my hope that afterwards, regardless of who wins, they’ll end this petty feud and shake hands. Or, at the very least, Polk will stop creating drama between the two.

The fact of the matter is these two poker greats are more alike than they’d like to admit. They’re both talented millionaire poker players, lean to the left politically, create content that thousands of people enjoy, have large fan followings, and help generate interest in the game of poker.

Personally, I’m a fan of both. My interactions with Negreanu have always been pleasant. He’s been one of the best ambassadors in poker history due to how he conducts himself at the table and promotes the game through social media. I’ve had a WSOP media pass each year since 2015 and have witnessed him sign autographs and take selfies with thousands of fans every summer. He’s more approachable to fans than any other player.

I’ve never met Doug Polk but have always enjoyed his YouTube content. He’s talented on the felt and from behind a camera. Upswing Poker is considered one of the best, if not the best, poker training sites in the world. What he’s done to help grow and promote the game of poker is immeasurable.

But these otherwise fine gentlemen need to put an end to this petty dispute once and for all. And Negreanu owes the poker community an apology for his despicable comments recently.