Diego Ventura put on a display in the partypoker Caribbean Poker Party Online Main Event that’s rarely seen in the realm of large-field online poker tournaments. The Peruvian poker pro emerged from Day 1B as the tournament chip leader, and then maintained that status through the end of Day 2, and Day 3.

Ventura entered final table action on Day 4 as the biggest stack among the remaining nine players, and by the tournament’s end was the last player standing. Ventura’s dominant run in Caribbean Poker Party Online Event #2: $5,300 Main Event ended with Ventura claiming the championship and the $879,894 first prize.

Ventura and Canada’s Grayson Ramage (2nd – $631,636) entered the final table as the two biggest stacks, and the heads-up battle for the Main Event championship came down to Ventura versus Ramage.

Ramage went into the final battle with a two-to-one chip lead, but Ventura managed to get back to even after 45 minutes of two-handed play. Both players held just over 500 million chips going into the tournament’s final hand, with the blinds at 3,000,000/6,000,000.

That hand started with Ramage opening to 15,000,000 with Q♦Q♥, and Ventura made the call with T♠8♣. The flop came 8♠3♣T♥, setting Ramage up for a disaster as his strong overpair was now behind Ventura’s top two pair.

The turn fell 2♦, Ventura checked, Ramage bet 111,000,000, and Ventura made the call, leaving each player with about a three-fourths pot-sized bet going into the river.

Fifth street came out the 7♥, Ventura checked again, Ramage shoved his remaining 300,778,260, and Ventura didn’t think it over too long before making the call. Ventura, who had a slight chip lead on Ramage going into the hand, clinched the nearly $880k payday with the win.

The $5,300 Main Event drew 1,037 total entries, with the prize pool going to $5,185,000 by the end of registration. Each of the top six finishers in the tournament ended up with six-figure prizes.

That $5.185 million total prize money made the Main Event the most lucrative tournament on the 11-event Caribbean Party Poker online schedule. A lineup full of some of poker’s most prolific tournament players managed to advance through the large field to make it to the final table. 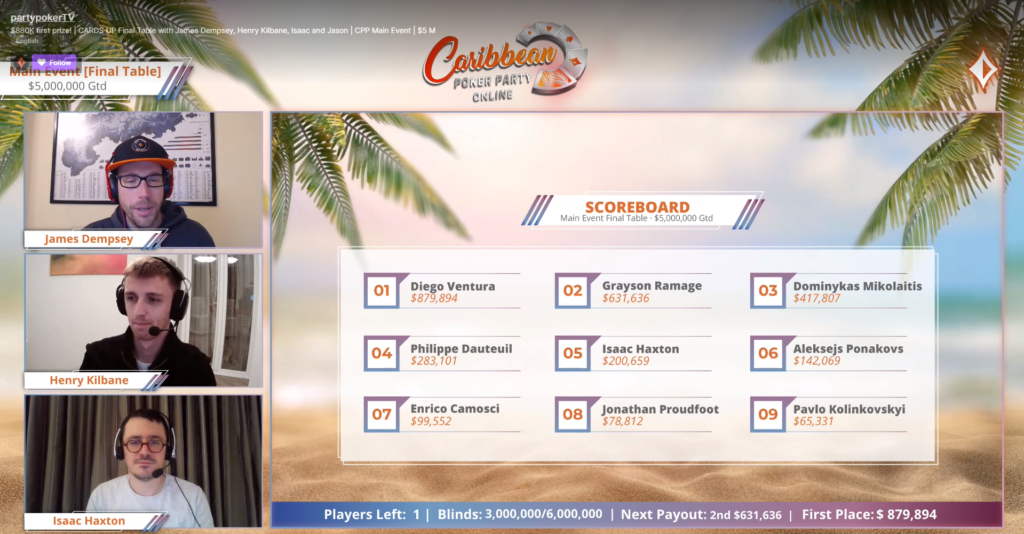 Other final table contenders included Lithuania’s Dominykas Mikolaitis (3rd – $417,807), who saw the last of his 20 big blinds evaporate in his final hand of the tournament against Ventura.

Facing a min-raise open from Ventura on the button, Mikolaitis three-bet jammed for that 20 big blind stack with A♥9♠ from the big blind. Mikolaitis saw Ventura make the call and turn over A♠J♠, putting the Lithuanian in bad shape going to the board. The cards fell Q♠K♥T♥3♥6♠, sealing the elimination of Mikolaitis.

Philippe D’Auteuil (4th – $283,101) finished among the six-figure winners at the final table, also exiting the tournament at the hands of Ventura. Other top-five finishers included Isaac Haxton (5th – $200,659). The partypoker ambassador jumped directly into commentary duties for the final stages of the Main Event from there.

The $879,894 Main Event winner’s purse won by Ventura represented the biggest payday awarded to any player at the 2020 Caribbean Poker Party Online. The No. 2 and No. 3 spots on that payout list both went to the same player, as Canada’s Pascal Lefrancois asserted his dominance in the pair of High Roller events on the CPP schedule.

Lefrancois outlasted Juan Pardo Dominguez (2nd – $184,736) in heads-up play, clinching the second title of the Caribbean Poker Online series for Lefrancois. The Canadian tournament stalwart came away as the only two-time winner from the festival.

Huge congratulations to 🇵🇪@DieVentura🇵🇪 who overcame the 2:1 chiplead of Grayson Ramage to become the 2020 Caribbean Poker Party Main Event Champion and win $879,894. pic.twitter.com/sR4hVkzkk8

First time ever for Caribbean Poker Party to move online

The Caribbean Poker Party usually takes place in the Bahamas each fall, with the venue and timing of the event making it one of the most popular live stops on the poker tournament calendar. The 2020 edition event was originally slated to emanate from the Baha Mar Resort this November.

Like most of the scheduled live poker festivals for 2020, however, this year’s Caribbean Poker Party couldn’t run as planned in the midst of the COVID-19 pandemic. The partypoker LIVE staple moved online for the first time this year, with the partypoker international client hosting the series Nov. 15-25.

“We’re obviously all bitterly disappointed that there’s not going to be a live version of the Caribbean Poker Party this year,” said partypoker LIVE President John Duthie in a press release announcing the series. “(B)ut get your trunks and shades, put a bit of fake tan on, pour yourself a drink and join us all for the Caribbean Poker Party Online; mine’s a piña colada!”

The online version of the Caribbean Poker Party ended up awarding more than $12 million across 11 events, attracting some of poker’s biggest names for the Main Event, the pair of High Roller events, and the other nine tournaments on the CPP Online schedule.