Who is Doug Polk?

Doug Polk is the part-owner of Upswing Poker and CoinCentral. He’s a poker influencer, poker-coach, a GS:GO semi-professional, and a “retired” professional poker player.

He is best known in the poker community as a high-stakes heads-up online pro and a social media personality.

In his social media capacity, he runs the Doug Polk YouTube channels. One of Polk’s channels is dedicated to commentary on poker current events, a medium in which he frequently takes controversial stands. His other channel focuses on the crypto market. A series of Youtube videos about Daniel Negreanu is one source of the two players’ rivalry.

As a high stakes pro, he was a key player in the heads up community, winning several high-profile matches against other players.

Doug Polk was born on December 16,1988, in Passadena, California.

He enjoyed competitive games from a young age, learning chess from his father at 5 years old. This love of games turned into a love of gaming. At the age of 15 he became involved in the esports scene. His main focus at this time was Warcraft 3, a real-time strategy game.

Polk’s passion for gaming has continued even to the present. He now runs a professional Counter Strike:Global Offensive team.

Going broke refocused his energies. He began a period of intense study of the game. By specializing in heads-up poker he rebuilt his bankroll and made a name for himself. By 2013 he was widely considered one of the best heads-up poker players in the world. That year, he competed in a highly publicized heads up match against Brian Sulsky, winning $740,000 over 15,000 hands.

That success led to his participation in a test match against Claudico in 2015, a poker-A.I. built by Carnegie Mellon.

He won his third WSOP bracelet in the $111,111 One Drop High Roller at the WSOP in 2017, bringing his face and name to an even wider audience. He retired from poker the next year, and was rarely seen playing until he took on Daniel Negreanu in a month-long heads up match in 2020/2021. He won that match and retired again.

He says he has no intention of playing poker again, but does not rule out the possibility that his enthusiasm might rekindle for the card game on which he left such a mark.

Doug Polk has lifetime live tournament cashes of $9,454,008. These cashes include three first-place finishes in WSOP bracelet events. His bracelets are in:

Polk was also a profitable player in the highest stakes online heads-up cash games and sit’n’goes. There, he played under the handle WCGRider. He made about $1.5 million on Full Tilt, after FT returned to the market post-Black Friday. Records from before that are sketchy.

A Twitter spat with Luke Schwartz escalated in 2018, becoming one of several high-profile schisms that Polk was party to. Schwartz suggested that Upswing Poker was a scam, triggering a long series of public insults.

Polk retired from poker in 2018, though he continued to make videos about the poker community.

After his match with Negreanu in 2020/2021 he said he would not be returning to the poker world again. Instead he is focusing on his CS:GO team and on cryptocurrency.

What is Doug Polk’s Net Worth?

Doug Polk has an estimated net worth of around $10 million. According to Polk himself, he amassed this wealth largely through playing online poker and through investment in the cryptocurrency markets.

In 2020 he tweeted: “My lifetime youtube revenue is aprox 250k. I spent probably 300-400k making that content. It’s a loss leader. Upswing has made millions of dollars though. But I have still made way more from poker + bitcoin” 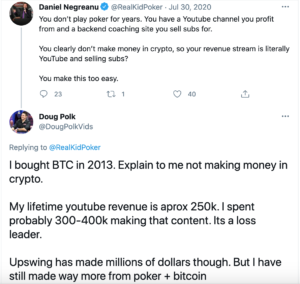 Polk is also the founder of two businesses: Upswing Poker and CoinCentral.

Upswing Poker is a successful poker coaching site. Polk estimates that he has made millions from the business.

CoinCentral is an online cryptocurrency resource. The website says the site has the goal of becoming “the most trusted publication in crypto.” Polk’s profits from this business are likely to be much lower.

Polk was considered a favorite due to his heads up experience. Negreanu was the underdog, despite being one of the best all-around players in the world and long-time profitable player in the Big Game in Vegas. Doug Polk’s specialism in heads-up play and access to a cutting edge AI analysis tool made him the favorite.

The first session was played live in the PokerGO Studio, with the rest live-streamed with cards down on Twitch.

Over several months in late-2020/early-2021, Negreanu and Polk played out the 25,000 hands. Both sides employed a team of coaches and analysts. The final result was a loss for Negreanu, with Doug Polk making a $1.2 million profit, not including any side bets he may have taken.

Read the latest about Doug Polk News, Player Profile, Biography, and Net Worth