Phil Galfond made a declaration on Twitter last week, stating that he had long underestimated Phil Hellmuth’s ability at the poker table. That tweet from the Run It Once Poker founder has certainly sparked much debate from the poker community on social media.

Fedor Holz is the latest big name to chime in on the debate, but the high-stakes tournament legend known as ‘CrownUpGuy’ doesn’t share Galfond’s positive take on Hellmuth’s poker acumen. Holz added his thoughts in the ever-growing thread of replies to Galfond’s original tweet.

Galfond’s original tweet included an extended commentary on how Hellmuth’s performance against Antonio Esfandiari in Round 2 of PokerGO’s High Stakes Duel led to a change of opinion in Galfond’s assessment of Hellmuth’s ability. Hellmuth bested Esfandiari in the episode to go up 2-0 in the matchup between two of poker’s most iconic figures.

“What I will say, is that after watching those two matches, my perception of Phil Hellmuth’s game changed dramatically (for the better),” wrote Galfond. “What I saw wasn’t HUNL technical mastery. It was an uncanny ability to assess and adapt to every spot he found himself in.”

Holz, however, isn’t convinced that the High Stakes Duel performance from Hellmuth is an indicator of elite poker mastery. 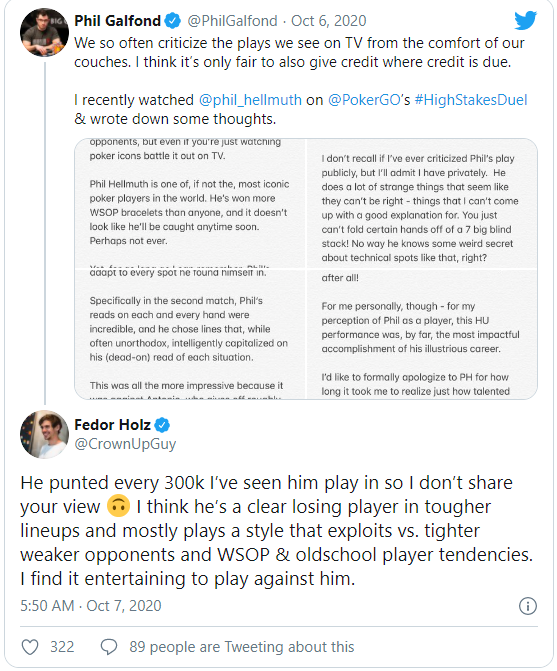 “He punted every 300k I’ve seen him play so I don’t share your view,” Holz tweeted to Galfond. “I think he’s a clear losing player in tougher lineups and mostly plays a style that exploits vs. tighter weaker opponents and WSOP & old-school player tendencies. I find it entertaining to play against him.”

The two players have arrived at those totals on very different paths, however. Hellmuth is a 15-time WSOP bracelet winner and an iconic figure spanning more than three decades of poker. Most of those bracelet wins have come in large-field tournaments at the WSOP, and not at the high-roller stakes regularly played by Holz.

Holz, on the other hand, isn’t even 30 years old, and has built his poker legend on his results at the nosebleed tournament stakes. Since his first tournament cash in 2012, Holz has posted seven-figure cashes eight times. Hellmuth has four seven-figure results in a 33-year career of tournament play according to Hendon Mob stats.

Hellmuth, in predictable fashion, defended his ability against Holz’ criticism.

1 I wasn’t expecting you to attack my play @CrownUpGuy! Personally, I always had respect for the generation that came before me. Respect for the guys that plowed the road for me. It’s true, I did punt 2-3 $300,000 buy-ins that I played in w you. I respect winners, even if… https://t.co/psJgZFTx54

“I wasn’t expecting you to attack my play @CrownUpGuy! Personally, I always had respect for the generation that came before me. Respect for the guys that plowed the road for me. It’s true, I did punt 2-3 $300,000 buy-ins that I played in w you,” Hellmuth tweeted.

Hellmuth continued that he plans on adding to his legacy at the WSOP for the next 25 years, and hopes to earn the respect of the German high-stakes crusher Holz at some point.

“I respect you Fedor, and I respect the big winners in poker whose strategies that I don’t agree with. I hope that I can continue to win @WSOP bracelets for the next 25 years and prove to you, someday, that my strategies, although unconventional, are top notch,” Hellmuth wrote.