Fedor Holz came out victorious in his four-session heads-up no-limit hold’em match against Wiktor “Limitless” Malinowski. The German poker star took a sizable defeat in the final session, but ended up on top overall.

Holz entered the final session with a massive, almost insurmountable lead. He only needed to hold onto a $150,000 lead to win the challenge on Saturday.

Holz’ victory adds to his already amazing poker resume. He’s won millions online already, and he’s only 27 years old. On the live tournament scene, he’s one of the best ever to play the game. The German poker sensation has $32 million in live tournament cashes, which includes two WSOP bracelets, his first in the $111,111 High Roller for One Drop in 2018 for $4,981,775, and his second last summer on GGPoker in the WSOP Online Bracelet Series ($25,000 People’s Choice Event for $1,077,250).

Fedor Holz does it again

This past week, Holz took on a different type of challenge — a heads-up challenge against one of the top high-stakes online players. And like most of his previous battles, he came out victorious.

The match streamed live on the GGPoker YouTube channel, with Joey Ingram handling the commentary duties throughout. If you missed out on watching the challenge live, you can catch all the action any time you’d like on YouTube.

Despite engaging in some pre-challenge trash talk, the competitors were cordial throughout the competition. Afterwards, during the post-game interview on the GGPoker YouTube channel, Malinowski congratulated his opponent, and Holz was gracious in victory.

According to the PokerShares poker betting platform, Holz was an underdog heading into the match. But the favorite doesn’t always win, as we saw this time.

Malinowski has another heads-up challenge in the works. He will soon face Daniel Negreanu’s coach, M.J. Gonzalez for $3 million in a live poker match that will air on PokerGO.

The date and format for that event hasn’t been finalized yet. But Gonzales announced the upcoming challenge recently on PokerGO’s podcast, “No Gamble No Future.”

Malinowski, who lives in Poland, will travel to Las Vegas to compete in the match. Gonzales doesn’t have to travel . He lives in Las Vegas. 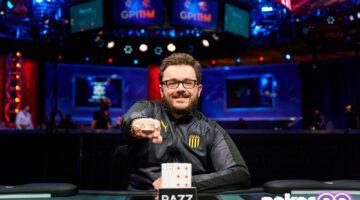