One of the most beloved programs from the golden age of poker television is making a comeback in 2020.

Details are still sparse at the moment, but a tweet from PokerGO host Nick Schulman appears to confirm that a reboot of the High Stakes Poker series is coming sometime before the end of the year.

It is with great pleasure to confirm the return of the esteemed, the legendary, the only, the original, the iconic, really needing no introduction the world over, back for another run. 2020, details soon 🔥 pic.twitter.com/7le94kzsCA

In the tweet, Schulman describes High Stakes Poker with sentiments shared by many who remember the show’s original run from 2006-2011.

“It is with great pleasure to confirm the return of the esteemed, the legendary, the only, the original, the iconic, really needing no introduction the world over, back for another run. 2020, details soon,” Schulman tweeted.

The first run of High Stakes Poker featured a who’s who of high-stakes players from the poker boom era of the 2000s, some of whom would put $1 million or more on the table. Those big buy-ins featured not only poker chips but massive bricks of cash that became synonymous with the show.

High Stakes Poker produced seven seasons in the show’s first go-around,  airing on the Game Show Network. Modern-era fans of the show were relegated to finding clips of the show on YouTube in the years following the final season.

“Bringing the existing episodes of High Stakes Poker to our platform and producing more in the future will enable us to recapture the nostalgia and magic of the show for our PokerGO subscribers in the present-day poker climate.”

Remarkably, that list is just a small sample of the big-name poker personalities that came across the screen during the program’s original run. With High Stakes Poker slated to make a 2020 comeback, the poker world eagerly awaits. 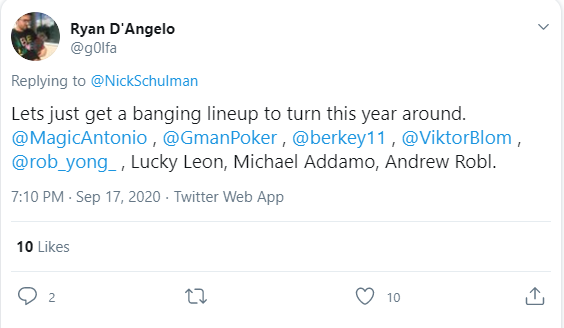 Those names would make for can’t-miss poker programming in 2020, and poker fans of all eras have something to look forward to in the High Stakes Poker reboot.