The 2021 WSOP Event #58: $1,000 Super Seniors No-Limit Hold’em saw a brief return from the Godfather of poker, Doyle Brunson. Brunson had mentioned ahead of this year’s World Series of Poker that he would be playing “a few select events.” It turned out that the first of those events was to be the 2021 WSOP Super Seniors event.

It wasn’t the best start to the series for Doyle. He only lasted about an hour after Mori Eskandani — PokerGO’s head honcho — escorted Doyle to his seat. First hand, Doyle ran into pocket kings, and it didn’t get much better for him after that.

Doyle’s short run meant there were a lot of players who could claim to have outlasted a legend that day. Among them was Jean-Luc Adam, who eventually took down the tournament.

Among the field were other legends that Adam had to beat including Barry Greenstein, Chris Moneymaker, and Sammy Farha.

Salomon’s mines ran dry quickly during heads-up play. Salomon tried a semi-bluff all-in with an inside straight draw on the flop and ran into Adam’s top two pair. The turn and river were no help, and Salomon hit the rail in second for $157,986.

Adam effused about his family in his post-game interview. Especially his son, who he says taught him to play poker.

“The most important thing to me is my family,” Adam told the press. “My wife, my daughter, and my son. My son plays poker well. Very well. He taught me. My family is the most important in my life. I have a very nice family and of course, I am thinking first of them. It’s very, very nice. A very nice sensation.”

“I’m dreaming,” Adam said. “It is very strange — a strange sensation. I felt good for all of the tournament and I felt very relaxed. I never think about first place but only play every hand. It’s a very nice moment. […] I don’t understand now. It’s too soon. I just finished the tournament. I can’t realize exactly everything now. I am thinking first of my family.”

No doubt the feeling of being a quarter-mill richer will set in eventually. 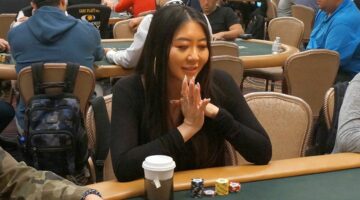