The inaugural event for the Midway Poker Tour ended in disaster Sunday, with players finishing in the top money spots unable to claim their full payouts.

PokerNews Head of Live Reporting Chad Holloway was on hand for the Chicago-area event over the weekend. His accounts of what went down on the tournament’s final day paint a picture of one of the most disastrous endings to a live event in recent memory.

Player payouts sit at the center of the controversy, as the top finishers in the Midway Poker Tour Chicago $1,100 Main Event were greeted at the payout table with something other than a full cash payout. Instead, any player clinching more than a $1,600 finish received a combination of cash and precious metals.

Those players receiving such payouts were unable to confirm the actual cash value of the precious metals at the time of receipt. The resulting situation saw the MPT Main Event’s top finishers come away with prizes that might not actually be worth the cash equivalent of the promised payouts.

Illinois’ live poker rooms are shut down due to COVID-19, but the charity partnership allowed the event to run in Illinois legally as a charity gaming event. Under the state’s Charitable Games Act, however, charity gaming events can only pay a maximum of $500 as a cash prize.

The MPT and 4 KIDS Sake originally planned to have a precious metals broker on-site, allowing players to immediately sell the precious metals for the cash equivalent advertised in the Main Event payout structure.

Sometime before Sunday’s final-day action, however, the Illinois Attorney General’s office informed tournament organizers that the on-site buying and selling of the precious metals weren’t permitted. By law, the MPT/4 KIDS Sake tournament officials had to come up with over $200,000 in precious metals by Sunday, enough to cover all payouts over $1,600 for the final 31 players.

The Midway Poker Tour, according to Holloway’s in-person reporting at the event, left charity officials with the task of coming up with the $208,000 in required precious metals. As Sunday’s action played out, players that headed to the payout table encountered an unexpected dilemma. 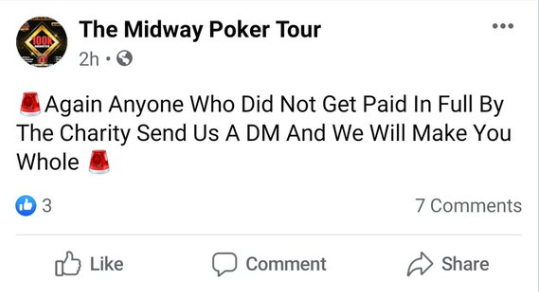 The 4 KIDS Sake charity had to pay retail price for a $208,000 silver order, meaning the silver paid out to the players was given at the retail price. That left players on their own to find a way to convert the silver to cash.

Because players received the silver portion of their payouts at retail price, they were now faced with finding a way to sell that silver, off-site, with virtually no way of receiving the true cash equivalent of the silver. The retail markup, plus fees incurred, all but ensured that players would end up with cash sums that fell short of the promised payouts.

As Sunday’s Day 2 flight played out, players going to the payout table realized that the silver they received wouldn’t end up as the true cash equivalent of their tournament payout. The final six finishers in the tournament were all expected to receive five-figure payouts.

According to Holloway’s reporting on PokerNews, the tournament descended into chaos at some point during final table play. Many of the eliminated players began to realize the true nature of the payout situation, and the tournament was paused with ten players remaining.

After a discussion, the final ten decided to play out the tournament, with Renato Spahiu eventually taking down the championship. Whether Spahiu will receive the full value of the promised first-place payout of $55,060 is currently unknown.

A thread on the TwoPlusTwo poker forums reveals a few more details on the tournament, appearing to reveal player fears about the legitimacy of the event even before the start. The original poster, ‘isjfklds’, alleges that the registration process required the use of a PokerBros account.

“I show up on Saturday to register, and they tell me I need to enter my PokerBros player ID, and if I don’t have pokerbros I’ll need to download the app and create an account and they’ll also send me some free money to load my account,” wrote ‘isjfklds’ in the post. “Uhh, ok already shadiness with them giving me their sales pitch for their PokerBros affiliate account. I signed up for PokerBros, and then entered the tournament with $1,100 cash.” 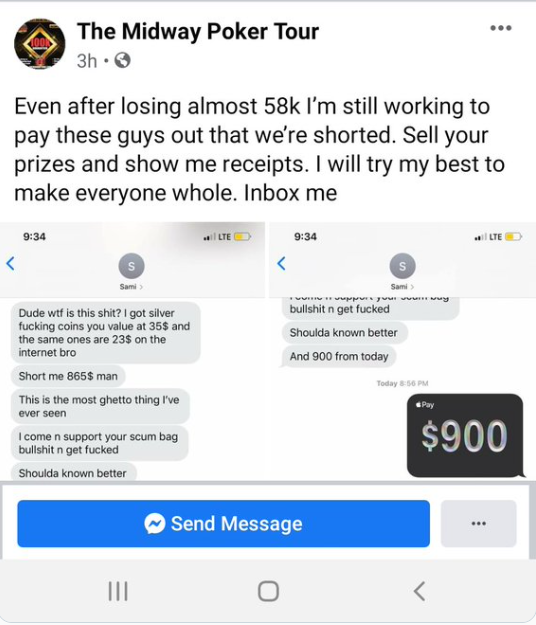 ‘isjfklds’ continues by saying that tournament officials announced the $1,600 max payout situation, and explained that the balance of payouts higher than $1,600 would be paid in precious metals.

“Apparently they bought a bunch of precious metals from some guy and were planning on having him onsite to immediately convert the precious metals to cash, but then the attorney general found out about this and said they absolutely cannot convert the precious metals on-site as it would be illegal,” wrote ‘isjfklds’ in the post. “I got the impression that the Attorney General was not happy with the event overall. They also informed us that they would give us the contact info for the precious metals guy and we could contact him to sell the metals. But of course, I have to assume he’s taking some sort of commission, so now we’re paying additional rake that wasn’t advertised.”

“I got some info from the staff working the event and they informed me that the TD they hired for the event opted not to come back for Day 2 because of the situation, and the owner/founder of the tour, Dan Bekavac, has not been on-site for 24 hours. He’s essentially disappeared.”

“Even after losing almost 58k I’m still working to pay these guys out that we’re shorted,” reads a post on the MPT Facebook page. “Sell your prizes and show me receipts. I will try my best to make everyone whole. Inbox me.”

Poker.org will keep updating this situation as more details emerge. At least one player, 20th-place finisher Bryant Miller, stated on Twitter that Midway Poker Tour officials have compensated him for potentially lost money.

How to play online poker for real money

What is a Royal Flush in Poker? Everything You Need to Know