Poker in the Wild West: A Lodge Trip Report (Part 2)

Where were we? Yes, I was describing what it’s like playing at the Lodge in Round Rock (hard on the shores of Austin), Texas. You can read the first part here.

I had told you how the new part-owners, Doug Polk, Andrew Neeme, and Brad Owen, had removed the “Match the Stack” (MTS) feature from the games. A change which I heartily applaud, and feel was absolutely necessary to preserve the health of the poker ecosystem.

They made another big change, and again, it was vital to the ongoing health of Texas poker…

They capped the bomb pots. For the uninitiated, a bomb pot is one in which all players put up a fixed ante and the cards are dealt as normal, but before there’s any betting, the dealer puts out the flop. Action then proceeds normally from the small blind position.

But in Texas–because Texas–the most common form of a bomb pot is double board pot-limit Omaha. Meaning that people who have played nothing but no-limit hold’em their entire poker careers are coping with (1) four cards, (2) Omaha rules (i.e. exactly two cards from your hand), and (3) the concept of two boards and a split pot. The mistakes are frequent and often lethal, particularly for new and weaker players. On top of it, few players fully grasp the implications of the entire table seeing the flop with two four random cards.

Now combine all that with MTS and you see what can and does happen. A new or weak player goes on a lucky run and turns their $200 buy-in into $2000. All the tough players at the table top up to ensure they cover that player. A new dealer pushes into the box, which is the usual trigger for a bomb pot. Four cards are pitched around the table, two flops are put out, and the lucky amateur discovers that they’ve flopped a set on one of the boards. I mean, everybody knows that a set is a ticket to the river, right? By the time the dust clears, the amateur’s set is crushed by the nut straight, and they had zero equity on the other board – they didn’t know the importance of having equity on both boards. So two pros carve up our hero’s $2000, and instead of their best day of poker ever, our friend has their worst.

I note that both the MTS and bomb pot cap decisions came on the heels of a survey that the new managers made available at the registration desk. You can read the results of that survey, and the thinking behind the changes here.  But suffice to say, were I on Doug’s team, I’d have been hoping for those exact survey results. The changes benefit all concerned.

Let’s step away from the table for an orbit, get a drink, and have a snack. Toward the back of the room, they have a big purple slide. 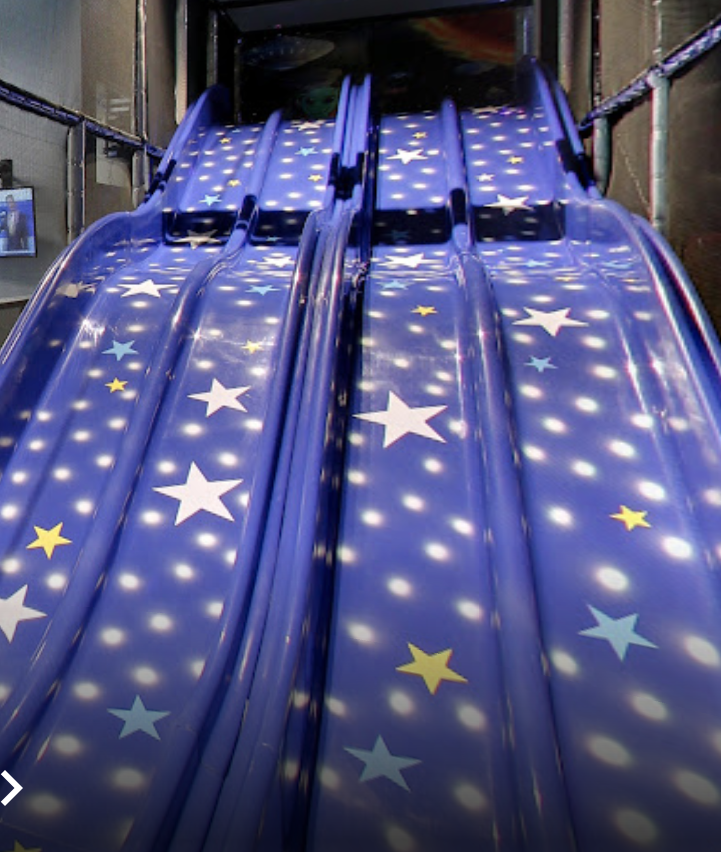 Been on a downswing?

Wait, no they don’t. That was PlayMazing, the previous occupant of The Lodge’s current quarters. But The Lodges does have a cooler full of sodas free for the taking. [Aside to the management team: Diet Mountain Dew and sparkling water, please and thank you.] And baskets of junk food, a buck or two for each one. There’s a glass jar where you put your money, taking change as needed. It all adds further to the “home game” feel of the room.

Unfortunately, there is no food service per se, but in the afternoons, an individual contractor sets up a little lunch counter in the back next to the soda fridge. Maybe it’s pot roast today, mushroom chicken tomorrow. It’s plain but comforting fare, $10 for a meal. Many players consider it a great opportunity to eat tableside and never have to leave the building. If you do want to leave, there’s a vegetarian Indian restaurant, a taqueria, Whataburger, Outback steakhouse, and a health food café, all within a five-minute walk.

I’m here for the vibe

I mentioned the “home game” feel of the place. I need to say something about that, and the vibe in general.

All poker rooms have a vibe. The vibe can have different frequencies and resonate across different spectra, but any poker player recognizes that vibe within minutes.

The Lodge vibe is a good one, perhaps retaining echoes of the previous tenant in the building. For lack of a better word, I’ll call it “celebratory.” To be sure, there is cutthroat poker taking place 24/7, and all the players are trying to win each other’s money. But maybe it’s because safe public poker is still relatively new. Maybe it’s the light airy ambience.

While I was there, Andrew Neeme and Brad Owen were hosting one of their famous “meet-up games” (MUGs). People had come in from miles around–some even flying in–just to rub elbows and play double board PLO bomb pots with those guys. While the MUG was going on, the room was effervescent. I’ve never used that adjective to describe a poker room, and it’s a delight to do so.

Being at the Lodge made me proud to be a poker player and part of the poker community. I can’t always say that, and I’m grateful when I can.

Ease up with the straddles

Every report card, no matter how positive, has an “areas for improvement” section, and here’s mine for the Lodge. It has just a single component, but it’s an important one.

Along with the match-the-stack and uncapped bomb pot shenanigans, unlimited straddles have made the jump from the underground game world into the social clubs. Such unlimited straddles are a threat to bankroll health and the player ecosystem. I’m not even sure what the straddle rules are at the Lodge. I know that they can only start under-the-gun (UTG), thank god. And they must be at least twice the big blind. This is reasonable and standard.

However, it appears that the straddle can be as big as the straddler wishes, and, frighteningly, there can be multiple live straddles, each doubling (at least) the last. I was in one $1/2 pot where there was a $5 straddle, a $10 straddle, and then a $20 straddle. Let’s do some math…

The buy-in cap in the $1/2 game is $300. With a $20 straddle, the buy-in cap is now 15 effective big blinds. And we’re primed for a handful of stacks to go into the pot. This is analogous to the MTS and double board PLO bomb pots. We’ve poured gasoline all over the table and handed everybody a box of matches – something bad is going to happen.

More than once, I saw the pros/sharps using “straddle machismo” to maneuver weaker players into traps: “If you’ll put on the $10 straddle, I’ll put on the $20.”  Does a new and/or weak player realize that if there’s a $20 straddle on, and they have a $400 stack, that they’re now sitting on “20 bigs,” as the tournament guys would say? And that their only real options are to fold or reshove a stack? No, of course not.

Every successive straddle halves the effective stacks. So three straddles mean that effective stacks are reduced to 12.5% of their original size. Poker playing as we know it goes out the window, only the people with their push/fold charts memorized have an edge, and – again – the new and weak players are wounded prey.

Doug, et al, if you all want to have unlimited live straddles in that monster game you play on the live stream, awesome. Maybe even allow them in the occasional $5/10 game. But you were wise to cap your bomb pots and eliminate match-the-stack. Use that same wisdom to limit straddles to one (and in my perfect world) exactly double the big blind, not more. There’s plenty of action in your games and plenty of gambling. You don’t need more action, particularly at the cost of your weaker players getting slaughtered because they’re unwittingly playing 12 or 15 BB stacks.

I don’t know the secret sauce that makes the Lodge feel the way it does. It’s certainly some function of the things I wrote above, and maybe some things I’ve overlooked.

Well, one thing I did overlook and will address immediately: the staff is courteous and efficient. The dealers are, with few exceptions, excellent at their jobs and pleasant. That is the huge part of the success or failure of any poker room, and the people running the Lodge – from shift managers to the kid filling the soda fridge – do their jobs professionally and with a smile on their face.

Whatever the magic formula is, I hope it continues. In both game management and poker rules, the Lodge is using the best practices that will make the experience great for everybody from the once-a-month tournament player to the six-days-a-week pro grinder.

I look forward to my next visit.